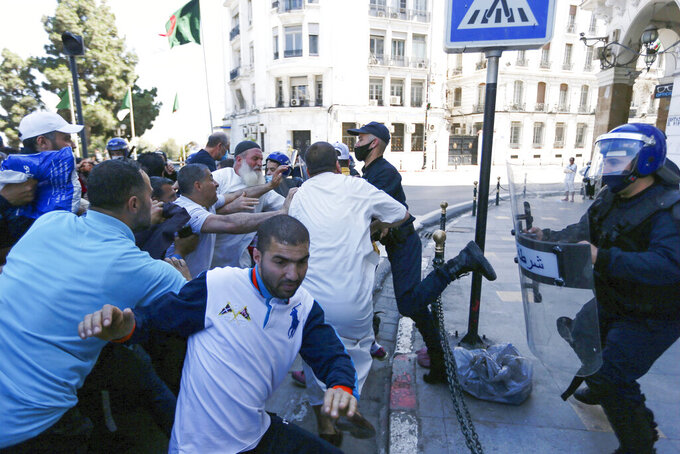 FILE - In this May 7, 2021 file photo, demonstrators supporting the Hirak pro-democracy movement are pushed by police officers in Algiers, Friday, May 7, 2021. A crackdown on the pro-democracy Hirak movement, with hundreds arrested around Algeria during last week's 117th Friday march, casts a pall over presidential efforts to give a new face to a nation whose army plays a backseat role in governance. (AP Photo/Anis Belghoul, File)

ALGIERS, Algeria (AP) — Candidates hopeful of winning one of the 407 seats in the Algerian parliament kicked off campaigning this week for next month's legislative elections under a new system meant to weed out corruption and open voter rolls — a major step in President Abdelmadjid Tebboune’s promise of a “new Algeria.”

But a crackdown on the pro-democracy Hirak movement, with hundreds arrested during a 117th weekly march last Friday, casts a pall over presidential efforts to give a new face to a nation whose army plays a backseat role in governance.

This Friday, police fanned out throughout the avenues and boulevards of central Algiers to prevent a protest from happening at all.

As people emerged from weekly mosque prayers, some shouted “Algeria, Democracy!," the usual rallying cry for Hirak activists. But uniformed and plainclothes security officers swiftly moved in to disperse or herd them into police vans to prevent crows from gathering. Internet access appeared to be cut or limited in the center of the capital, Algiers.

Hirak supporters, including parties from the so-called “democratic movement,” have vowed to boycott the June 12 legislative elections — the first since former President Abdelaziz Bouteflika was forced from office in 2019 after 20 years in power. It was pressure from marchers of the Hirak movement and from the army chief at the time that decided Bouteflika’s fate.

There is an unprecedented number of candidates — nearly 1,500 lists for the North African nation’s 58 regions, with hundreds of others weeded out by the Independent National Elections Authority. The voting is earlier than originally planned, after the president dissolved parliament in February. Parity between male and female candidates is among new rules governing the elections.

The current army chief, Gen. Said Chanegriha, warned on Wednesday “adventurers, whatever their (political) obedience or ideological views, against any attempts to attack national unity.” He vowed that “abject designs” would be uncovered, but gave no hint which “adventurers” he might have in mind.

The speech came a day after the High Security Council decided to name two groups that take part in Hirak marches as “terrorist organizations" — Rachad, whose leaders are in Europe, and the Movement for Self-Determination of Kabylie, the home of Berbers. Rachad is alleged to have links with a banned Islamist party, which it denies.

The tide turned on Hirak when protesters returned to the streets Feb. 22 after a yearlong pause to its Friday marches due to the coronavirus. The marches have drawn fewer supporters than in their first year amid rumors of the presence of militants from Rachad, along with arrests by security forces.

Earlier this month, the Interior Ministry ordered Hirak to get authorization for marches and specify the march route and organizers.

For political scientist Noureddine Grime, the order showcases the government’s determination to do away with Hirak. “The organizers of the demonstrations are the Algerian people,” he said.

Among those arrested, numerous protesters are being held for attacking national unity.

Among them is Kenza Khettou, a reporter for Radio M, arrested at last week’s march and awaiting trial Tuesday on that and other charges, according to the daily El Watan. Another well-known journalist who risks an eventual trial for attacking national unity is El Kadi Ihsane, head of Radio M and the online publication Maghreb Emergent, according to local media. He allegedly was on the radar for an article he wrote about the group Rachad.

President Tebboune has worked to clean up Algerian politics in what appears to be in part a bid to appease protesters of Hirak. Corruption flourished under Bouteflika, and numerous people linked to the regime have been jailed, including Bouteflika's brother.

Campaigning to choose new lawmakers began on Thursday for the many hopefuls — 1,483 candidates’ lists, with 646 representing political parties and 837 independents, including young people and women.

“The massive participation of youth, university teachers, women has confused the enemies of Algeria,” Communications Minister Amar Belhimer said Thursday on national radio, renewing suggestions of a hidden plot against the nation.