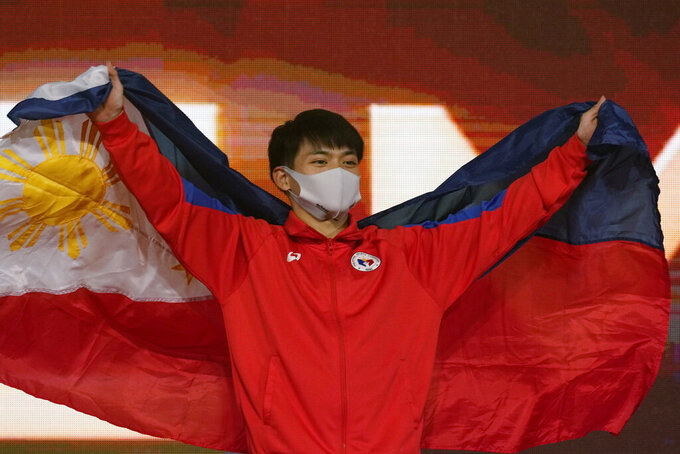 Carlos Edriel Yulo, of the Philippines, poses during the victory ceremony for the the vault final in the FIG Artistic Gymnastics World Championships in Kitakyushu, western Japan, Sunday, Oct. 24, 2021. (AP Photo/Hiro Komae)

Uchimura, who last won the horizontal bar world title in 2015, was sixth with 14.600 points in what could have been his last world championships.

Uchimura fell from the horizontal bar during the Tokyo Olympics and did not qualify for the final, won by Hashimoto.

It was not how the 32-year-old legend wanted to end his career and if Sunday was his final performance it was one he could be proud of. He completed all the elements and had a clean landing that received a standing ovation from the crowd at Kitakyushu General Gymnasium.

A native of Kitakyushu, Uchimura held up a T-shirt after his performance that read “Arigatou Kitakyushu.”

“I can’t begin to describe how good it feels to perform in front of a crowd,” Uchimura said. “This is my birthplace and I could feel the warmth from the crowd. I felt like they were waiting for me and and it felt good to perform for them.”

It was the second gold medal on the day for Hu. He also won the parallel bars with 15.466 points.

Carlos Yulo of the Philippines, who lost his title in the floor exercise on Saturday due to a costly mistake, took silver with 15.300 points while Hu’s compatriot Shi Cong took the bronze with 15.066.

Yulo won the men’s vault final with 14.916 points followed by Hidenobu Yonekura of Japan with 14.866. Andrey Medvedev of Israel was third with 14.649.

Mai Murakami, appearing in her last worlds before retiring, took gold in the floor exercise with 14.066 points. Women’s all-around champion Angelina Melnikova claimed silver with 14.000 while Leanne Wong of the United States won the bronze with 13.833.

Urara Ashikawa of Japan took gold in the women’s balance beam final, scoring 14.100 points to finish ahead of Pauline Schaefer-Betz of Germany who was second with 13.800. Murakami was third with 13.733 to win her first medal of the night.

Melnikova fell early in her routine and finished seventh with 12.400 points, one place behind vault gold medalist Rebeca Andrade of Brazil who received 12.500 points.

China topped the medals table with five gold medals, one silver and two bronze. Host Japan was second with two gold, five silver and one bronze while Italy was third overall with a gold medal, two silver and a bronze.