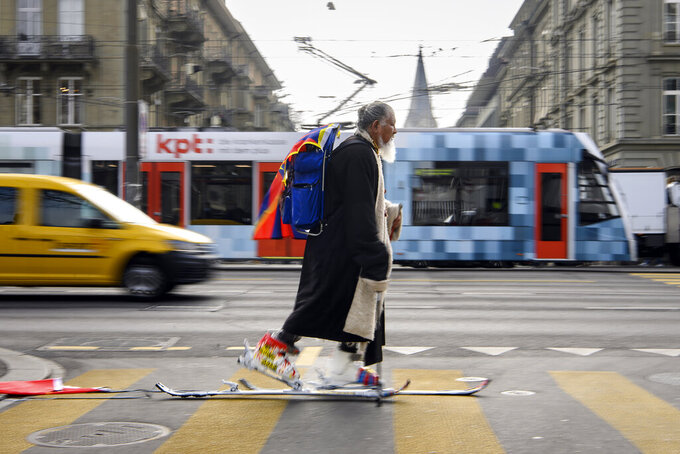 Tibetan musician Loten Namling walks from Bern to the IOC Lausanne with skis and ski boots and a Chinese flag trailing behind him, on Wednesday, 26 January 2022, in Bern, Switzerland, as part of a protest march to protest against the Beijing Winter Games. With the action, Loten Namling wants to draw the attention of athletes in Switzerland to the oppression of Tibetans by the Chinese government. (Anthony Anex/Keystone via AP)

LAUSANNE, Switzerland (AP) — Hundreds of Tibetans marched Thursday outside the Swiss headquarters of the International Olympic Committee, demanding freedom for their region as Beijing prepares to host the Winter Games.

Waving placards bearing messages like “Save Tibet” and “No More Bloody Games,” Tibetan expatriates from across Europe sought to send a message to China’s ruling Communist Party.

Behind a tiny police escort, demonstrators waving scores of Tibetan flags were joined by a handful of men in monk-like robes and about a dozen supporters of China’s Muslim Uyghur minority.