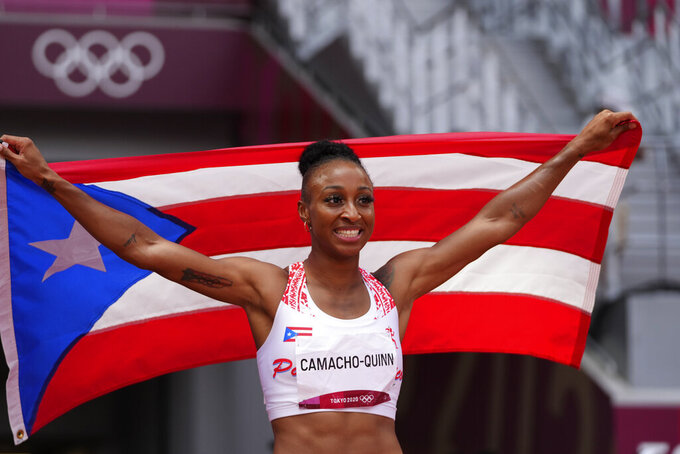 FILE - Jasmine Camacho-Quinn, of Puerto Rico, celebrates after winning the women's 100-meter hurdles final at the 2020 Summer Olympics, Monday, Aug. 2, 2021, in Tokyo. She's already a celebrity in Puerto Rico. Her name appeared on billboards after her win in Tokyo. She had a parade in her honor and met some of the country's biggest names. She appreciated all the attention but now is eager to get back to work of winning more gold medals. (AP Photo/Matthias Schrader, File)

EUGENE, Ore. (AP) — This was what winning an Olympic gold medal for Puerto Rico looked like for hurdler Jasmine Camacho-Quinn: Billboards around San Juan featuring only her first name. A festive, flag-waving parade just for her. Meeting some of the country's biggest dignitaries.

Now, along with all of that, comes pressure — pressure to replicate that 100-meter hurdles gold medal at world championships and beyond.

Despite being the best hurdler all last season, she viewed herself as an underdog in Tokyo, where she captured her nation's first Olympic track and field gold. These days, that sort of role doesn't apply. That medal placed a lot of extra weight on her shoulders, which she's learning to deal with as she begins the first round of the hurdles at worlds on Saturday in Eugene, Oregon.

“The pressure that’s on you, it can stress you out a little bit,” said Camacho-Quinn, who is from South Carolina and chose to represent Puerto Rico as an homage to her mom's heritage. “You’re trying to be perfect at everything. You’re trying to have the same year, or something similar as you did the year before.

“I’m actually handling it a lot better now, so that’s a good thing. I’m not super-nervous going into world championships.”

To think, she was initially mad after crossing the line that day in Tokyo. Mad that she clipped the ninth hurdle. Mad that she didn’t set a world record.

“And then I just had to remind myself that I just won an Olympic gold medal,” Camacho-Quinn said with a laugh. “I snapped out of it."

It was quite a contrast to the 2016 Rio de Janeiro Olympics, where she hit the eighth hurdle in her semifinal heat, stumbled over the ninth and crashed into the 10th. She crossed the finish line, dropped to her knees on the track and buried her head in her hands. The tears flowed.

Out of it, a promise — this wouldn't happen again. She studied that race and what went wrong. Her trail leg was lagging a little bit. She cleaned up her form. She trained even harder.

In Tokyo, she dominated the race and celebrated for a country where her mom is from. Camacho-Quinn was raised in South Carolina, but always had Puerto Rican influences around the house thanks to mom — music, food, celebrations.

And while some may raise eyebrows at her representing the red, white and blue of Puerto Rico while growing up in the U.S. — hardly unheard-of, and completely reasonable given America's deep stable of talent in the hurdles — she knows how much this medal meant to a nation of 3 million people.

“The amount of love I received, that was amazing,” the 25-year-old said. "I just feel like that I just brought joy to everybody.”

She was treated like royalty upon a return to Puerto Rico soon after the Olympics. There were billboards with just " Jasmine ” in white letters set against a red backdrop. There was a parade that passed through the streets and proud Puerto Rican fans waving flags.

She also got to meet Roberto Clemente’s brother, Justino, who requested an audience with her. His house is a museum to his late brother, Roberto, the Hall of Fame outfielder for the Pittsburgh Pirates who died at 38 on Dec. 31, 1972. Justino added something else to his memorabilia collection — a poster of Camacho-Quinn.

In addition, she was at a symposium with baseball standout Carlos Delgado.

“It’s unfathomable the impact she’s made on the Puerto Rican community in the U.S. and of course in Puerto Rico,” her agent, Paul Doyle, said.

To think, she didn’t even start training for the hurdles until eighth grade. She thought her career was on the balance beam as a gymnast, not in a lane on the track.

Really, Camacho-Quinn considers herself a sprinter who happens to compete in the hurdles — just like her dad, James, who was a hurdler at Charleston Southern University (it was Baptist College at Charleston before a name change in 1990). Her mom, Maria, was a sprinter and long jumper at the college, too.

Camacho-Quinn went to school at the University of Kentucky, where she was a three-time NCAA champion. The school also produced one of Camacho-Quinn's top rivals, world-record holder and Olympic silver medalist Keni Harrison of the U.S.

Camacho-Quinn's big brother happens to be Robert Quinn, the Pro Bowl pass rusher with the Chicago Bears. When she won in Tokyo, the team posted his congratulations to his sister on Instagram as he walked off the field. He also did a little leap — like he was clearing a hurdle.

She's certainly on a roll these days, in hurdles and her new sport of bowling. She's already posting scores in the 100s.

“I don’t know how to curve the ball yet, but I’m very interested in learning how to do that,” Camacho-Quinn said. “Because bowling is fun.”

But bowling is not on the Olympic program.

“I’m good with track,” she cracked.