Ibrahimovic to keep playing with AC Milan when he's 40 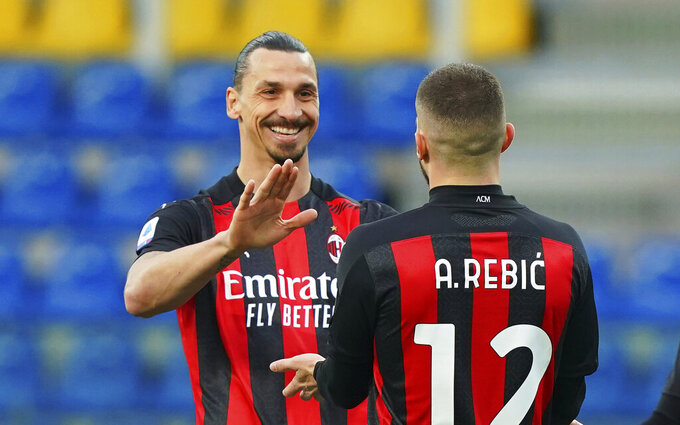 Milan's Ante Rebic celebrates after scoring his side's first goal, with teammate Zlatan Ibrahimovic, who gave him the assist, during the Italian Serie A soccer match between Parma and Milan at the Ennio Tardini stadium in Parma, Italy, Saturday, April 10, 2021. (Spada/LaPresse via AP)

MILAN (AP) — Zlatan Ibrahimovic is going to keep playing with AC Milan when he's 40. And he'll likely make his return to the Champions League.

Milan announced Thursday that Ibrahimovic, who turns 40 on October, had signed a one-year contract extension.

While financial details were not disclosed, Ibrahimovic is expected to maintain the same salary of 7 million euros ($8.4 million) per season.

Ibrahimovic’s return at the start of last year signaled a turnaround for Milan that saw the Rossoneri leading Serie A for much of this season. Milan is currently in second and still in the Champions League places.

Milan, a seven-time European champion, has not played in the Champions League since the 2013-14 season.

Ibrahimovic has scored 15 goals in 17 Serie A games for Milan this season. However, he has also missed many games through injury, the coronavirus and suspension.