Iličić leads Atalanta to 2-0 win over Liverpool in CL 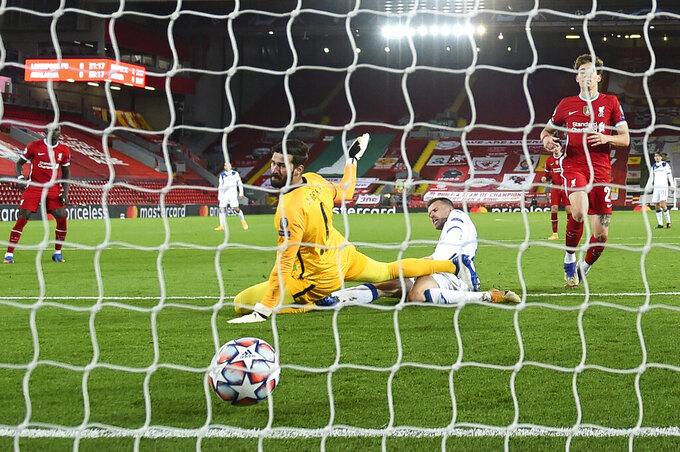 LIVERPOOL, England (AP) — Eight months after his spectacular four-goal show in last season’s round of 16, Josip Iličić was back on the scoresheet in the Champions League for Atalanta and leading the Italian upstart to another memorable win in the competition.

Atalanta consigned Liverpool to a rare loss at Anfield on Wednesday, beating the six-time European champions 2-0 to revive its hopes of qualifying for the knockout stage for the second straight season.

Iličić set the visitors on their way to victory with a 60th-minute strike that was the Slovenia international’s first goal for Atalanta since March, when he netted four times in a 4-3 win at Valencia to secure his team a place in the quarterfinals against all the odds.

Since then, Iličić contracted the coronavirus during lockdown and reportedly became depressed, meaning he missed the rest of the season — including Atalanta’s loss to Paris Saint-Germain in the Champions League’s last eight — when soccer resumed in June.

He only started playing again for the first team last month, and showed his joy at getting back among the goals against Liverpool by letting out a roar and clenching his fists inside an empty Anfield.

Robin Gosens added a second goal in the 64th minute and Atalanta held on surprisingly comfortably to gain a measure of revenge for its 5-0 thrashing by Liverpool in the first match of their double-header three weeks ago.

Needing a win to secure progress to the last 16, Liverpool’s players were strangely out of sorts. They didn’t manage a shot on target despite having star forward Mohamed Salah back in the team after recovering from contracting the coronavirus, while their injury problems in defense caught up with them.

It was only Liverpool’s fourth loss at home in all competitions since the start of the 2017-18 season, which includes the extra-time defeat to Atletico Madrid in the Champions League’s round of 16 last season.

Both of the goals came from deliveries from Atalanta’s left, with Iličić sliding in at far post to turn the ball home from Alejandro Gomez’s cross.

From another cross to the back post, Hans Hateboer headed the ball back into the middle for Gosens, Atalanta’s other wing back, to sidefoot in from eight meters.

Depleted amid injuries to center backs Virgil van Dijk and Joe Gomez as well as to right back Trent Alexander-Arnold, Liverpool also chose to rest regular left back Andrew Robertson and its makeshift defense -- featuring youngsters Neco Williams and Rhys Williams -- looked exactly that at times.

Klopp looked frustrated after the final whistle, especially since he has to pick his players for another match in less than three days — at Brighton in the Premier League.