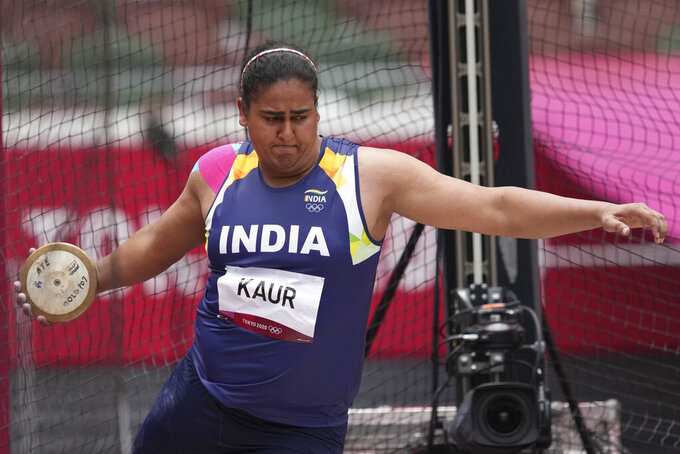 FILE - Kamalpreet Kaur, of India, competes during the qualification round of the women's discus throw at the 2020 Summer Olympics, on July 31, 2021, in Tokyo. Indian discus thrower Kamalpreet Kaur has tested positive test for an anabolic steroid. The case was announced Wednesday nine months after she placed sixth at the Tokyo Olympics. Kaur tested positive for stanozolol in a case the agency dated to March 29. (AP Photo/Matthias Schrader)

The AIU said Kaur has been provisionally suspended while the doping case is investigated.

Kaur tested positive for stanozolol — the steroid most famously used by sprinter Ben Johnson at the 1988 Seoul Olympics — in a case the AIU dated to March 29.

The 26-year-old athlete placed sixth in Tokyo last August, less than two meters out of the medals in a competition won by Valarie Allman of the United States.

Kaur had set an India women’s record of 66.59 meters competing in her home country several weeks before the Olympics.

Her Olympic result likely will not be affected by the doping case.