IndyCar courts Black fans, drivers in its push to diversify 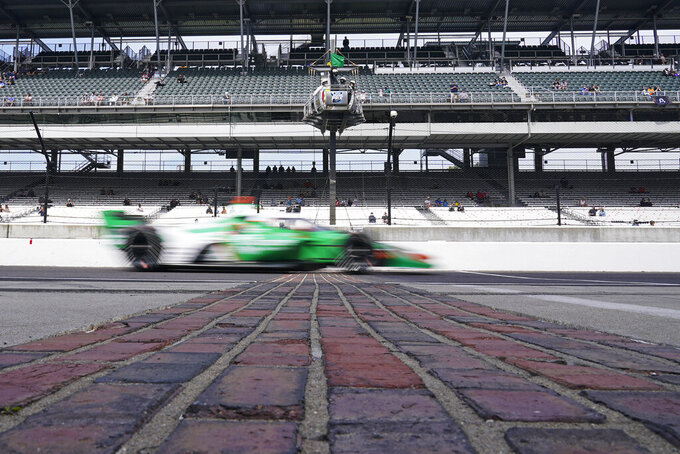 James Hinchcliffe, of Canada, drives down pit lane during a warm-up session for the IndyCar auto race at Indianapolis Motor Speedway, Saturday, May 15, 2021, in Indianapolis. (AP Photo/Darron Cummings)

INDIANAPOLIS (AP) — Rod Reid ran a program full of young, Black kart racers locked out of a venue because of the pandemic and needed a track to race.

Indianapolis Motor Speedway had spent millions on upgrades on the historic property at the same time last year when the coronavirus had a steely grip on the nation. There was no guarantee -- even if gates were open -- that there would be room for NXG Youth Motorsports ’ usual spot teaching kids STEM classes in a makeshift classroom in the paddock or for their drivers to race around the cone-lined course in a parking lot.

The suggestion was made to Reid: Why not dial up the new boss at IMS?

His plea for help last June to Roger Penske -- Reid noted the 2,300 kids from 11 to 15 years old who have passed through the school over 15 years looking for a path into motorsports -- turned instead into a startling revelation for the Captain.

Yes, the NXG kids needed a place to learn and hone their craft. But the blossoming drivers also represented a rare chance for a minority group severely underrepresented in racing to feel at home inside the sprawling, 111-year-old speedway.

“We told him what we were about and he was really surprised,” Reid said. “The reason we started, especially the idea of exposing the Black community to Indianapolis Motor Speedway, surprised him because he said he couldn’t believe people don’t feel welcome here. I told him, you’re talking years and years and years back to when a person of color couldn’t even go to the speedway.”

The 84-year-old Penske offered NXG space at IMS to resume the program and, essentially, a new start. He helped NXG start a working relationship with Chevrolet, and the program secured loans to purchase a truck for its trailer. The talks with Penske happened to come not long after the death of George Floyd, a catalyst that in part led to IndyCar's “Race for Equality and Change” initiative supporting diversity and inclusivity across the industry.

IndyCar moved to create a more diverse workforce throughout all levels of a series that has had just two Black drivers race in the Indy 500, its showcase annual event that dates to 1911. Willy T. Ribbs became the first Black driver to start the race in 1991 (and again in 1993) and George Mack in 2002 are it.

The 66-year-old Ribbs said he never cared much for his role as Indy 500 trailblazer.

“I didn’t care about it,” he said. “Still don’t. It meant nothing. I was focused on going fast and trying to win. If you focused on anything other than that when you were there, you were going to get hurt or get killed.”

Programs launched over the last several months are designed to reach far beyond the cockpit, but an anchor of IndyCar’s plan was the creation of Force Indy, an all-Black race team led by Reid that competes in the IndyCar ladder USF2000 Series. Force Indy hired and developed Black mechanics, engineers and drivers throughout its entire team. Myles Rowe, who turns 21 in June, drives for the team and has been pegged as a potential Indy 500 driver.

Jimmie McMillian, chief diversity officer for Penske Entertainment, is the architect intent on designing a new era in the open wheel series.

“We want to make sure our paddock represents the fan base that we hope to have,” McMillian said. “My No. 1 goal, I feel every day, is to get rid of the concept that this is a white sport and that people are not welcome here.”

Years before Penske assumed stewardship of the series, IndyCar had a diversity committee that worked on recruitment and retainment for both the series and IMS. While McMillian viewed the number of women involved on the corporate side as a positive for the series -- roughly 35% to 40% of the workforce are women -- the minority makeup “was where we probably struggled.”

IndyCar’s solution was an attempt to become more aggressive and creative in its outreach efforts -- how does it find the best and brightest in urban communities and persuade them to seek a career inside the paddock.

With few exceptions for drivers born into legacy families, pursuing a career in racing is as much about sponsorship, cash and connections as talent, and the hustle is part of the job. IndyCar took a deeper look at identifying businesses willing to support developmental teams or help in securing equipment for up-and-coming programs.

That also means developing a career path in racing for women and minorities in a variety of jobs outside the cockpit ranging from race engineers to public relations and sponsorship selling and beyond.

“Someone has to take that first step,” Penske said. “I think in the position we’re in, we can be leaders in that area. We’re going to continue to do it. We’re looking at the people we do business with. The people that we hire. We have a much deeper focus. We have that within our company. But I think from a racing perspective, I think we have that responsibility.”

IndyCar created incentives for teams and track promoters that pushed diversity efforts. NXG students will race karts in Detroit as part of a pilot program that could lead to a full-season schedule in 2022 and expansion of the program is planned across the country.

NXG, funded in part through Lucas Oil sponsorship, has yet to send a student to IndyCar, though there may be no better time for kids to feel like they can succeed in some capacity at IMS.

Look around IMS and tangible culture change is happening now. USF2000, the first rung on the road to IndyCar, raced at IMS during the IndyCar Grand Prix weekend ,and more Black fans seemed to visit the track and watch the race than McMillian could remember.

“They said, ‘I didn’t know so many Black people came to races,’” he said. “The narrative now is: there are a lot of Black people here. We have to make sure all the folks in our community, for one reason or another can say, ‘I’ve been to the track.’”