Infantino says biennial WCups can bring youth back to soccer 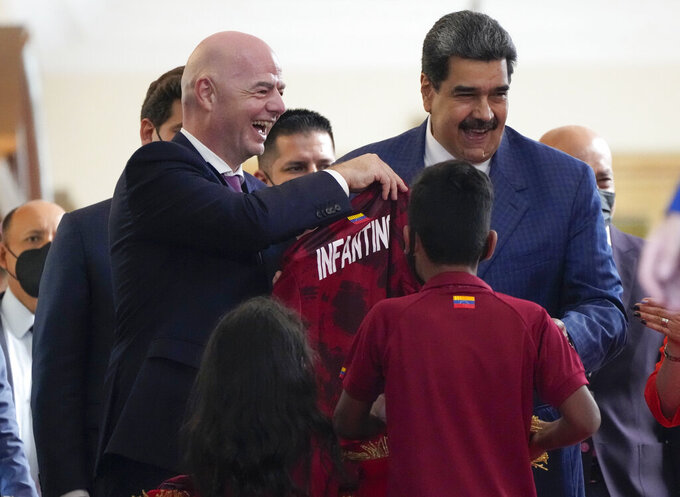 FIFA President Gianni Infantino told European football leaders that his governing body was not the "enemy of football" while saying biennial World Cups were needed to keep youngsters interested in the sport at a time when they are increasingly “running after” other activities.

The Associated Press obtained a recording of Infantino speaking Tuesday during a meeting that was closed to the media, where UEFA member associations also voiced a stream of opposition to his plans to double the frequency of World Cups.

Infantino was challenged by presidents of national federations on the damage that would be caused to not only club competitions but also national teams if FIFA radically overhauls the international game despite European opposition.

But Infantino pitched the reshaping of world football as being necessary to safeguard the future of the sport.

“I believe as well that the enemy of football is not the World Cup or is not FIFA but it is other activities that young boys and young girls are running after today,” Infantino said in closing remarks to the meeting that lasted more than an hour. “And we need to see how jointly and together we can bring them back to be interested in football. And we want to, as far as I’m concerned, do this all together as we have always been doing in the last few years.”

Infantino did not specify what those “other activities” were. He did not respond to a phone call from the AP seeking comment and FIFA had no immediate comment expanding on the remarks ahead of a council meeting on Wednesday.

Keeping younger viewers interested in watching 90-minute matches has increasingly become a challenge, especially given the rise of gaming. Infantino's comments come amid a dispute with EA Sports, the maker of the FIFA video game, over the future of the product but FIFA itself still embraces e-sports.

The International Olympic Committee also at the weekend denounced FIFA's attempt to remodel the calendar which could result in having a men's or women's World Cup every year. The IOC has started to embrace sports seen as more appealing to youngsters, with skateboarding debuting at the recent Tokyo Olympics and the the 2024 Paris Games introducing the break dance sport.

FIFA's plans could have a significant impact on the Olympics where the women's football competition features no age restrictions unlike the men's event.

“I believe we can still find ways to develop football further,” Infantino told the meeting with UEFA. “The World Cup is huge. It’s a big, big competition that everyone benefits from the World Cup and that we need to be very careful on what we do with the World Cup.”

The Associated Press reported on Tuesday that more than a dozen European nations told UEFA they would consider quitting FIFA over biennial World Cups.

“I’m seriously seriously asking you and FIFA not to push for a vote because that could have terrible consequences for football,” UEFA President Aleksander Ceferin told Infantino on the call.

“I don’t think it would be wise to go for a vote on a matter like that. Not just because there will be severe consequences that we will have to take but also because the stakeholders like clubs and leagues don’t have a voting right and this idea is detrimental to their existence.”

Leaders from the Finnish, Italian, Germany, Portuguese, Romanian, Scottish, Spanish and Swiss federations told Infantino they want to continue having the World Cup every four years.

They cited the impact on player welfare of having more frequent tournaments, the pitfalls of having only one block of qualifiers across October and November, and the potential damage caused to the growing profile of the women's game by having more men's competitions.

“We will not go ahead as far as I’m concerned with any proposal if anyone was to be harmed," Infantino told the virtual meeting with UEFA.

But Infantino also said it wasn't only the views of UEFA, which features 55 member associations, that counted. Infantino has been pushing to secure approval in December for holding World Cups every two years.

“We cannot just shape new proposals based on feedback from from Europe,” he said. “We have to respect the opinions of everyone.”

Tiago Craveiro, the general secretary of the Portuguese federation, proposed that FIFA explores the possibility of not allowing teams to compete in consecutive editions if it pushed ahead with biennial World Cups.

“I welcome as well the idea of Thiago to say, well, we need more participation and maybe there is a way of doing that by having two World Cups, but not with the same teams participating,” Infantino said. “I don’t know. This is something that the technical people will study, but this is certainly something that we have to look into."

At one point Ceferin pushed Infantino to answer specific questions directed at him.

No country spoke in favor of the plans during the call with Infantino, who was general secretary of UEFA before being elected FIFA president in 2016 in the fallout from the scandals that led to Sepp Blatter and his expected successor Michel Platini being banned from the sport.

“We trusted you to create an organization that transcends the divisions and brings unity," Răzvan Burleanu, a Romanian member of the FIFA Council, said to Infantino.