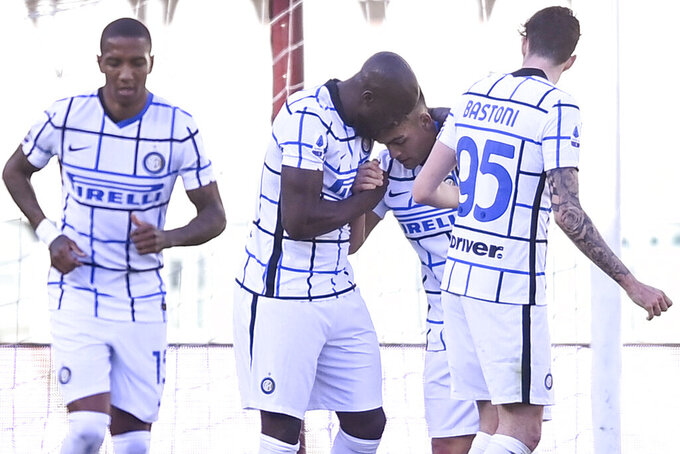 Inter's Romelu Lukako, secondd from left, celebrates after scoring his side's first goal on a penalty kick during the Italian Serie A soccer match between Torino and Inter Milan at the Olimpico Grande Torino stadium in Turin, Italy, Sunday, March 14, 2021. (Fabio Ferrari/LaPresse via AP)

MILAN (AP) — Inter Milan’s match against Sassuolo on Saturday has been postponed because of a rising number of coronavirus cases and the team’s players have been banned from traveling for international duty, the Italian club said Thursday.

Inter said the local health authority in Milan decided to suspend any team activities for four days, including postponing the match against Sassuolo. The club also said all players have been "prohibited from fulfilling any call-ups to their respective national teams.”

Inter said the entire team would be tested again on Monday.

Players are due to join up with their national teams after the weekend’s games for the start of World Cup qualifying.

Inter Milan is bidding for its first Serie A title in more than a decade. The team coached by Antonio Conte has a nine-point lead over second-place AC Milan.