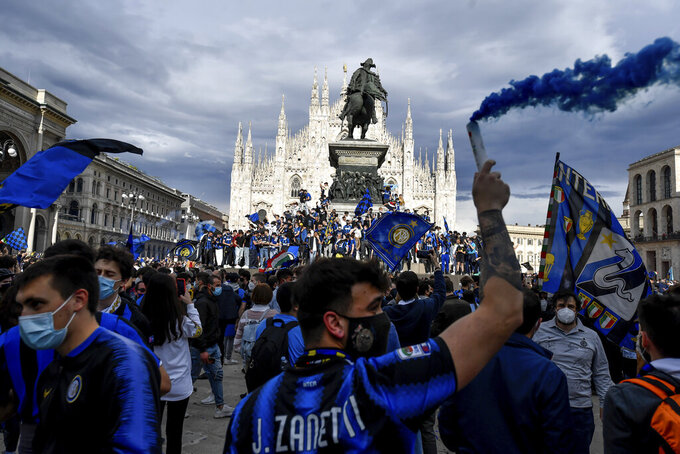 Inter Milan fans celebrate with flares and shout slogans in Piazza Duomo square in front of the gothic cathedral after Inter Milan won its first Serie A title in more than a decade after second-placed Atalanta drew 1-1 at Sassuolo, in Milan, Italy, Sunday, May 2, 2021. Atalanta needed to win to avoid Inter mathematically clinching the title with four matches remaining. It was Inter’s first trophy since 2011 and the first Serie A title since 2010. (Claudio Furlan/LaPresse via AP)

MILAN (AP) — The city of Milan erupted into a cacophony of celebrations on Sunday as Inter Milan won its first Serie A title in more than a decade.

Car horns began blaring immediately after second-place Atalanta drew 1-1 at Sassuolo. That confirmed Inter as champion — with an insurmountable 13-point lead with four matches to spare — and fans descended on the main square in front of the city's famous cathedral.

Thousands of Nerazzurri fans congregated in Piazza Duomo, with flags and scarves, chanting and singing as they jumped and clapped with little heed to coronavirus restrictions. Almost all wore masks but many were pulled down below their chins.

They also set off flares and fireworks.

It was Inter’s first trophy since 2011 and the first Serie A title since 2010, when it claimed the treble of the league, Champions League and Italian Cup.

“We are, yes, we are. Champions of Italy. We can finally scream it, after dreaming of it, after keeping it hidden in the depths of our hearts, after holding on to it like a precious dream that we did not want to waste,” read a lengthy statement on the Inter website.

Inter ended Juventus’ grip on the league crown. Inter coach Antonio Conte led Juventus to the first three of its nine successive Serie A titles but ended that run in his second season in charge of the Nerazzurri.

“This is certainly one of the most important successes in my career,” said Conte, who also won the English Premier League with Chelsea in 2017. “It wasn’t an easy decision to come to Inter, right at the time where the team wasn’t equipped to win something.

“Moreover the opponent was Juventus, for which I worked for so long and it had dominated for nine years. I accepted the challenge with great willingness ... today we can say that our sacrifices have been repaid.”

Juventus was one of the first teams to congratulate its bitter rival on social media while Bianconeri president Andrea Agnelli also posted a message of congratulations to Inter counterpart Steven Zhang.

“Well done Steven! Happy for you and proud of being your loyal opponent on the pitch and friend off the pitch,” Agnelli wrote on Twitter.

Inter became the first foreign-owned team to win Serie A. Funding from Chinese group Suning put Inter on its way to recovery after a 2016 takeover but the title win comes during a difficult period for the retail giant, which has been hit hard by the coronavirus pandemic.

Suning has been looking for investors rather than trying to offload the Serie A club, and Italian media reports it is in advanced talks with Bain Capital over a loan deal worth 270 million euros ($325 million).

After Inter won 2-0 at Crotone on Saturday, Atalanta was the only team that could possibly catch Conte’s side and needed to win to do so.

But its chances diminished dramatically when a moment of madness from goalkeeper Pierluigi Gollini saw him race out of his area and knock over Sassuolo midfielder Jérémie Boga, earning himself a straight red card in the 23rd minute and leaving his side with 10 men for most of the match.

Robin Gosens scored for Atalanta nine minutes later but Domenico Berardi leveled from the penalty spot early in the second half after Rafael Tolói was adjudged to have pushed over Hamed Junior Traorè.

Sassuolo also gave away a penalty and had a man sent off late on when defender Marlon was shown a second yellow card for a foul on Luis Muriel. But former Atalanta goalkeeper Andrea Consigli saved Muriel’s spot kick.

Both sides also had goals ruled out for offside.

Two late goals from Cristiano Ronaldo saw Juventus fight back to win 2-1 at Udinese and boost its chances of qualifying for the Champions League.

After Inter’s title win it appeared as if Juve’s fall from grace would be further emphasized as Udinese led for most of the match following Nahuel Molina’s 10th-minute goal.

But Ronaldo leveled from the spot seven minutes from time after Rodrigo De Paul was penalized for handball, and the Juventus forward headed in the winner six minutes later.

Juventus moved level on points with second-place Atalanta and AC Milan. Fifth-place Napoli is two points further back after it was held to a 1-1 draw by Cagliari following a stoppage-time equalizer from the Sardinian side.

The top four from Serie A qualify for the Champions League and Lazio is only five points off the pace and with a game in hand after beating Genoa 4-3.

Bologna forward Rodrigo Palacio became the oldest player to score a Serie A hat trick, aged 39 years, 86 days, to help his side draw 3-3 against Fiorentina. Edin Džeko had a penalty saved and two goals ruled out for offside as Roma lost 2-0 at Sampdoria.