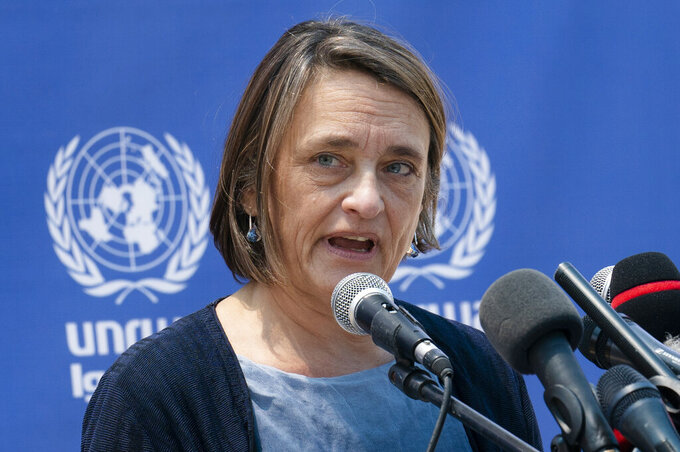 Lynn Hastings, of Canada, United Nations Deputy Special Coordinator for the Middle East Peace Process and Resident Coordinator and Humanitarian Coordinator for the Occupied Palestinian Territory speaks during a news conference at their compound following a cease-fire reached after an 11-day war between Gaza's Hamas rulers and Israel, Sunday, May 23, 2021, in Gaza City. (AP Photo/John Minchillo)

JERUSALEM (AP) — Israeli police escorted more than 250 Jewish visitors Sunday to a flashpoint holy site in Jerusalem where clashes between police and Palestinian protesters helped trigger a war in Gaza, according to the Islamic authority overseeing the site.

The 11-day conflict between Israel and Gaza’s militant Hamas rulers came to a fragile halt Friday, but left behind immense ruin in Gaza, including hundreds of homes in that have been completely destroyed and many more that were badly damaged, according to the U.N.

With tensions still high, police cleared young Palestinians out of the Al-Aqsa Mosque compound and barred entry to Muslims under the age of 45, according to the Islamic Waqf, which oversees the site. Muslims who entered were required to leave their IDs with police at the entrance. It said six Palestinians were detained, with four later released.

Israeli police denied there was any age restriction and said they arrested five people who “violated the public order.” Police spokesman Micky Rosenfeld said the site was open for “regular visits” and that police had secured the area.

The visits later ended without any further incident.

Israeli police had briefly clashed with Palestinian protesters after Friday prayers in an early test for the truce, which had taken effect hours earlier. The cease-fire in Gaza has held, but violence in Jerusalem could set off another cycle of escalation.

The Waqf said Sunday was the first time Jews had been allowed to visit the site since May 4, a week before the war broke out.

The Al-Aqsa Mosque is the third holiest site in Islam. It sits on a sprawling hilltop in Jerusalem’s Old City that is revered by Jews as their holiest site because it was the location of the biblical temples. The site has often been the scene of Israeli-Palestinian violence over the years and was the epicenter of the 2000 Palestinian intifada, or uprising.

Israeli police repeatedly clashed with Palestinian protesters at the site in the days leading up to May 10, when Hamas fired long-range rockets at Jerusalem, saying they were protecting the city in the wake of the skirmishes. The threatened eviction of dozens of Palestinian families from a nearby neighborhood was cited as another major trigger of the war.

In recent years, increasing numbers of religious and nationalist Jews have visited the site. Palestinians fear Israel plans to eventually take over the compound or partition it. The Israeli government has repeatedly said it has no intention of changing the status quo, in which the Waqf oversees the site under Jordanian custodianship.

On Sunday, Jordan said it would pay for repairs to Jerusalem’s Al-Aqsa Mosque, as well as medical aid for Palestinians, including a coronavirus testing and vaccination center in the Gaza Strip. The statement from the Royal Court did not specify the amount of funding.

The recent war saw Israel unleash hundreds of airstrikes across Gaza at what it said were militant targets. Hamas and other armed groups fired more than 4,000 rockets toward Israel, most of which were intercepted or landed in open areas. At least 248 Palestinians were killed, as were 12 people in Israel.

U.S. Secretary of State Antony Blinken leaves this week for the Mideast. He told ABC News’ “This Week with George Stephanopoulos” on Sunday that the cease-fire offers a chance to “make a pivot to building something more positive.”

Blinken said the priorities include addressing the immediate humanitarian situation in Gaza, reconstructing what was lost in the violence and “engaging both sides in trying to start to make real improvements in the lives of people so that Israelis and Palestinians can live with equal measures of security, of peace and of dignity.”

The Israeli strikes leveled a number of large buildings in the impoverished coastal territory, which is home to more than 2 million Palestinians, which has been under a crippling Israeli-Egyptian blockade since Hamas, an Islamic militant group, seized power from forces loyal to the internationally backed Palestinian Authority in 2007.

Lynn Hastings, the U.N. humanitarian coordinator for the Palestinian territories, said some 300 buildings in Gaza — including an estimated 1,000 homes — had been completely destroyed. She said hundreds more had been heavily damaged. She cautioned that those were “very, very preliminary numbers” as the damage is still being assessed.

Hastings said a total of six hospitals and 11 primary health care centers were damaged, and that one hospital was not functioning because of a lack of electricity. She said around 800,000 people lack access to tap water and 400,000 people do not have proper sewage treatment because of damage to local infrastructure.

Israel says it made every effort to avoid harming civilians and only targeted militant infrastructure, including a vast tunnel network and rocket launchers. It blames the war and its devastation on Hamas.

Mark Regev, an adviser to Israeli Prime Minister Benjamin Netanyahu, told “Fox News Sunday” that Israel had dealt Hamas a “heavy blow” and hoped it would serve as a deterrent. But he also expressed hope that the truce could last, noting “over half a decade of relative peace and quiet” after the last round of fighting in 2014.

On Sunday morning, hundreds of municipal workers and volunteers started a one-week campaign to clear rubble from Gaza’s streets. The work began outside a high-rise building that was flattened by Israeli warplanes during the early days of airstrikes on Gaza, with workers loading rubble into donkey carts and small pickup trucks.

The International Committee of the Red Cross said Friday that the war may have left hundreds of unexploded munitions, which could cause further casualties and hinder efforts to rebuild.