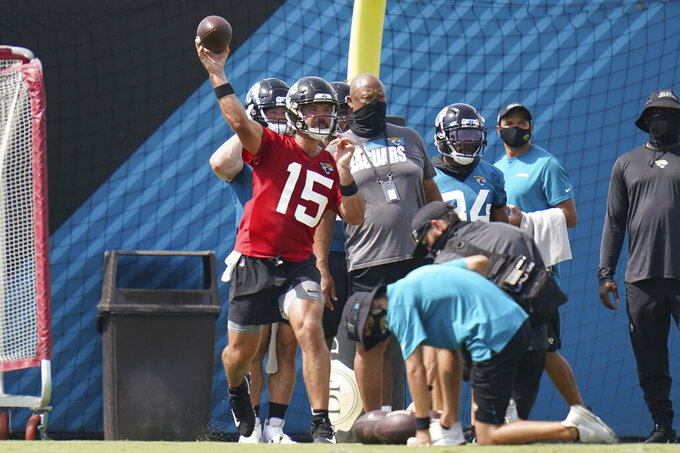 JACKSONVILLE, Fla. (AP) — Looking to revitalize one of the NFL’s most inept offenses, the Jacksonville Jaguars turned to the NFC East for the second consecutive year.

Together, they have been tasked with helping Gardner Minshew and one of the league’s youngest offenses take huge strides after missing months of on-field work during the offseason because of the coronavirus pandemic.

“I would’ve taken a job coaching a monkey how to do hopscotch if I had to,” said McAdoo, who was out of the league the past two years and living about an hour south of Jacksonville when Marrone called. “I just wanted to get back in.”

McAdoo initially interviewed for the OC job, but ended up in charge of Minshew. It seems as if it's a good fit: McAdoo’s comedic style meshing with Minshew’s fun-loving, laid-back attitude. Throw in Gruden, and Minshew insists the meeting room is filled with laughter and creativity.

“We’ve got freaking mad scientists in there,” Minshew said. “It gets pretty fun.”

Minshew flashed at times, finishing 6-6 in 12 starts after replacing Nick Foles in the opener. He threw for 3,271 yards, with 21 touchdowns and six interceptions. Sacks (33), fumbles (13) and red-zone struggles were his biggest issues.

Foles, meanwhile, flopped. Philadelphia’s Super Bowl 52 MVP signed a four-year deal that included more than $50 million guaranteed in 2019 — another NFC East product — but he broke his left collarbone on his first series and was benched three games into his return.

The Jaguars could have addressed QB in the draft and probably would have had owner Shad Khan fired Marrone and general manager Dave Caldwell after a second straight last-place finish in the AFC South. But all three felt Minshew deserved a chance to see what he can do with a better scheme and more weapons.

Gruden and McAdoo, who had their most success as NFL coordinators, will try to get everyone in sync. Minshew is the centerpiece.

“He’s got a huge upside and we’re excited to tap into that,” Gruden said.

Here are some other things to know about Jacksonville heading into the season:

Jacksonville could be without as many as nine defensive linemen who opened training camp on its roster, a rash of setbacks to the same position group.

Lerentee McCray and Al Woods opted out because of COVID-19 concerns. Dontavius Russell and Brian Price landed on injured reserve. The most significant blow came when Rodney Gunter was forced to give up football because of an enlarged aorta. Aaron Lynch followed him into retirement the next day for personal reasons.

Josh Mauro (five games) and Carl Davis (four) are suspended to start the season. And it’s unclear whether disgruntled pass-rusher Yannick Ngakoue will show up in time for the opener. Ngakoue is the NFL’s only franchise-tagged player not under contract. His one-year tender offer is worth $17.8 million.

“You know, it’s easy to point a finger, but that’s not who we are,” defensive line coach Jason Rebrovich said.

The team now has just four players over the age of 30.

“You hear what people are saying against you, but at the end of the day you know what you can do and you know what the guys around you can do,” Minshew said. “We are going to focus on the things we can do and not what we can’t do. If we do that, if we focus on ourselves, we’ll have a chance to be pretty damn good.”

At one time in camp, the Jaguars led the league with players on the COVID-19 list. They had 12 in early August, including Minshew. The only one on the list now is offensive lineman Ryan Pope.