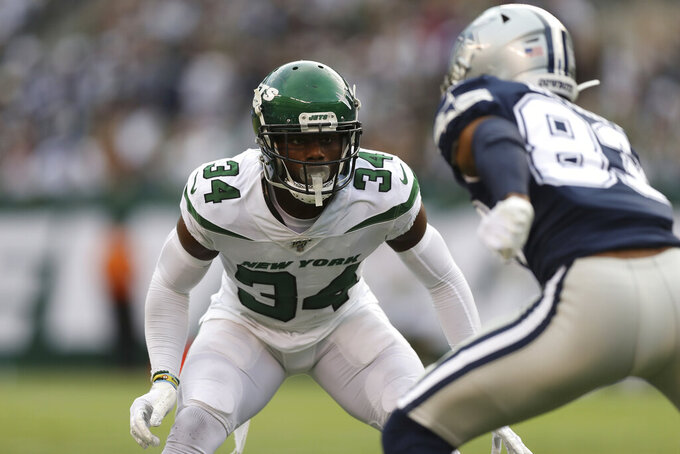 FILE - New York Jets cornerback Brian Poole (34) covers Dallas Cowboys wide receiver Ventell Bryant (83) during the first half of an NFL football game, Sunday, Oct. 13, 2019, in East Rutherford, N.J. Poole was severely dehydrated, worsened by what he said was an undisclosed underlying medical condition. He ended up needing to go to the hospital to be monitored a few hours — and missed the next 2 1/2 weeks of practice as the Jets eased him back to the field. He participated in team drills Tuesday, Sept. 1, 2020, for the first time since dealing with the dehydration issues.(AP Photo/Steve Luciano, File)

FLORHAM PARK, N.J. (AP) — Adam Gase knew something was a bit off as soon as he looked at Brian Poole.

The New York Jets had just finished their first training camp practice on Aug. 14 and the cornerback was sweating profusely.

“I just remember looking over and seeing him soaked,” Gase recalled Tuesday, “and I was thinking, ‘Wow, that was unusual for the first day.’”

It certainly was. And there was an alarming reason for it.

Poole was severely dehydrated, worsened by what he said was an undisclosed underlying medical condition. He ended up needing to go to the hospital to be monitored a few hours — and missed the next 2 1/2 weeks of practice as the Jets eased him back to the field. He participated in team drills Tuesday for the first time since dealing with the dehydration issues.

“Oh, man, I'm feeling a lot better,” Poole said. “It felt really good to get back on the grass with my teammates and kind of get back out there.”

The 27-year-old Poole declined to go into too many details about his health situation, but acknowledged that it was “kind of scary” to experience.

“Really, I was just dehydrated and caught a couple of cramps,” he said. “It was just a lot of precautionary reasons that they kept me out a couple of extra days, but I'm ready to go now.”

Poole acknowledged that he deals with dehydration issues at the beginning of every training camp that “kind of makes it tough on me.” But, he has learned to mostly manage his situation and get back on the field quickly — as he did last summer.

This time, though, his body's reaction was something he wasn't used to.

“I mean, I had pretty bad cramps and everything,” Poole said. “That kind of made it extreme.”

Poole had been progressing over the past several days, going from not even being outside during practice to rejoining his teammates on the sideline before finally actually taking the field. He had been urging Gase and the training staff to let him practice, eager to get himself ready for the regular season.

“I think our training room did a good job of making sure we’re checking all the boxes and we didn’t rush anything, even though he wanted to get out there,” Gase said. “But to see him be able to get out there and the excitement he had, he looked like a guy that was his first day playing football. He was jacked up.”

The Jets have Poole on a snap count for now, and the cornerback participated in individual drills, some team drills and special teams.

“It was great to see him out there and he looked good working,” Gase said. “Even after practice, his jersey wasn’t a different color of green as everybody else’s.”

Poole is an important piece of Gregg Williams' defense, working as a starter as New York's nickelback. After three seasons in Atlanta, Poole signed a one-year deal with the Jets worth $3.5 million in 2019. He finished with 62 tackles, an interception he returned 15 yards for a touchdown, six passes defensed, a forced fumble and five quarterback hits.

New York kept Poole in the mix for this season, re-signing him to a one-year, $5 million contract in March. Now that he's healthy again and has his dehydration issues under control, he's looking to be an even more disruptive force in the Jets' defense.

NOTES: The Jets re-signed RB Pete Guerriero after cutting him last week. They also waived DL Sterling Johnson and LB B.J. Bello. ... Rookie RB La'Mical Perine has a low-ankle sprain, according to Gase. The fourth-round draft pick was injured Sunday during the team's practice at MetLife Stadium and appeared it might be serious as he was carted to the locker room. “I feel like we got lucky there,” Gase said. “Hopefully we’ll get him back a lot sooner than the way that play looked.” ... RG Greg Van Roten (oblique), S Matthias Farley (hamstring) and RB Josh Adams (hamstring) returned to practice. ... WRs Jamison Crowder, Chris Hogan and Braxton Berrios, and TE Chris Herndon all left practice with what Gase said was “tightness.” Herndon's issue was to his chest area. The moves were precautionary. Crowder later said, “I'll be good.” ... Rookie OL Cameron Clark left with dehydration. ... Gase said LB Patrick Onwuasor will be sidelined another four of five weeks with a knee injury he suffered on Aug. 22. ... OL Chuma Edoga was out with an illness that isn't related to COVID-19. ... Gase said CB Pierre Desir could return in a few days from a hamstring injury that has kept him out most of camp. ... S Marcus Maye (calf), WR Breshad Perriman (knee), WR Denzel Mims (hamstring), WR Jeff Smith (shoulder), WR Lawrence Cager (knee), LB Tarell Basham (ankle) and DL Jabari Zuniga (quadriceps) all remain sidelined.