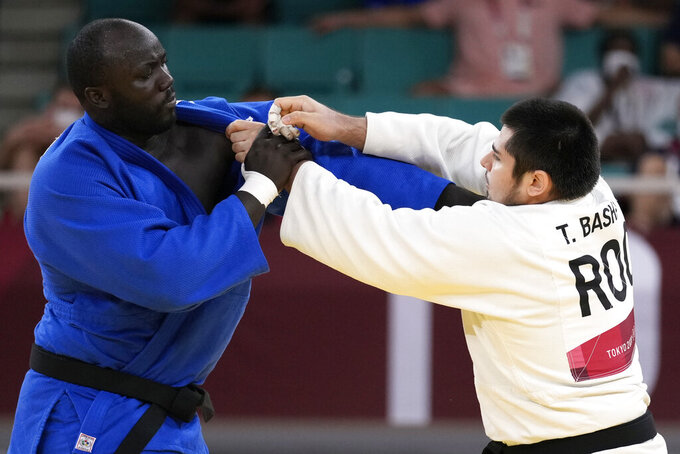 TOKYO (AP) — Although Teddy Riner has already summited almost every peak in judo during his incredible career, the 10-time world champion heavyweight from France spent the past half-decade working for a chance to match Olympic history with three consecutive gold medals.

In one disappointing moment on the tatami in Tokyo, Riner's chance was gone. He slipped, top-ranked Russian Tamerlan Bashaev pounced, and Riner was beaten in the quarterfinals.

After gathering himself and rallying for a bronze medal, Riner met his disappointment with positivity and excitement about the future — particularly with the Olympics coming home to Paris in only three years.

Riner's quest for a record-tying third straight gold ended Friday with a strange loss to Bashaev in golden score. Riner persevered in the evening to win his fourth consecutive medal with two more victories, adding a second bronze to the bronze he won in Beijing 13 years ago.

“I'm very proud to have a fourth medal,” Riner said. “I think everybody knows the Olympic Games is difficult for everyone. I'm not disappointed. I'm very happy with the journey I went on.”

Physically intimidating and charismatically competitive, Riner was the most dominant judo player of the past decade. He went 10 years between defeats while racking up annual world championships against opponents unable to deal with his size and athleticism.

But the 32-year-old finally became more touchable in recent years, and his 152-bout winning streak ended in February 2020 with a loss to Kokoro Kageura of Japan in Paris. Later in the year, he lost again in the French team trials — and he also recently revealed he had injured his knee five months ago.

“It has been difficult, but the Olympics is the dream of all sportsmen,” Riner said. “When you arrive, it's just amazing. This is the reason to work every day, every minute.”

Riner actually came into Tokyo unseeded because of his recent inactivity, but he quickly picked up two impressive wins to reach the quarterfinals.

The 6-foot-8 Riner then lost to Bashaev 29 seconds into golden score when he fell onto his back as he attempted to throw his 5-foot-9 opponent, who was given credit for a waza ari on a sumi-otoshi throw after video review.

Riner appeared to be confused by the decision, but he had put himself in a vulnerable position that allowed Bashaev to win simply by shoving forward and falling. The veteran Riner's mistake might be chalked up to two years of relative inactivity for the most accomplished judoka of his generation, although he refused to use an excuse.

The loss ended Riner’s attempt to tie the Olympic record of three straight gold medals set by Tadahiro Nomura of Japan from 1996 to 2004. Riner said he had spoken to Nomura repeatedly about the pressure of a threepeat.

After his loss, Riner still had the opportunity to compete for bronze through repechage in the evening session at the Budokan — and he didn't waste it.

He put on a superb performance against Rafael Silva of Brazil, finishing his two-time Olympic medalist opponent with an armbar in only 46 seconds to earn a berth in the bronze medal bout.

Riner then took out Hisayoshi Harasawa of Japan in golden score when Harasawa received his third penalty. Riner also beat Harasawa in the Rio de Janeiro final five years ago.

Bashaev couldn't capitalize on his victory over Riner: He lost an incredible semifinal bout to Lukáš Krpálek of the Czech Republic, who went on to beat Guram Tushishvili of Georgia for his second Olympic gold and his first at heavyweight. Bashaev rallied to claim the other bronze.

With yet another medal around his neck — albeit not the one he wanted — Riner was already thinking about the future, both short-term and long-term. He will compete for France on Saturday in the first Olympic mixed team event, giving him a chance to claim a fifth medal.

And then, of course, he realizes the next three years will be filled with pressure to cap his career on the Paris mat. Riner sounded doubly determined to extend his career to 2024.

“I'm very happy to come back with a fourth (medal)," Riner said. “As for the future, I have two options. The team competition, maybe another gold for me? And then Paris, '24, I will prepare. And then after, I close the book.”