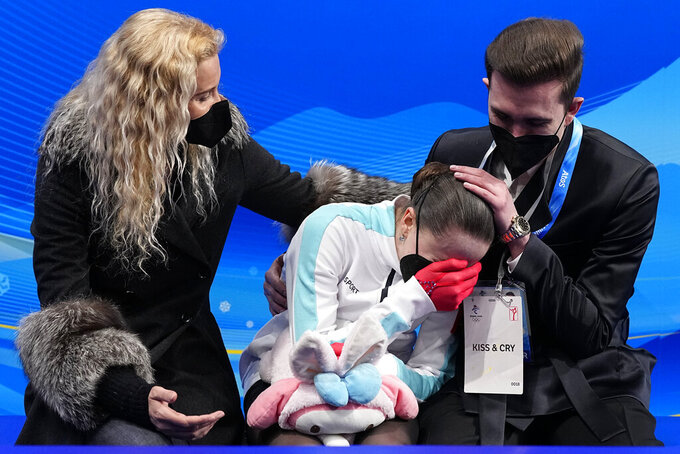 FILE - Kamila Valieva, of the Russian Olympic Committee, reacts after competing in the women's free skate program during the figure skating competition at the 2022 Winter Olympics, Thursday, Feb. 17, 2022, in Beijing. Valieva tested positive for using a banned heart medication, and the result wasn't announced by anti-doping officials until after she'd won gold as part of the team competition, even though the sample was taken weeks earlier. (AP Photo/David J. Phillip, File)

LONDON (AP) — The teenage Russian figure skater at the center of a doping scandal at last month's Beijing Olympics will skate in a competition this week in Russia.

Kamila Valieva, who won Olympic gold in the team competition before finding out that she tested positive for a banned substance before the Beijing Games began, will skate in an exhibition tournament in Russia starting Friday.

The 15-year-old Valieva was allowed to compete in the singles competition at the Olympics despite her positive test in part because of her status as a minor. She finished fourth. But since the Olympics ended, Russian athletes have been banned from international competition following their country's invasion of Ukraine.

The team event in Russia will take place in Saransk at the same time as the top figure skaters compete in the world championships in France.

The Russian exhibition tournament will feature two teams of skaters from the country competing in men's and women's singles, pairs and ice dancing. It is scheduled to start Friday and end Sunday.