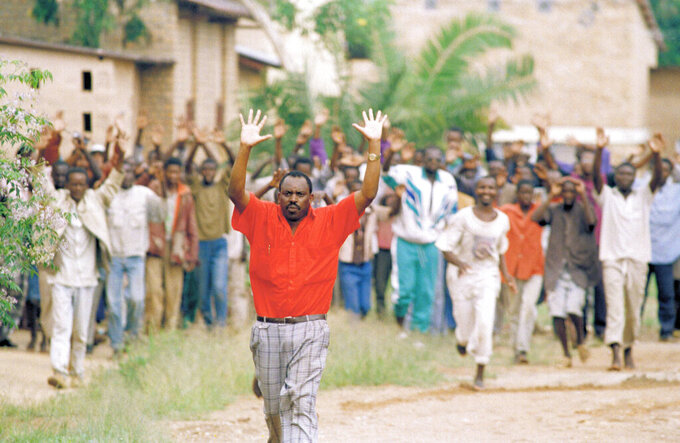 FILE - In this Wednesday, April 13, 1994 file photo, Rwandan refugees hold their hands up and ask for help from Belgian soldiers, who had come to a psychiatric hospital compound outside of Kigali. Karsten Thielker, a Pulitzer Prize-winning German photographer with The Associated Press who covered human suffering in conflict zones around the globe, has died. He was 54. Thielker died Oct. 3 in Berlin of esophageal cancer, his wife Janna Ressel said Thursday, Oct. 8, 2020. (AP Photo/Karsten Thielker, File) 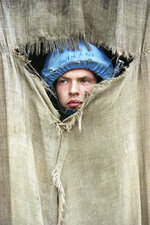 BERLIN (AP) — Karsten Thielker, a Pulitzer Prize-winning German photographer with The Associated Press who covered human suffering in conflict zones around the globe, has died. He was 54.

Thielker, who started his career at a Mainz-area regional newspaper before working for the AP from 1990-1996, was part of a team that won the Pulitzer Prize for feature photography in 1995 for photos of ethnic violence in Rwanda.

His photo of an overcrowded camp of Rwandan refugees in 1994 in Tanzania was among those selected for the prizewinning package.

Thielker's career took him to many other conflicts and war zones, including Bosnia, Somalia and Chechnya.

“During the war in Bosnia, he made a photo project about a maternity ward in besieged Sarajevo — I think it says a lot about his love for mankind,” Ressel said, reflecting upon the years her husband spent abroad covering people living, fleeing and dying in armed conflicts.

“Even greater, however, is the painful loss of an always positive, deeply sympathetic and supportive colleague and friend.”

After his years with the AP, which also included working on the photo desk in London, Thielker eventually returned to his home base of Berlin where he focused on street photography.

“Karsten was an excellent and highly talented photographer — his Pulitzer-winning work in Rwanda and long stints in the Balkans prove this beyond doubt," said Tony Hicks, AP’s Deputy Director of Photography, International.

"He was also a lovely man who made a lot of friends throughout his career and someone I am glad to say I had the pleasure of working closely with when he came to work on the London photo desk.“

Some of his most recent work included photos of life in the German capital during the coronavirus pandemic.

He also founded the photo website Berlin Daily and sometimes worked together with his wife.

“Our passion for Berlin city life connected us; I work as a city guide in Berlin,” Ressel said. “That way we could sometimes combine our work.”

Thielker is survived by two children, ages 16 and 18, and a 16-year-old stepdaughter.