Kate Nye wins rare silver medal for US in weightlifting 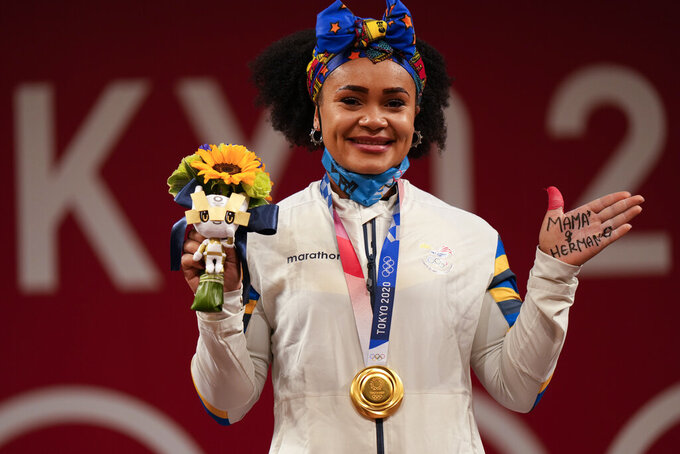 Neisi Patricia Dajomes Barrera of Ecuador shows off writing on her hand reading in Spanish, "Mom and brother," after she received the gold medal in women's 76kg weightlifting, at the 2020 Summer Olympics, Sunday, Aug. 1, 2021, in Tokyo, Japan. (AP Photo/Luca Bruno)

TOKYO (AP) — The United States had its best weightlifting result at the Olympics for 21 years. Ecuador had its first ever female champion.

Neisi Dajomes of Ecuador won the women’s 76-kilogram weightlifting event as Kate Nye took silver for the United States’ best result in the sport since 2000 on Sunday.

“It feels surreal,” Nye said. “I'll definitely savor this moment. I'm just so happy. I'm going to celebrate this because it's a huge win for me."

It’s Ecuador’s second gold of the Tokyo Olympics after Richard Carapaz won the men’s cycling road race, and only the South American nation’s fourth medal of any sort in history. All three previous medals were won by men.

The only U.S. weightlifting medals this century were gold for Tara Nott in 2000 in the first ever women’s Olympic competition, bronze for Cheryl Haworth the same year and a bronze for Sarah Robles in 2016.

Nye said the silver medal came after “the most challenging year of my career so far." She has been open about her 2019 diagnosis of bipolar disorder and said the coronavirus pandemic brought more challenges by limiting some of her usual methods for working on her mental health.

Moving up in weight class from the non-Olympic 71kg division was tough, and “between that and COVID, a coaching switch, lots of personal stuff with my mental health, it’s been a really hard year," Nye said. "But I think all of those trials and tribulations made me the person I am today and I don’t think I would be in that second-place spot without them.”

Aremi Fuentes took bronze for Mexico on a total 245kg after South Korean Kim Suhyeon had a lift which would have been enough for bronze judged invalid because she straightened her arms too late in the lift. Kim was already celebrating when the decision was announced and left the stage in tears.