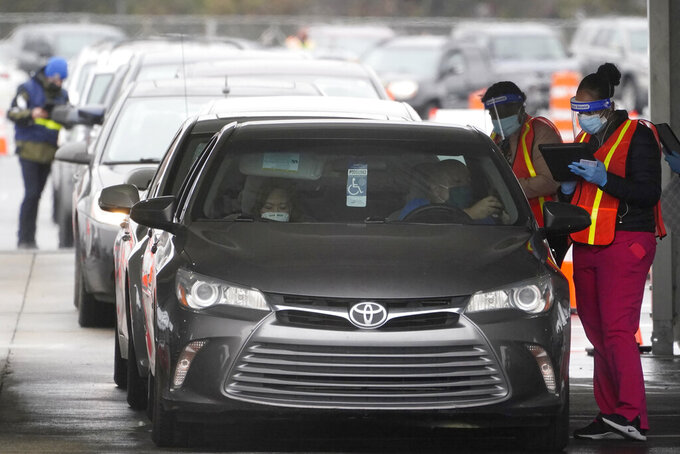 The state will open sites beginning March 17 in Columbus, Emerson, Sandersville, Savannah and Valdosta, joining sites the state is already running in Albany, Clarkesville, Hapeville and Macon. The Republican governor said Wednesday that the sites are being set up in advance of a further expansion of vaccine eligibility in the state to be announced later this month.

Numbers from the Centers for Disease Control and Prevention show that Georgia has administered only 68% of the vaccines it has received and has 1 million unadministered doses. The data show only the District of Columbia and Kansas lag further behind.

Georgia officials have disputed the CDC data for weeks and said some health providers are slow to report when they put shots in arms. The state's own numbers show it has given 76% of available vaccines, which would be in the middle of the pack among states, if no other states were allowed to adjust their numbers. Still, that's 700,000 doses on hand, when the state is getting 200,000 doses this week, rising to 223,000 next week.

“We can’t control who’s holding second doses," Kemp said. "I don’t think they should be doing that. They should be giving those doses. The supply chain is caught up. They don’t need to be doing that any more. They need to get shots in arms.”

Kemp also said there was a dip in first doses last week because of a strong demand for booster doses.

The governor has been spotlighting Georgia’s vaccination effort, trying to show himself in command of a push that will bring the state back to normal. He argued Georgia should be judged on what share of people over 65 have received shots. Kemp, who prioritized that segment over groups that some other states chose, said 60% of Georgians over 65 are now vaccinated when the national average is 49%

“I believe that we have done more than most any state to protect those who are most vulnerable to COVID-19 with the limited supply that has been given to us by the federal government," Kemp said. The governor said he believed those people were most vulnerable because they account for a majority of Georgia's 17,000-plus COVID-19 deaths.

Kemp also touted declining infections in long term care facilities and swiftly falling hospitalizations. The number of patients in hospitals has fallen by more than two-thirds since peaking in mid-January, according to state figures.

Starting Monday, preschool and K-12 school employees, adults with intellectual disabilities and their caregivers, and parents of children with complex medical conditions will be eligible to be vaccinated, adding about 1 million people to the current pool. That group includes everyone 65 and older, residents and employees of long term care facilities, medical personnel and emergency workers.

Kemp said the 83,000 doses of the newly approved Johnson & Johnson vaccine that the state expects to get this week will be prioritized for education employees. The governor continues to pair his prioritization of school systems with a call for all schools to reopen for full-time in-person instruction.

“Every student belongs in the classroom, five days a week, full time, as soon as possible,” Kemp said Wednesday. "That is my expectation moving forward."

Newly eligible people can start signing up Friday at www.MyVaccineGeorgia.com.

After a sharp decline in reported cases, numbers have stopped dropping in the past 10 days, although that may be in part because of delayed reporting of old data. However, Public Health Commissioner Kathleen Toomey acknowledged the plateau.