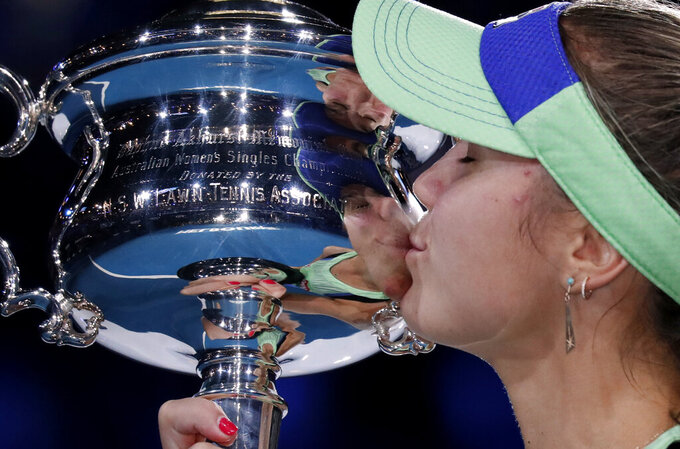 FILE - Sofia Kenin kisses the Daphne Akhurst Memorial Cup after defeating Spain's Garbine Muguruza in the women's singles final at the Australian Open tennis championship in Melbourne, Australia, in this Saturday, Feb. 1, 2020, file photo. Kenin collected the WTA Player of the Year award on Tuesday, Dec. 8, 2020, after winning the Australian Open for her first Grand Slam title and finishing as the runner-up at the French Open. (AP Photo/Lee Jin-man, FIle)

Sofia Kenin collected the WTA Player of the Year award on Tuesday after winning the Australian Open in January for her first Grand Slam title and finishing as the runner-up at the French Open in October.

The 22-year-old from Florida went 16-2 at the three major tournaments played in 2020 — Wimbledon was canceled for the first time since World War II because of the coronavirus pandemic — and ended the abbreviated season with a career-best ranking of No. 4.

In other honors announced Tuesday and based on voting by international media members, Victoria Azarenka was picked as Comeback Player of the Year, Iga Swiatek was named Most Improved Player, Nadia Podoroska was the Newcomer of the Year and Kristina Mladenovic and Timea Babos were the Doubles Team of the Year.

In two categories decided by a players’ vote, Marie Bouzkova was the recipient of the Karen Krantzcke Sportsmanship Award, and the 10 members of the WTA Players’ Council shared the Peachy Kellmeyer Player Service Award.

Kenin entered this year with an 11-11 career mark in Grand Slam tournaments and zero trips beyond the fourth round at any of the sport’s top four events. But she announced her arrival as an ascending star early in the season by beating No. 1-ranked Ash Barty in the semifinals and former No. 1 Garbiñe Muguruza in the final at Melbourne Park.

That triumph made Kenin the youngest Australian Open champion since 2008, when Maria Sharapova was 20. It also propelled Kenin into the Top 10, making her the youngest American to debut so high in the rankings since Serena Williams did it in 2002 at 20.

Kenin went on to get to the fourth round at the U.S. Open, then the final at the pandemic-postponed French Open before losing to Swiatek for the title.

Swiatek, a 19-year-old from Poland, had never won a tour-level trophy until her magical two weeks at Roland Garros, where she didn’t drop a set. She finished the year ranked 17th.

The 23-year-old Podoroska, an Argentine, also had a breakthrough in Paris, making it all the way to the semifinals as a qualifier ranked 131st before losing to Swiatek.

Azarenka won her first title in more than four years, then followed that up by reaching her first Grand Slam final in seven years by getting that far at the U.S. Open, where she lost to Naomi Osaka.

Azarenka left the tour in 2016 to become a mother and her return had some rough patches, including going a calendar year without winning a match.