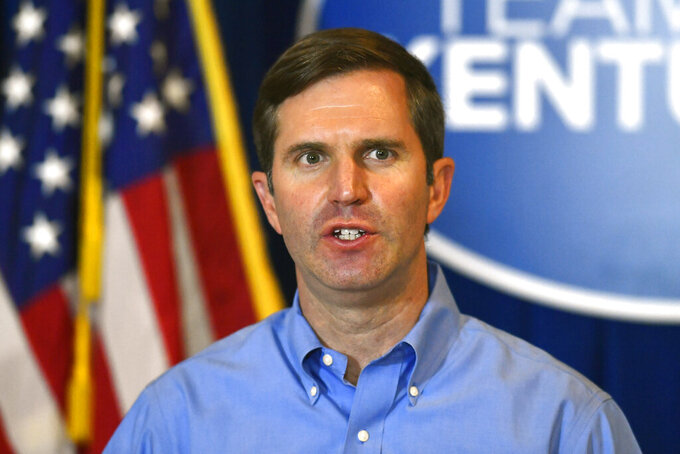 FRANKFORT, Ky. (AP) — Kentucky lawmakers will reconvene Monday to consider a stack of unfinished business, with Republicans poised to take up the Democratic governor's vetoes on everything from scholarship tax credits to his ability to fill a U.S. Senate seat if a vacancy occurs.

Efforts to curb no-knock police warrants, prompted by the March 2020 killing of Breonna Taylor by police in a raid on her Louisville home, and to relax early voting rules also remain unresolved, though there appears to be bipartisan agreement on election reform. Those bills have not yet emerged from the legislature, along with a legislative push to shield businesses from pandemic-related lawsuits.

Much of the action will reflect the state's political divide between Democratic Gov. Andy Beshear and the Republican-controlled legislature, which set the table for a contentious 2021 session.

The agenda for the session's final two days grew after a flurry of Beshear vetoes. Republicans hold supermajorities in both legislative chambers, and GOP leaders are eager to put their imprint on education policy and to water down the governor's executive authority.

A showdown is likely to come on Beshear's rejection of a bill to allow a form of scholarship tax credits to gain a foothold in parts of Kentucky to pay for private school tuition. The bill barely passed the House and sparked a chorus of criticism from public education advocates.

Two of the session's highest-profile bills are still unsettled — proposals to curb no-knock police warrants and criminalize insulting a police officer when it provokes a violent response.

Lawmakers also are talking about how to spend Kentucky's share of the $1.9 trillion federal coronavirus relief package championed by President Joe Biden. State government in Kentucky is expected to eventually receive about $2.4 billion as its share of the new pandemic aid.

It adds up to a packed agenda for the two-day conclusion of the 30-day legislative session, which ends Tuesday. GOP lawmakers lose their upper hand with any bills passed in the final two days, since they won't be able to consider overriding any vetoes of those measures.

"Unlike what we’ve seen in Congress and in some other states, in Kentucky we are on the cusp of a major bipartisan achievement that improves both voter access and election integrity,” Republican Secretary of State Michael Adams said.

Also left unfinished so far is a measure that would provide protections to shield Kentucky businesses from coronavirus-related lawsuits. The bill is backed by influential business interests, and its lead sponsor is Republican Senate President Robert Stivers.

Prospects for a high-profile bill seeking to place a partial ban on no-knock warrants also remain uncertain. The measure passed the Senate but some supporters warn that amendments filed in the House would significantly weaken the bill.

Lawmakers also need to finish work on a multibillion-dollar transportation budget, which fuels the road projects back in their districts.

Votes on veto overrides will garner considerable attention. Some of the vetoed bills continue a session-long fight between the governor and GOP lawmakers intent on reining in his executive authority.

One of the bills Beshear rejected would take away his independence in choosing someone to temporarily fill a U.S. Senate seat should a vacancy occur. The bill would require a governor to choose from a three-name list provided by party leaders from the same party as the senator who formerly held the seat. With both of Kentucky's Senate seats currently held by Republicans, that would mean GOP leaders would submit the names.

Another vetoed bill is intended to give Kentucky lawmakers the ability to deny requests for legislative records without risk of a court appeal. The measure was denounced by many media outlets as a weakening of the state's open records law.