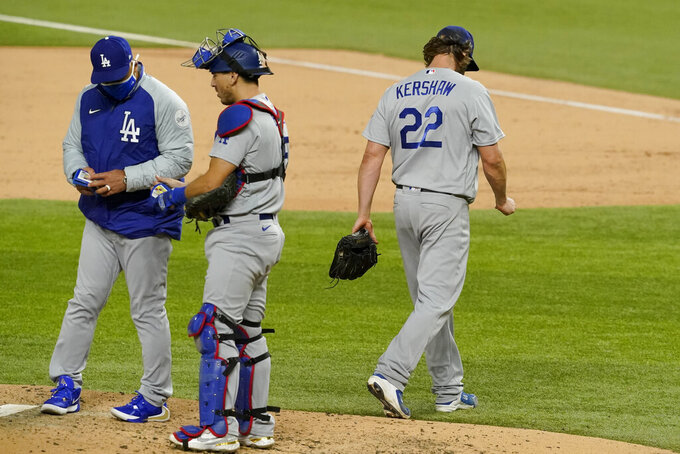 ARLINGTON, Texas (AP) — Clayton Kershaw made the slow trudge to that lonely spot in the dugout once again, this time just a few miles from his hometown.

The longtime ace of the Dodgers just can't shake his playoff curse, not even on friendly turf in a neutral-site NL Championship Series.

Kershaw faltered at the start of the sixth inning against Atlanta, allowing three straight hits before watching the rest of a six-run outburst in the Braves' 10-2 win in Game 4 on Thursday night.

Kershaw's franchise-high 12th postseason loss put Los Angeles down 3-1 in the best-of-seven series at the home of the Texas Rangers, on the brink of a second straight defeat in the NLCS after posting the best record in the majors during the pandemic-shortened season.

Pitching two days after he was scratched from a Game 2 start because of back spasms, Kershaw allowed four runs in five-plus innings, boosting his career playoff ERA to 4.31.

While the three-time NL Cy Young Award winner is also the club's career leader in postseason wins with his 11-12 record, his October resume simply doesn't match his stellar regular-season numbers: 175-76 with a 2.43 ERA.

In LA's seven trips to the NLCS over Kershaw's 13 seasons, the Dallas native is 3-6 with a 4.84 ERA. And now the left-hander has been outpitched by a rookie making his postseason debut: Atlanta's 22-year-old Game 4 winner, Bryse Wilson.

“I think that he came out and five innings, one run, again, what happened right there in that sixth inning, he gave us a chance to win the baseball game,” manager Dave Roberts said. “We couldn’t put any runs up early and get a lead, or hold a lead. That narrative couldn’t be further from the truth.”

Kershaw was handed a 1-0 lead on Edwin Ríos' homer in the third, but gave it up on Marcell Ozuna's solo shot in the fourth, the first of two for Ozuna.

In the sixth, Ronald Acuña Jr.'s high chopper eluded the glove of a leaping Kershaw behind the mound for an infield single. Freddie Freeman and Ozuna followed with consecutive RBI doubles, and Kershaw was done in Los Angeles' third loss in four games since winning its first five in the playoffs.

“It would have been nice to get Acuna out,” Kershaw said. “Just part of playing on turf. He kind of chopped that one up. Freddie, I had two strikes on him. Probably just went one too many pitches inside.”

Kershaw had never pitched near his Dallas home before doing so twice in a week and a half in this unusual postseason, first without fans in an NL Division Series sweep of San Diego and then a pandemic-reduced crowd in the NLCS.

The eight-time All-Star recorded his 11th postseason win in the Dodgers' 6-5 victory in Game 2 of the NLDS, but he was far from dominant. Manny Machado and Eric Hosmer hit back-to-back homers to cut into a 4-1 deficit.

A night after becoming the first team to score 11 runs in an inning and the first with 15 runs and five homers in the first three innings of a postseason game, the Dodgers had just three hits. Ríos’ homer was their only hit before Kershaw exited.

“Every time Kershaw gets on that mound, you want to score 20,” Ríos said. “You want to score as many runs as we can for him. It was unfortunate we weren’t able to do that tonight.”

If the Hall of Fame is in his future, Kershaw won't be alone among star pitchers who struggled in the playoffs.

Greg Maddux was 11-14 in the postseason, most of those decisions when Atlanta won just one World Series during a run of 14 straight NL East titles. Randy Johnson was 7-9, and fellow lefty Steve Carlton just 6-6.

Another lefty, David Price, was 2-9 before winning his final three decisions for Boston when the Red Sox won the World Series two years ago.

Each of those pitchers has at least one title, though. Kershaw still doesn't have one despite the club record in playoff starts (28) and innings (177 1/3).

Kershaw now has 11 career postseason starts of allowing at least four runs, tied with Maddux for the second-most. Only Andy Pettitte, another lefty, has more.

Ozuna's first homer in Game 4 was the 27th Kershaw has allowed in the playoffs, breaking a tie with Justin Verlander for second-most, also behind Pettitte (31).