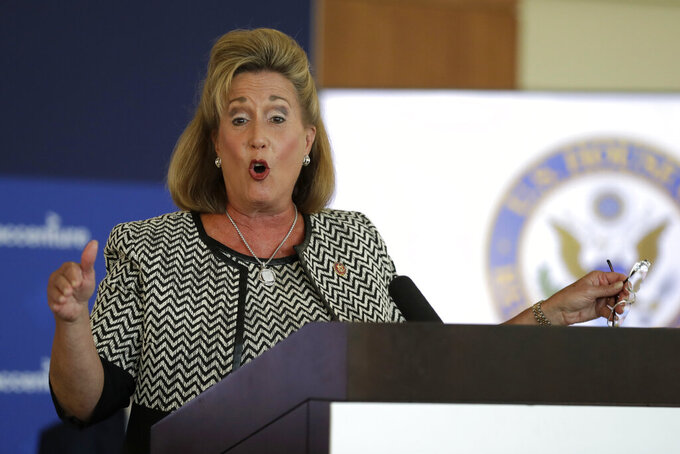 O'FALLON, Mo. (AP) — Democrat Jill Schupp and Republican Ann Wagner are sparring over health care and crime, but experts agree that the suburban St. Louis congressional race is, like many suburban races around the country, largely a referendum on President Donald Trump.

Schupp is challenging four-term incumbent Wagner in Missouri’s 2nd District, which hasn’t elected a Democrat since 1990. Although Trump has dominated the headlines since before he took office, both candidates downplayed his impact on their race.

“I have been very focused on running against Ann Wagner, not against Donald Trump,” Schupp, a 65-year-old state senator, told The Associated Press during a phone interview.

Wagner, 58, cited several accomplishments during the Trump administration, including lowering taxes and reducing regulations. But she said she and the president are very different people.

“I’m going to speak the truth, but I don’t believe that we should ever be calling people to their lowest and least, only their highest and best," Wagner said. "And I have never felt that I had to personally tear another person down to lift my values, my policies, my beliefs up. So we comport ourselves in a completely different fashion and I think that’s reflective of this district and I hope that we’ll be judged accordingly.”

But political watchers believe the top of the ticket will have a big impact on the race, and they say that should worry Wagner.

“It’s a higher income, better educated district, and it’s gotten a little more multi-ethnic. We’ve seen higher income, better educated voters moving away from the Republican Party, and particularly away from Donald Trump,” said Tom Davis, a former Virginia congressman and former head of the House Republican campaign committee. “These districts have been falling all around the country.”

Wagner is one of more than a dozen Republican incumbents from suburban areas around the country who are facing strong Democratic challengers.

The 2nd is the wealthiest of Missouri’s eight congressional districts, with a median household income of $88,684 compared to around $53,500 statewide, and its best-educated, with 51.8% of its residents having at least a bachelor’s degree, compared to 28.6% statewide.

Trump carried the district easily in 2016 and Wagner beat her Democratic opponent that year by 21 percentage points. But when Democrats captured House control in 2018, many of the 40 seats they gained were in suburban districts such as Wagner’s, whose winning margin was cut to 4 points. That underscored Trump’s plummeting support among moderate suburban voters, and Democrats think Wagner and other Republicans from such districts who survived the midterm election are vulnerable this year.

To try and win back suburban women, Trump has argued that Democratic victories would mean more crime and low-income housing in the suburbs, which would hurt property values. Campaigning in Pennsylvania this month, he implored: “Suburban women, will you please like me?”

“I have just talked to so many people who say, ‘Oh my goodness, there’s just no way I can vote for Republicans after what’s occurred the last four years,’” said Marek, 71.

“It’s a question of how much and whether that’s enough to also sink Wagner, and that’s harder to tell," Kimball said.

Beyond Trump, Republicans in suburban districts have been hurt because the GOP has shifted its focus from economic concerns to social issues that leave moderate voters like so many in the suburbs “less comfortable," Davis said.

Wagner has run several ads accusing Schupp of being soft on crime. One shows protesters stomping a police car as the narrator accuses Schupp of support from “radical defund the police organizations.”

Though some liberal activists want to completely defund police, those calling for defunding generally mean shifting money from law enforcement to things like mental health services and crime prevention.

Schupp said she does not support defunding police but does support reforms.

“In a profession where you carry a gun, when there are bad actors we need to hold them to account. We need to make sure they are removed from their position so we can start to rebuild that trust,” she said.

Much of Schupp’s focus has been on health care. She has repeatedly noted Wagner’s votes to repeal the Affordable Care Act as evidence that Wagner supports removing protections for preexisting conditions at the worst possible time — during the coronavirus pandemic.

Wagner said that although she opposes the ACA, otherwise known as Obamacare, she supports two of its provisions — covering preexisting conditions and allowing adult children to stay on their parents’ health insurance plans until age 26.

She pointed to legislation she sponsored that would make protection of preexisting conditions “an absolute fundamental right” protected by law, even if the Supreme Court strikes down the ACA.

Outside groups are spending big on the race, too. The National Republican Congressional Committee, which is campaign arm for House Republicans, has spent $1 million this month to support Wagner and plans to spend another $1.2 million on her behalf, a spokesman said. The Congressional Leadership Fund, which is a political committee closely tied to House GOP leadership, has spent another $1.5 million for her, a spokesman for that group said.

Meanwhile, the Democratic Congressional Campaign Committee has spent $1.8 million overall on the race, including nearly $1.2 million this month, a spokeswoman said, calling it “one of our top pickup opportunities in the country.”