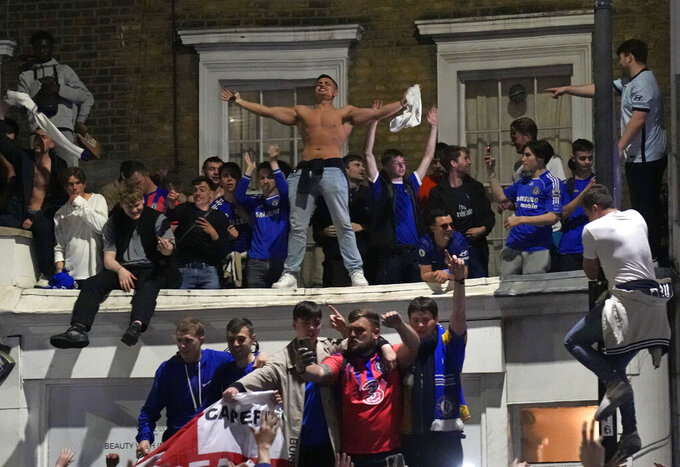 Chelsea supporters celebrate in west London, England after their team won the Champions League final soccer match between Manchester City and Chelsea which is being played at the Dragao stadium in Porto, Portugal, Saturday, May 29, 2021. Chelsea won the match 1-0. (AP Photo/Matt Dunham)

PORTO, Portugal (AP) — As Chelsea captain Cesar Azpilicueta cradled the European Cup before thrusting it into the air to the backdrop of fireworks, Pep Guardiola and his distraught Manchester City players stood way behind the winner’s rostrum and looked on in anguish.

Champions League glory once again for Chelsea, nine years after its first title and just 123 days after manager Thomas Tuchel’s season-changing arrival at the club.

Yet more misery in world soccer’s biggest club competition for City and Guardiola, its genius manager whose overthinking proved costly once more.

That the last match of a club season heavily impacted by the coronavirus pandemic was settled by a goal from Havertz felt apt, given he suffered badly after contracting the disease midway through his first year at the club having signed for nearly $100 million.

He has recovered to play a big role in Chelsea's end to the season, and showed why the club made him the centerpiece of their $300 million spending spree last offseason in the way he ran onto a through-ball by Mason Mount, rounded goalkeeper Ederson Moraes and rolled the ball into an empty net.

“I really don’t know what to say,” Havertz said. “I waited a long time for this.”

As for his fellow German,Tuchel, he only had to wait one season to get over the disappointment of losing the 2020 final when in charge of Paris Saint-Germain. Fired by PSG in December, he was hired by Chelsea a month later to resuscitate a team that had lost its way — and had dropped to ninth in the Premier League — and has delivered a Champions League title four months later.

It was billed as a tactical duel between Tuchel and Guardiola, two of the world’s most innovative coaches, and there was a clear winner.

Guardiola will surely regret tinkering with a settled team that had swept City to its first Champions League final and to the verge of another trophy treble, after winning the Premier League and the English League Cup.

Starting without a striker was expected — Guardiola has preferred that in the Champions League knockout matches — but going without a specialist holding midfielder in Fernandinho or Rodri was a major surprise and destabilized City.

City lost its shape and its renowned composure. Seeking to win the Champions League for the third time as a coach and first since 2011, Guardiola was guilty of overthinking his tactics again in a big game — as he was for City’s quarterfinal eliminations at the hands of Lyon, Tottenham and Liverpool over the past three years.

“I did what I thought was the best decision," Guardiola said.

It was a decision that backfired, though. Ilkay Gundogan, City’s top scorer this season and a revelation in his attacking-midfield role, ended up dropping in as the anchorman in midfield and he struggled to protect City’s defense.

Indeed, for Chelsea’s goal, Mount had so much time and space to thread a pass from inside his own half through the center of City’s defense -- which was opened up by Timo Werner’s decoy run -- for Havertz to run onto.

So, City’s long, often-painful and lavishly funded journey to the summit of European soccer remains incomplete. The sight of its star midfielder Kevin De Bruyne coming off the field in the 60th minute, slightly wobbly and clearly concussed after a clash for heads with Antonio Rudiger, just added to the pain and made a comeback even more unlikely.

Sergio Aguero came on in the 76th minute for his final appearance after 10 trophy-filled years at City, but the Argentina striker couldn't produce any late heroics this time.

City’s players slumped to the ground at the final whistle as Rudiger sprinted the length of the field to celebrate with the nearly 6,000 Chelsea fans who made up the 14,110 attendance at Estadio do Dragao, a late replacement venue for the title match that was originally scheduled to be staged in Turkey.

Tuchel played with his daughters on the field. Christian Pulisic, who came on as a second-half substitute to become the first American player to feature in a Champions League final, posed with the trophy in a USA sweatshirt. Mount burst into tears when he saw his father in the stands,

“What a team Man City are — you have seen what they did in the Premier League," Mount said. “It was such a tough game. We got a goal and defended well the whole game.”

City never had the control Guardiola so craves and could easily have conceded more on the counterattack.

Werner, who worked the channels well behind City’s full backs, had already squandered two great chances before the goal, first miskicking from Havertz’s cut-back and then shooting tamely at Ederson from close range.

In the second half, Pulisic ran onto Havertz’s pass but slipped a shot just wide of the post.

That didn't stop Chelsea becoming the 13th multiple European champion, adding to its title from 2012 and Tuchel becoming the third straight German to coach a Champions League-winning team after Liverpool's Juergen Klopp in 2019 and Hansi Flick at Bayern Munich last season.

“It's a huge step to arrive in the final and it's an even bigger one to bite your way through and to make it all the way to the cup,” Tuchel said. “It's a fantastic achievement.”