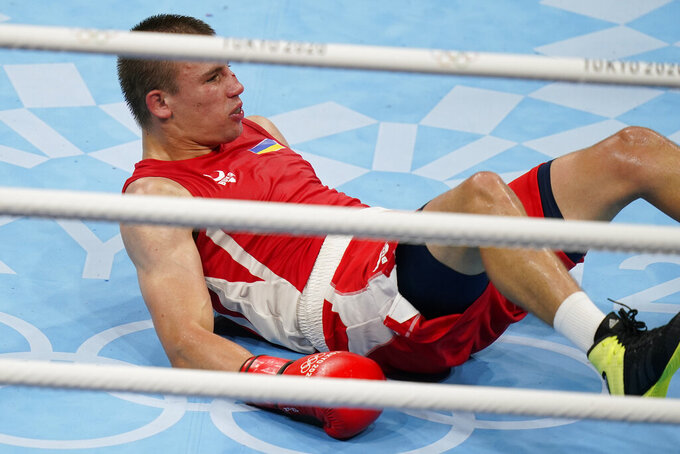 TOKYO (AP) — Hebert Sousa decisively lost each of the first two rounds in the men's middleweight final. Ukraine's top-seeded Oleksandr Khyzhniak had battered the Brazilian to the brink of defeat at the Tokyo Olympics.

When only a knockout could save him, Sousa threw a punch that changed the fight and changed his life.

Sousa stopped Khyzhniak with a left hand to the jaw midway through the third round Saturday, stealing a spectacular victory and securing only the second gold medal in Brazil's entire Olympic boxing history.

After one cinematic moment, Sousa emerged on top of the medal podium as the champion of what was almost certainly the best, deepest weight class at the Kokugikan Arena. Sousa cried as he kissed his gold medal before gently putting it around his neck.

“I don’t have that many knockouts, but I train for them a lot in my sparring sessions,” Sousa said through a translator. “I remembered what I did in sparring, and I did it a few times — and I got lucky.”

Indeed, Khyzhniak had spent the fight’s first 7 1/2 minutes smacking Sousa around the ring with his vicious combination of power and accuracy.

Khyzhniak clearly is one of the top talents in the entire 286-person Tokyo field, and he seemed likely to be a strong contender for the Val Barker Trophy as the tournament's overall top boxer. But the third-seeded Sousa’s defensive skills and cleverly angled punches had put him in the final after surprising victories over two ferocious punchers: Kazakhstan's Abilkhan Amankul and Russia's Gleb Bakshi.

Sousa also realized he got the benefit of the Olympic referees' mandate to stop bouts at the first sign of trouble for a boxer.

After his legs buckled and he ended up on his back, Khyzhniak quickly got up. The Ukrainian star was clearly aware the fight would be stopped if he didn't desperately try to continue.

Khyzhniak was on unsteady legs, although they might have settled during a standing-eight count. Instead, referee Muhammad Arisa Putra Pohan waved off the fight to protect Khyzhniak, and Sousa collapsed to his knees in disbelief.

“My feelings are very mixed," Khyzhniak said. “I won't say that I am in full agreement with what the referee did, but the match is the match, and we have the results. I didn’t get the situation at all. The judge stopped the fight at a moment when I could have probably continued. I cannot say it was even a really strong punch that hit me. I showed the referee I could continue.”

The Tokyo middleweight field was stacked with gifted fighters who should all be successful pros whenever they choose to take the step. Sousa, Khyzhniak and Bakshi were joined on the medal podium by the Philippines' Eumir Marcial, who lost a thrilling, narrow decision to Khyzhniak in the finals and headed home to resume his pro career with his country's third boxing medal in Tokyo.

Welterweight Busenaz Sürmeneli appeared to be Khyzhniak's counterpart as the top contender for the Val Barker Trophy in the women's field, and she didn't fall short in her own final. The powerhouse puncher persevered through a clinch-filled bout with China's Gu Hong to secure Turkey's first gold medal in boxing.

“I came as a champion, and I return as a legend,” Sürmeneli said.

The final capped a dominant tournament for Sürmeneli, whose four opponents all failed to win over any judge on the final scorecards of her four fights. Two judges in the final actually scored two of three rounds for Gu, whose punch-and-hold style can be infuriating to watch and to counter, but those scorecards were even because Gu was docked a point for holding.

Sürmeneli has been one of the world's top fighters over the past two years, losing only one bout since 2019 — and that was a split decision during which she got injured.

“There are really good boxers in every weight, but I can say I’m the best in my weight,” Sürmeneli said. "I'm going to work to stay the best."

Yafai claimed the powerhouse British team's first gold at his second Olympics, while the 36-year-old Krasteva capped a surprisingly dominant run at women's flyweight with Bulgaria's first boxing gold since 1996.