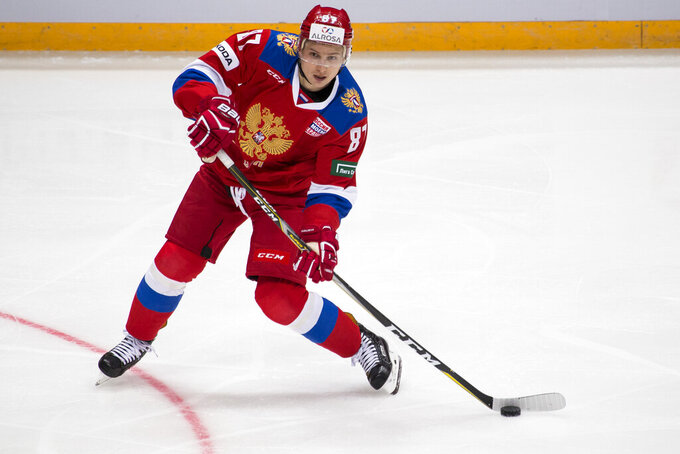 FILE- Russian Vadim Shipachyov is in action during the exhibition ice hockey match between Russia and Belarus in Moscow, Russia, Tuesday, Jan. 30, 2018. Shipachyov dressed for only one game for the Russians when they won gold at the 2018 Olympics without NHL players. Now he's their captain for the 2022 Beijing Olympics and leads the KHL in scoring with 67 points in 48 games. (AP Photo/Alexander Zemlianichenko, File)

BEIJING (AP) — David Krejci went home to the Czech Republic to play one more season in front of friends and family. Eric Staal did not get an NHL contract despite helping Montreal reach the Stanley Cup Final.

Thanks to the NHL bowing out of the Beijing Games, Krejci and Staal are at the Olympics once again.

Krejci and Staal are among the biggest names at a men's hockey tournament that's a who's who of former and likely future NHL players.

“It’s going to be competitive,” said Staal, who is Canada's captain. "It shows that the Olympic Games is something special. There’s a few other guys on other countries that were fresh off the league last year, and obviously this is a great experience for us to be able to keep playing competitively. It’s going to be great.”

Here are some players to watch when games begin Wednesday:

Just 35, the longtime Boston Bruins center would be in the NHL this season if he wanted to be. After putting up 854 points in 1,112 games in North America and winning the Cup in 2011, Krejci has 17 goals and 19 assists this season in the Czech league and is in the Olympics for the third time after playing in 2010 and 2014.

Czech Republic goaltender Roman Will said Krejci "will be the best player in the tournament.” After playing against Krejci in the NHL, Lukas Sedlak is glad they are teammates at the Olympics.

“He’s really smart,” Sedlak said. “He knows the game. He knows where to go. He thinks one step ahead, so he knows where all the players are going to be, so I think that’s his biggest strength.”

Coach Filip Pesan believes Krejci's experience on the smaller, NHL-sized ice will help and expects the wily veteran to get up to speed quickly at the international level, which is above the Czech league. The Czechs open the tournament Wednesday against Denmark, which is in the Olympics for the first time.

The new Captain Canada chuckled at the notion of being the biggest men's hockey star in the Olympics.

“Well, we’ll see when the games start,” Staal said. “I’m excited to be here. It’s been a unique couple of years here with everything going in the world and when the NHL opted to not play and my situation was what it was and I jumped at this chance.”

Staal, 37, skated in 21 games with the Montreal Canadiens in the playoffs last year when they reached the final. He won the Cup with Carolina in 2006 and with 2007 world championship and 2010 Olympic titles is one of 29 players in hockey's prestigious Triple Gold Club.

“I’m sure he wanted to add another Olympic gold to his accolades,” said Canada teammate Daniel Winnik, whose last NHL shift in 2018 came with Staal. “Eric’s going to be a calming voice in the room for us. He’s wearing the ‘C’ for a reason.”

And the “C” is not just for show. Staal is expected to be the No. 1 center for Canada, which opens the tournament Thursday against 2018 silver medalist Germany.

Among the 15 college players on the U.S. roster, Beniers offers the most potential to be a difference maker.

The No. 2 pick in the 2021 draft by the expansion Seattle Kraken, Beniers has 36 points in 28 games this season at Michigan, which is a top contender for the NCAA title. He's expected to get some power-play time for the U.S., which plays its first game Thursday against host China and its handful of American players.

Defenseman Jake Sanderson could miss that game after his travel was delayed by positive virus test results. The U.S. faces Canada on Saturday, and Sanderson's addition for that showdown and beyond would be a major boost.

The only player taken ahead of Beniers was Power, who went first to the Sabres and could join Buffalo in the NHL this spring after his college season wraps up. Power is expected to be one of the top four defensemen for Canada, which has an older roster than the U.S.

Power would have been one of Canada's best players at the world junior championship in December. That tournament getting canceled because of COVID-19 outbreak fears after play was under way means this is a second chance for Power to wear the maple leaf and make an impact.

“We kind of got notice (the Olympics) may be a possibility when the NHL announced they weren’t going,” Power said. "I don’t want to say made up (for it), but it was kind of just nice knowing that we most likely have another opportunity to come play for Canada even though world juniors was over.”

No. 3 pick Mason McTavish, who has already has three points in nine NHL games with the Anaheim Ducks, is Canada's youngest player and could see time on the top line alongside Staal.

“Great player, man,” Staal said. “He’s going to play a long time. You can tell that pretty quick. ... To be out there with him right now, for me, is a lot of fun. Great energy, great players. He’s a big, strong kid. He knows where to be on the ice, I think, getting around those dirty areas he’s real solid.”

The two youngest members of the tournament play for Slovakia. Winger Juraj Slafkovsky and defenseman Simon Nemec are 17 and projected to be first-round picks in this year's NHL draft.

“(Nemec) has incredible vision of the game, and he has a feel for hockey — how it should be played,” said longtime NHL assistant Craig Ramsay, who is coaching Slovakia. “Slafkovsky is just a giant of a guy, and he has good hands and good feet. He has amazing potential to be an NHL hocky player. Both of them, I believe, can play in the league and we’re really hoping to see good things from them and that they get a chance and they take advantage of it.”

“The people who are interested about me, I think they are going to watch,” said Slafkovsky, who wants to show “that I can play men’s level and show my strength and show that I can play in the NHL soon.”

The Russians' captain played three games in the NHL for the expansion Vegas Golden Knights in 2017-18 and scored one goal after signing a $9 million, three-year contract. He refused to report to the minors after being assigned to the American Hockey League's Chicago Wolves, had his contract terminated and returned to the KHL.

Shipachyov dressed for only one game for the Russians when they won gold at the 2018 Olympics without NHL players. Now he's their captain and leads the KHL in scoring with 67 points in 48 games.

“He’s a great passer,” teammate Mikhail Grigorenko said. “He’s one of the best passers in the world and obviously the captain, I think he’s got good leadership, too.”