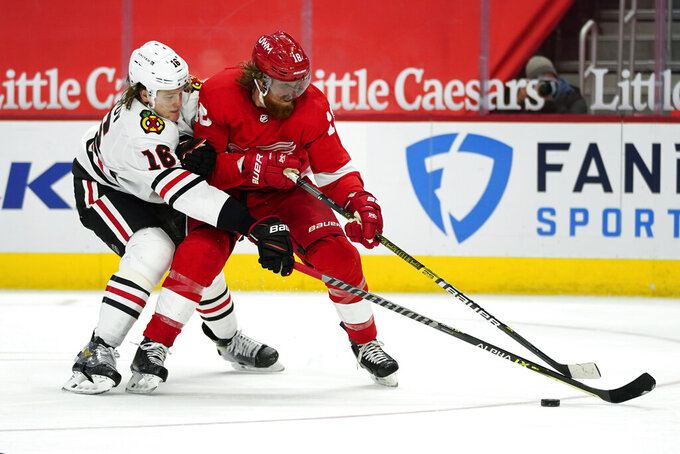 DETROIT (AP) — Dominik Kubalik scored his second goal of the game 4:43 into overtime, and the Chicago Blackhawks beat the Detroit Red Wings 3-2 on Monday night.

“It wasn’t our best, but we still found a way to win it and that’s huge," Kubalik said.

Kubalik and Mattias Janmark gave the Blackhawks a two-goal lead in the first period that they slowly lost before stepping up in the extra session. Kubalik slipped a shot between Thomas Greiss' pads, finishing a 2-on-1 rush with Pius Suter late in overtime.

“It’s not one we’re going to frame," Chicago coach Jeremy Colliton said. “But we did get two points and they can’t take them from us.”

The surprising Blackhawks won for the fifth time in six games in the opener of a six-game trip. Malcolm Subban finished with 27 stops in his fourth start of the season.

“I didn’t have to make any really big saves," Subban said.

Detroit's Vladislav Namestnikov scored with 14.1 seconds left in the opening period. After a scoreless second, Christian Djoos pulled the Red Wings into a tie early in the third.

“It’s nice to get a point, but we have to find a way to score more goals and get two points," Detroit captain Dylan Larkin said.

Greiss made 21 saves for the Red Wings, who failed to follow up a win with another victory for the fourth time this season.

“I think we’ve been a better team lately,” Detroit coach Jeff Blashill said. “We’ve adjusted some minutes to spread things out and be more of a four-line team."

The Blackhawks started strong, scoring on their first and fifth shots. Carl Soderberg’s no-look pass behind him set up Janmark 4:19 into the game. Namestnikov turned the puck over and Brandon Hagel took advantage, setting up Kubalik's goal with 3:51 remaining in the first.

Namestnikov made up for his giveaway by scoring in the final seconds of the opening period. Subban appeared to be distracted by traffic in front of the net when Djoos scored from the inside of the left circle 5:49 into the third for his first goal in his 13th game with the team.

“I thought it gave us a big boost, but we weren’t able to get the win,” Djoos said.

Chicago put center forward Lucas Wallmark on the active roster 90 minutes before the game. He was taken off the COVID-19 protocol list last week.

The Red Wings opened some concessions stands for the first time this season, allowing about 200 people attending the game to buy food and drink. Family members and friends of players, coaches and staff are primarily the fans in the stands.

Janmark got his sixth goal, matching his scoring from each of the previous two seasons in Dallas. He scored 34 goals over his first two seasons with the Stars before cooling off with a total of 12 goals the next two years.

“I’m trying to get back to my old way of playing where I have the puck more and I’m skating more and that’s been working," Janmark said.

The teams play again Wednesday night in their fourth of eight games in the NHL's pandemic-shortened, division-only regular season. Chicago is 3-0 in the season series against Detroit.