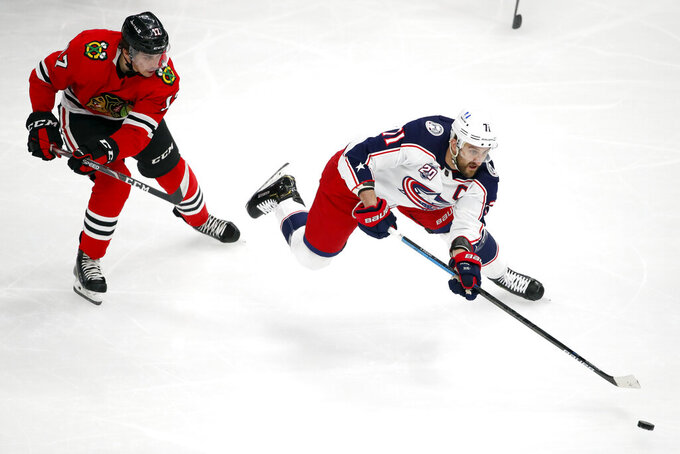 Elvis Merzlikins delivered for Columbus — until the third period.

Lankinen made 32 saves and the short-handed Blackhawks jumped on two costly mistakes by Merzlikins, topping the Blue Jackets 3-1 on Sunday.

Patrick Kane and Philipp Kurashev each had a goal and an assist for Chicago, which had dropped three in a row. The Blackhawks improved to 1-1 on a four-game homestand after losing 2-1 to the Blue Jackets on Friday night.

The game was tied before Merzlikins mishandled the puck behind his net at two different points in the third, and Chicago scored each time.

Pius Suter got to one in the corner and sent his shot off the goaltender and into the net at 7:41, lifting the Blackhawks to a 2-1 lead.

“You're just trying to get it on net because you know the guys are going to go there and if it hits him and goes in or it just bounces out, it's going to be a dangerous play,” Suter said.

On Merzlikins' second misplay, Kurashev fed Kane for his fourth goal at 13:40.

“I messed up. Not once, twice tonight,” Merzlikins said. “So (the) team doesn’t deserve this.”

Columbus had a chance to get one back when Andrew Shaw was sent off for hooking, but Chicago killed off the penalty.

“You know it's never one guy's fault,” Columbus forward Jack Roslovic said. “We need to score more goals and maybe if there's a communication thing we need to do better, and we'll find that and we'll just prepare and use that for the next game.”

Chicago got a sorely needed victory a day after it canceled practice out of concern about potential exposure to COVID-19. Blackhawks forward Ryan Carpenter and defenseman Nicolas Beaudin were placed on the NHL’s COVID-19 protocol list, joining teammates Alex DeBrincat, Adam Boqvist and Lucas Wallmark.

The league’s unavailability list covers multiple factors such as isolation due to a confirmed positive test or quarantines due to being “a high risk close contact.”

“It’s tough once it gets in the locker room. It’s obviously going to find a way to get to some people,” Shaw said. “But we’re all following protocols. We have our masks on. We’re staying away from each other. We’re doing Zoom meetings.

“I mean, we’re following all the guidelines we’re supposed to be following and the trainers are making sure of it as well and helping us out.”

The Blackhawks already were without captain Jonathan Toews because of an illness, and key forward Kirby Dach could miss the entire season after he had wrist surgery in December.

Colliton held a Zoom meeting with his team Saturday and talked about working through adversity.

“The most important thing is that we push through and we find a way to persevere anyway, and that’ll be great for us in the end,” Colliton said. “That can make our team stronger. We’re trying to build a foundation that we can rely on in hard times, so ‘Why me?’ would be the total wrong approach, I think.”

Chicago used a pretty passing sequence to jump in front in the first period. Mattias Janmark found a streaking Kane in the middle, and he touched it over to Kurashev for a tap-in at 12:32.

Columbus tied it when Jenner stuffed home a rebound with 2:32 left in the period. It was Jenner's third goal of the season.

The Blue Jackets had a chance to take the lead in the second, but Lankinen made a nice right pad save on Alexandre Texier about six minutes in. Merzlikins also faced some pressure, knocking away an open look for Chicago forward David Kampf.

Blue Jackets: Open a four-game homestand against the Dallas Stars on Tuesday night.