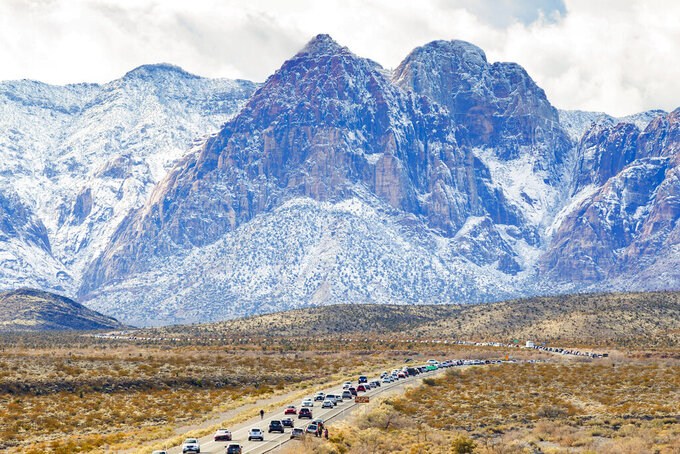 This photo by Yasmina Chavez of the Las Vegas Sun, of vehicles lined up to enter the snow-covered Red Rock Canyon following some cold and rainy weather on Dec. 27, 2019, won Photo of the Year honors from the Nevada Press Association Thursday, Sept. 24, 2020. (Yasmina Chavez/Las Vegas Sun via AP)

Michael Scott Davidson, Lauren Flannery and Rachel Aston of the Review-Journal were awarded story of the year for a series on evictions and the state policies governing them. The Reno Gazette-Journal's Anjeanette Damon won podcast of the year for her work on The City Season 2, which documented fights over a downtown strip club against a larger backdrop of urban transformation as tech titans expand their presence in Reno.

Awards in major categories were announced online over a 10-day period rather than at an in-person ceremony due to the ongoing coronavirus pandemic. Entries were judged by a panel of members of the Utah Press Association.

The Review Journal’s Rico Lacanlale was named “Journalist of Merit.” The Nevada Current’s Jeniffer Solis and Damon from the Gazette-Journal won for feature writing and business feature, respectively.

The other general excellence awards went to Edible Reno-Tahoe for magazines and the Elko Daily Free Press for rural publications.

A full list of winners will be available at the Nevada Press Association web site: https://nevadapress.com/