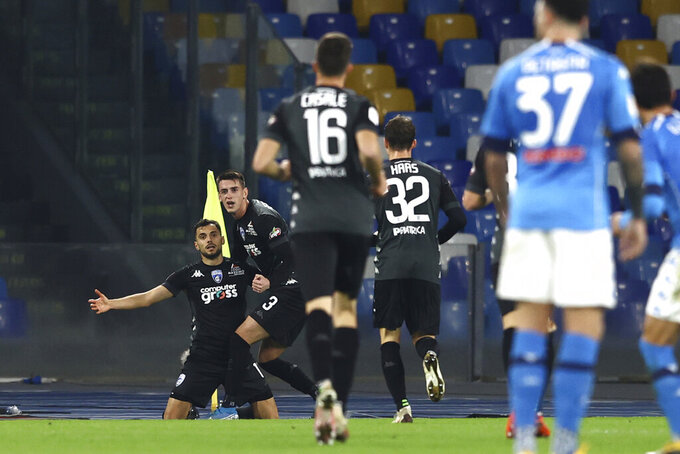 Empoli's Nedim Bajrami celebrates after scoring his team's first goal during the Italian Cup round of 16 soccer match between Napoli and Empoli, at the Diego Armando Maradona stadium in Naples, Italy, Wednesday, Jan. 13, 2021. (Alessandro Garofalo/LaPresse via AP) 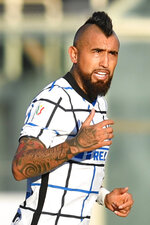 Lukaku headed home a minute before the end of extra time in Florence, just as it appeared as if the match was heading for penalties.

The score was 1-1 at the end of regular time after Fiorentina's Christian Kouamé canceled out Arturo Vidal’s opener from the penalty spot.

Inter will be the home side when it plays its city rival at the end of the month. The two Milan teams are also leading Serie A with the Rossoneri top of the league, three points ahead of second-place Inter.

Fiorentina is dangerously close to the relegation zone in Serie A but it took the Nerazzurri until five minutes before halftime to break the deadlock.

Christian Eriksen’s effort was parried by Pietro Terracciano and Alexis Sánchez hit the post with the follow-up, but the Fiorentina goalkeeper had brought down the Chile striker as he unleashed his shot and the referee pointed to the spot.

Vidal then hit the penalty down the middle for his first goal for Inter.

Fiorentina was awarded a penalty of its own moments later when Milan Škriniar appeared to foul Kouamé but the referee reversed his decision after a video review.

The hosts did equalize in the 57th minute. In a goalmouth scramble, the ball eventually fell to Kouamé who had time to control it before blasting into the top right corner.

Lukaku had been rested but he was brought on in the 69th and, moments after seeing a great chance well saved by Terracciano, scored the winner by heading in Nicolò Barella’s cross from the right.

Hamza Rafia scored the winning goal on his debut to send Juventus through to the quarterfinals.

Last year’s runner-up Juventus, which has won the cup a record 13 times, will face either Sassuolo or Spal.

Andrea Pirlo’s side was given a scare as Genoa fought back from two goals down to end regular time at 2-2. The Bianconeri had to do something they didn’t want or expect to do -- bring Cristiano Ronaldo off the bench.

But it was another substitute who made the difference as the 21-year-old Rafia fired into the bottom left corner from close range after Álvaro Morata had pulled back from the byline.

Morata and Dejan Kulusevski had scored inside 23 minutes for Juventus, which appeared to be heading for a comfortable win before goals from Lennart Czyborra and Filippo Melegoni saw Genoa level.

Defending champion Napoli was given a scare by second-division side Empoli before winning 3-2.

Napoli next faces Roma or Spezia, which play next week.

Andrea Petagna scored the winner in the 76th, turning in a rebound after Empoli midfielder Samuele Ricci had cleared Amir Rrahmani’s header off the line.

Empoli was hampered by the fact that its coach Alessio Dionisi and three players had been ordered to isolate after they were identified as close contacts to a fellow passenger on the flight they took back from a match who later tested positive for coronavirus.