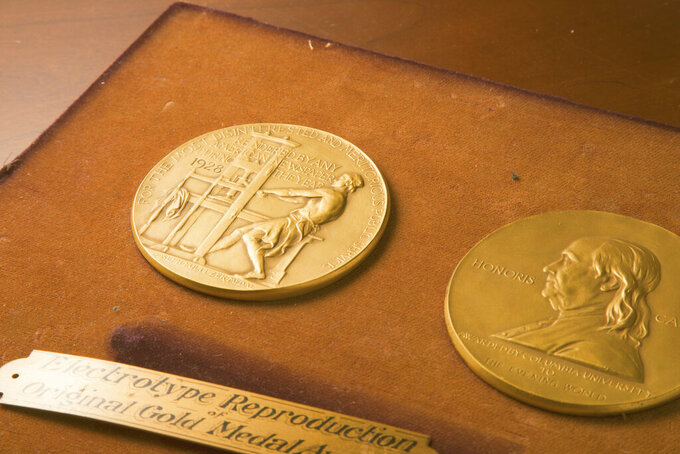 RICHMOND — Michael Paul Williams of Virginia's Richmond Times-Dispatch won this year’s prize for commentary for a series of “penetrating and historically insightful columns” about the process of dismantling the state capital city's Confederate monuments.

Williams’ winning work was written after the killing of George Floyd, which ignited removals of monuments to Confederates, colonizers and tyrants around the world. The issue was particularly resonant in Richmond, a former capital of the Confederacy steeped in Civil War history and Lost Cause iconography.

Williams wrote in July in one of his winning columns that Richmond was “now a city in search of heroes and causes we can all rally around” and that Confederate Gen. Stonewall Jackson's “likeness was lifted from a perch it never should have occupied in a just and evolved society,” after workers removed the first of many Confederate statues the mayor ordered off city property.

The newspaper’s leadership said in a joint statement that Williams’ commentary was the “centerpiece” of its coverage of Richmond’s legacy of inequity and that he wrote “with a voice that spoke to the trauma of yesterday and the hope for tomorrow.”

MORE ON THE PULITZERS:

— AP wins 2 Pulitzers for photos of pandemic pain, US unrest

NEW YORK — One of the country’s most esteemed novelists, Louise Erdrich, won the Pulitzer Prize for fiction for “The Night Watchman.” Other winners for books include the late Les Payne and daughter Tamara Payne for their Malcolm X biography “The Dead Are Arising.”

Marcia Chatelain’s “Franchise: The Golden Arches in Black America” won for history. Natalie Diaz’s “Postcolonial Love Poem” was the poetry winner and David Zucchino’s “Wilmington’s Lie: The Murderous Coup of 1898 and the Rise of White Supremacy” was cited for general nonfiction.

Tani Leon’s composition “Stride” was the winner for music.

NEW YORK — The Pulitzer board recognized two winners in the Explanatory Reporting category that touched on the major stories of the year.

Ed Yong of The Atlantic won for a “lucid, definitive” series on the pandemic which the board said “anticipated the course of the disease, synthesized the complex challenges the country faced, illuminated the US government’s failures and provided clear and accessible context to the scientific and human challenges it posed.”

Andrew Chung, Lawrence Hurley, Andrea Januta, Jaimi Dowdell and Jackie Botts of Reuters won for an investigation of the legal concept of qualified immunity and how it shields police from prosecution. The board cited the examination of court cases “powered by a pioneering data analysis.”

Matt Rocheleau, Vernal Coleman, Laura Crimaldi, Evan Allen and Brendan McCarthy were recognized “for reporting that uncovered a systematic failure by state governments to share information about dangerous truck drivers that could have kept them off the road,” the Pulitzer board said.

Brendan McCarthy, the editor on the series, said the Globe “quickly found that this kind of tragedy had been happening year after year for decades. The problems were in plain sight but had never been addressed.”

NEW YORK — “The Hot Wing King” by Katori Hall, a play set around a hot wing cooking competition, has won the 2021 Pulitzer Prize for drama during a theater season that saw most venues largely shuttered.

With most theaters closed during the pandemic, the Pulitzer Prize Board altered the requirements for this year’s drama award, allowing postponed or canceled works, as well as plays produced and performed in places other than theaters. “The Hot Wing King” opened off-Broadway just days before the city’s theaters were closed.

Hall is the author of the Olivier Award-winning “The Mountaintop” and is a Tony Award-nominated co-playwright of Broadway’s “Tina — The Tina Turner Musical.”

NEW YORK — The Pulitzer Prize for public service journalism has been awarded to The New York Times for its reporting on the coronavirus.

The Times’ reporting on the pandemic stood out in 2020 for its depth and accessibility.

The paper provided a wealth of data in easy-to-digest forms, including graphs on new cases and hospitalizations, a map of hot spots and a table on trends by state.

The Pulitzer committee said the Times was recognized for “courageous, prescient and sweeping coverage of the coronavirus pandemic that exposed racial and economic inequities, government failures in the U.S. and beyond and filled a data vacuum that helped local governments, health care providers, businesses and individuals to be better prepared and protected.”

MINNEAPOLIS — The teenager whose video documenting the death of George Floyd set off a global movement over racial injustice has been awarded a special citation by the Pulitzer Prizes.

Darnella Frazier was cited “for courageously recording the murder of George Floyd, a video that spurred protests against police brutality, around the world, highlighting the crucial role of citizens in journalists quest for truth and justice.”

Frazier was 17 when she recorded Floyd’s death in May 2020 at the hands of Minneapolis police.

NEW YORK — The Associated Press has won two Pulitzer Prizes for photography for its coverage of racial injustice protests in the U.S. and the coronavirus pandemic’s toll on the elderly in Spain.

AP’s chief photographer in Spain, Emilio Morenatti, won the feature photography prize for documenting the impact of COVID-19 on elders.

One of his winning images captured an older couple hugging and kissing through a plastic sheet.

Work by 10 AP photographers won the breaking news prize for covering protests that roiled U.S. cities after the May 2020 death of George Floyd, a Black man killed by a police officer.

Photographers dodged rubber bullets and tear gas to capture close-up images of demonstrators with fists in the air and sometimes violent conflicts with police.

With the wins, AP has now received 56 Pulitzer Prizes, including 34 for photography.

MINNEAPOLIS — The Star Tribune, of Minneapolis, has won a Pulitzer Prize for breaking news for its coverage of the May 25, 2020, killing of George Floyd and the resulting civil unrest that tore through the city.

Floyd, a Black man, died as he was being pinned to the ground by Minneapolis police officer Derek Chauvin.

Video of Chauvin kneeling on Floyd’s neck for 9 minutes, 29 seconds sparked a wave of protests, first in the Twin Cities and then nationwide.

Star Tribune journalists covered the rage in Minneapolis, where protesters burned buildings including a police station. The Pulitzer board called the coverage “urgent, authoritative and nuanced.”

Chauvin was later convicted of murder.