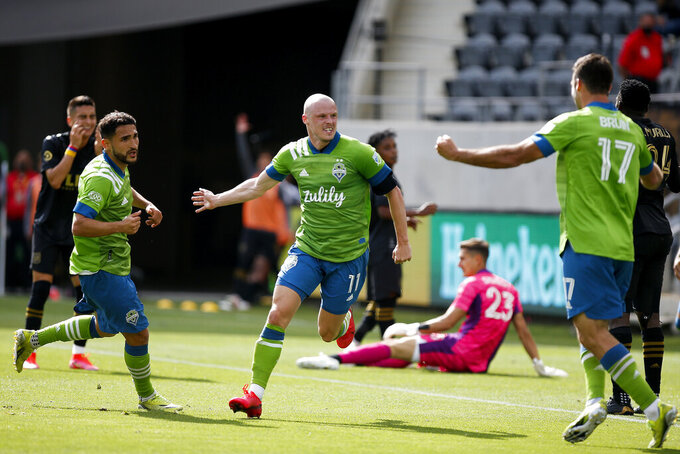 Seattle Sounders defender Brad Smith (11) celebrates his goal between midfielder Cristian Roldan (7) and forward Will Bruin (17) during the second half of an MLS soccer match against the Los Angeles FC, Saturday, April 24, 2021, in Los Angeles. The game ended in a 1-1 draw. (AP Photo/Ringo H.W. Chiu)

The Seattle Sounders say their entire first team roster and team support staff are fully vaccinated against COVID-19, and the team will begin offering vaccinations to eligible fans at home games beginning this Sunday against the LA Galaxy.

The Sounders said all eligible players and staff for the Tacoma Defiance, the club’s USL franchise, are also fully vaccinated.

“Vaccinating all players and support staff across both our first team and Tacoma Defiance groups is a major milestone for our club,” Sounders general manager Garth Lagerwey said. “Bringing everyone to this moment safely would not have been possible without a lot of focused and dedicated people, but, in particular, I want to recognize our exemplary medical staff for steering us through the past year.”

The team said it will partner with Virginia Mason Franciscan Health and the city of Seattle to offer either the one-shot Johnson & Johnson or two-shot Moderna vaccines to fans starting with this Sunday’s game. Vaccinations will be offered on a walk-up basis and be available to fans from the time gates open through the end of the match.

Fans will also be offered a voucher for a free hot dog inside the stadium after receiving their vaccination shot.

The American Hockey League will not crown a Calder Cup champion for a second consecutive season amid pandemic scheduling concerns. The trophy had been awarded every year from 1937 to 2019.

The AHL allowed each of its five divisions created for this season decide a playoff format. Only the Pacific Division will have a postseason tournament.

“While we are disappointed that we will not be able to award the Calder Cup this spring, we are grateful to have been able to provide a safe and competitive environment for more than 1,000 players to play AHL hockey and continue their development," said Scott Howson, the league’s president and CEO.

The AHL, the top developmental hockey league for the NHL, said Thursday it plans to start next season on Oct. 15.

The Chicago Bulls and Blackhawks are ready to welcome spectators back to the United Center on a limited basis.

The teams announced Thursday they have permission from the city and state to host fans at 25% capacity starting with Bulls vs. Boston Celtics on May 7 and Blackhawks vs. Dallas Stars on May 9. They will also allow a few hundred player family members and team-invited guests starting with the Blackhawks’ game against the Florida Panthers on Saturday.

Tickets will be sold in groups of two to four adjacent seats. No two groups of seats throughout the arena will be closer than 6 feet apart, and there will be no need to cross over other parties in the same row.

Fans over age 2 will be required to wear masks except when eating and drinking.