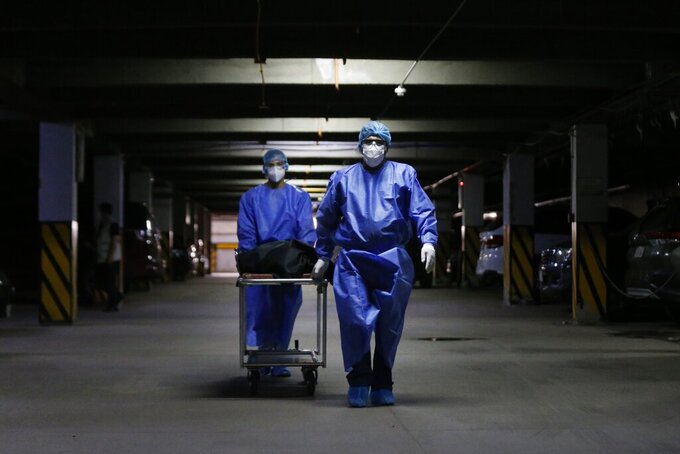 DETROIT — The archbishop of Detroit says face masks are no longer mandatory inside Roman Catholic churches in southeastern Michigan for people who have been vaccinated against the coronavirus.

Archbishop Allen Vigneron said Wednesday that anyone who hasn’t been vaccinated must still wear masks at Mass and other church services.

The church will rely on people to police themselves. The archbishop says that “parishes do not have the responsibility to verify who is and who is not vaccinated.”

Vigneron also says priests will no longer have to limit church capacity to 50%.

There are approximately 1.3 million Catholics in the six counties that make up the Detroit Archdiocese.

— Spain, in bid to rally economy, wants tourists within weeks

UNITED NATIONS -- The U.N. Security Council is calling for accelerated availability of coronavirus vaccines for Africa, expressing concern the continent has received only about 2% of all vaccines administered globally.

A presidential statement approved by all 15 members at a council meeting Wednesday on promoting post-pandemic recovery in Africa and addressing the root causes of conflict on the continent reiterated the need for “equitable access to quality, safe, efficacious, and affordable COVID-19 diagnostics, therapeutics, medicines and vaccinations to all.”

It calls for “increased and accelerated donation of safe and effective vaccine doses from developed economies” and others with supplies to African countries in need, especially through the World Health Organization’s ACT-Accelerator program, which includes the COVAX facility to buy and deliver vaccines for the world’s poorest countries.

The council acknowledged ongoing discussions on waiving intellectual property protections for COVID-19 vaccines aimed at providing vaccinations to Africans and all others in need.

BOSTON — Research from 280 nursing homes in 21 states across the U.S. gives a real-world look at how well COVID-19 vaccines are protecting residents who did and did not get the shots.

About 1% of residents tested positive for the virus within two weeks of receiving their second dose, and only 0.3% did more than two weeks after being fully vaccinated, researchers from Brown University and the Genesis HealthCare network reported Wednesday in the New England Journal of Medicine.

Most of the cases did not produce any symptoms.

The shots also seemed to help protect unvaccinated residents: Cases dropped from 4.3% within two weeks of the first vaccination clinic to 0.3% more than 42 days after the event among folks who had not received either the Pfizer or Moderna vaccine.

WASHINGTON — Nervous to get her vaccination shot, Maya Davis, 12, of Washington, held hands with her mother, Maisha Cosby, as she received the Pfizer COVID-19 vaccine, Wednesday from inside their car at a drive-thru clinic held by Community of Hope, a community health organization, at the Washington School for Girls in southeast Washington.

Several schools sent information about the vaccine drive to their students’ families to ensure access to the vaccine, newly approved for children ages 12-15.

Cosby also received a vaccine at the event, “I’d been waiting it out a bit to make sure people weren’t dropping dead,” joked Cosby, “all my friends have gotten it and they’re fine and I’m ready for her to go back to school.”

Emergent has received more than $271 million but hasn’t produced any doses that could be distributed.

The company was handed the contract in May 2020, despite multiple Food and Drug Administration inspections documenting poor quality controls and inadequate strategy for preventing contamination. Despite FDA warnings, Emergent didn’t correct those problems, leading to contamination of about 15 million J&J doses since discarded. More than 100 million additional J&J doses are undergoing FDA safety testing.

MIAMI — Baseball fans in Florida won’t be required to wear masks the next time they watch the Miami Marlins or the Tampa Bay Rays play at their home fields.

Both teams updated their coronavirus mask policies on Wednesday following recent changes to Centers for Disease Control and Prevention recommendations.

The Marlins new policy states that no fans will be required to wear masks, though non-vaccinated individuals are strongly encouraged to wear one. Vaccinated fans attending Rays games can leave their faces uncovered, but the team’s announcement says unvaccinated fans must wear masks at the ballpark. It wasn’t clear how park staff would determine who was vaccinated or how the rule would be enforced.

The CDC last week said people who are fully vaccinated no longer need to wear a mask indoors or outdoors and can stop social distancing in most places.

The next Marlins home game is Friday against the New York Mets. The Rays return to Florida on Tuesday to face the Kansas City Royals.

LONDON — The British government says about 3,000 people will be given a third dose of a coronavirus vaccine in a clinical trial to determine if booster shots provide additional protection against COVID-19 and its variants.

The COV-Boost trial will test seven existing vaccines to see what shots could be used in any upcoming vaccination program later this year. Some 2,886 people age 30 and older are being recruited at 18 sites across the U.K., with the first booster shots to be administered in early June.

Most people vaccinated in Britain have been given the Pfizer or AstraZeneca shots. Other vaccines to be tested in the booster trial are Moderna, Novavax, Johnson & Johnson, Valneva and CureVac.

British Health Secretary Matt Hancock says the data “from this world-first clinical trial will help shape the plans for our booster program later this year.”

ANCHORAGE, Alaska — Norwegian Cruise Line has resumed sales for cruises to Alaska after the U.S. Senate passed a bill last week that could save the state’s upcoming cruise season.

That’s raising summer tourism hopes for a state that depends heavily on the sector. The Alaska Tourism Restoration Act that passed unanimously in the U.S. Senate would temporarily allow large cruise ships to skip required stops in Canadian ports as they travel between Washington and Alaska.

If the bill passes in the House and is signed by President Joe Biden, cruise ship companies could avoid Canada’s ban on stops by passenger vessels that lasts until 2022.

NATCHEZ, Miss. — Several immigrants’ rights groups filed a complaint against those running a U.S. Immigration and Customs Enforcement detention center in Mississippi, saying it’s experiencing the largest COVID-19 outbreak at any ICE facility in the country because safety policies aren’t being followed.

In a letter sent to U.S. Department of Homeland Security officials on Monday, 15 organizations said the New Orleans field office is violating COVID-19 policies issued by the U.S. Centers for Disease Control and Prevention — and ICE itself.

The civil rights and liberties complaint says detainees are grouped close together in holding rooms at the Adams County Detention Center, making social distancing impossible, and they don’t have consistent access to soap or disinfecting supplies. The groups also wrote guards refuse to wear facemasks and ICE hasn’t made an effort to vaccinate incoming detained immigrants.

Spokesperson Sarah Loicano say ICE has taken a “strategic approach” to combat the virus and protect everyone at its facilities. Loicano says in an email that “ICE and the on-site medical professionals continue to take the necessary steps to quickly isolate the exposed detainees, provide proper medical care and prevent further spread infection.”

The move is the first by the kingdom to tie the economic reopening to its vaccination campaign. It follows similar steps by other Gulf Arab emirates, including the city-state of Dubai and island nation of Bahrain.

The brief statement from the official Saudi Press Agency, citing the Interior Ministry, declared on Aug. 1 that vaccination would be obligatory for those wishing to attend sporting and entertainment events, participate in cultural activities and enter various private and public establishments.

It didn’t say how authorities would implement the restrictions in the country of more than 30 million beyond that residents would need to show their vaccination status on the government-approved health app. Saudi Arabia, relying on Pfizer and AstraZeneca shots, has vaccinated some 11.5 million residents with at least one dose.

This week, the kingdom loosened a yearlong, virus-induced travel ban, allowing vaccinated Saudis to leave the kingdom. Despite the inoculation campaign, the daily case count rose above 1,200 on Wednesday for the first time in several months.

During the past month, Citu has repeatedly expressed a goal to vaccinate 5 million people by June 1, a date earmarked for new relaxations. Reaching that target now looks uncertain, but in recent weeks coronavirus infections have significantly dropped in the Eastern European nation.

“We can reach five million (vaccinated), but the goal, in fact, is not to reach a certain figure,” Citu said after a government meeting Wednesday. “The goal is to overcome the pandemic, and this is only possible through vaccination. I believe Romanians have understood the message and will get vaccinated.”

BUENOS AIRES, Argentina — Argentina is hitting records of coronavirus infections and deaths, despite managing to get at least one dose of vaccine to nearly 20% of its people.

The Health Ministry reported 745 more deaths and 35,543 new infections on Tuesday in the country of about 45 million people. Those were the worst figures yet in the pandemic for Argentina, which has more than 71,000 total confirmed deaths.

“The situation is desperate,“ said Claudio Belocopitt, president of the Argentine Union of Private Health Entitities.

The country has given at least one vaccination to more than 10 million people, although only about 2 million have received both shots.

ISLAMABAD — Pakistan is easing coronavirus-related restrictions amid a steady decline in infections and deaths.

The announcement comes hours after Pakistan reported 104 single-day deaths from coronavirus in the past 24 hours. According to a government announcement, schools will reopen Monday in those districts where positivity rates are less than 5%.

The government will allow outdoor marriages and outdoor dining at restaurants, with adherence to social distancing rules. The closure of cinemas, gyms, shrines and a ban on indoor dining will remain in place.