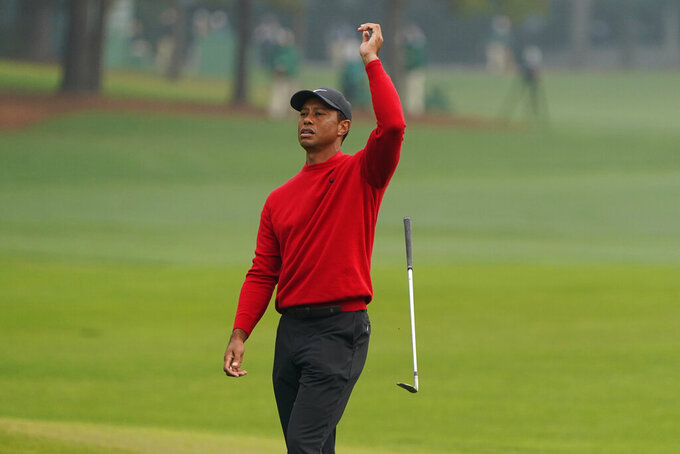 Tiger Woods reacts after a near chip in on the second hole during the final round of the Masters golf tournament Sunday, Nov. 15, 2020, in Augusta, Ga. (AP Photo/Chris Carlson)

Dustin Johnson has won the Masters, shooting a 68 in the final round to finish at 20-under par and win the pandemic-delayed tournament by five strokes.

The 2016 U.S. Open champion claimed his second major. He is the 12th player to win without ever trailing at the end of any round.

Tiger Woods needed a late rally on the back nine to avoid his worst score ever at the Masters.

The defending champion birdied five of the last six holes to come in at 4-over 76 on Sunday. That didn’t quite make up for his septuple-bogey 10 on the 12th hole, a par 3 where he put three balls in the water.

Nineteen months after winning his fifth green jacket, Woods left the course at 1 under for the tournament. At the time, he was 16 strokes behind leader Dustin Johnson.

Woods' worst score ever at the Masters was a 77 in the third round of his first appearance, in 1995, when he was still an amateur.

Bernhard Langer has wrapped up a remarkable performance for the ages at Augusta National.

After becoming the oldest player to make the cut in the Masters, the 63-year-old German closed with a 1-under 71 to finish at 3 under overall.

Even though Langer ranked last among the 60 weekend players in driving average (260 yards), his experience and touch around the greens allowed him to finish ahead of plenty of younger players.

One of those Langer beat was Bryson DeChambeau, the longest hitter on the PGA Tour and the betting favorite coming into the week. They played together on Sunday, with DeChambeau shooting a 73 to finish one stroke behind Langer.

Dustin Johnson has made the turn in the final round of the Masters with a two-shot lead over Cameron Smith.

Johnson stumbled a bit in the middle of the front nine, making back-to-back bogeys at the fourth and fifth holes. That broke a stretch of 33 consecutive holes without a bogey going back to the second round.

With his lead down to one shot, Johnson bounced back with a birdie at the par-3 sixth. He added another at the eighth and went to the back side with a 1-under 35 on the day, pushing his overall score to 17 under.

Johnson is trying to capture his second major championship. He won the 2016 U.S. Open at Oakmont, but he's also failed to win four times with a 54-hole lead in a major.

He came into the final round at Augusta with a four-stroke lead over Smith, Sungjae Im and Abraham Ancer. Im remains four shots back, while Ancer has dropped eight strokes off the pace.

Tiger Woods should've brought his swim trunks to the final round of the Masters.

The defending champion knocked three balls into the water at the par-3 12th hole, a stunning turn at the shortest hole on the course.

Last year at the very same hole, Woods got a huge break on his way to a fifth green jacket when four of his competitors dumped shots into Rae's Creek.

This time, it was Woods who fell apart at Golden Bell.

His tee shot rolled back into the water, then he dunked another in similar fashion after taking a drop. Woods pitched his next one over the green, into a back bunker, leaving him with an extremely awkward stance for what was officially his sixth shot. He lined that one into the water as well.

Finally, Woods finished off a septuple-bogey 10 — his worst score ever at the Masters. Previously, he had made 8s on a pair of much longer holes.

Dustin Johnson has finally made another bogey at Augusta National.

The Masters leader three-putted from just off the front of the green at the par-3 fourth hole in the final round. Johnson's knees buckled as a 9-footer to save par slid by the hole, breaking a streak of 33 holes since his last bogey in the second round.

Johnson remains at 16 under and holds a two-shot lead over South Korea's Sungjae Im.

The Masters is mixing things up with the hole locations in the final round.

Among the interesting pin locations is No. 16, a 170-yard par 3 known as Redbud, where golfers hit their tee shots over a pond to a ridged green protected on three sides by bunkers.

The hole this year is tucked to the back and right. For many years, the final-round pin placement for the 16th has been at the bottom of a ridge tucked beside a bunker and the water.

Sunday's location is where Jack Nicklaus made his famous 40-foot birdie putt in 1975 to help him win his fifth green jacket.

The final round of the Masters began with another weather delay, this one only 10 minutes because of fog.

When it lifted, it was clear what Sunday had in store: Dustin Johnson with a four-shot lead in a bid to win the green jacket and end a decade of questions about his ability to close out majors from in front.

Johnson is the 16th player to lead by four shots or more going into the final round at Augusta National. Only four players failed to win from that position — Ken Venturi in 1956, Ed Sneed in 1979, Greg Norman in 1996 and Rory McIlroy in 2011.

Johnson already has tied the 54-hole record at 16-under 200. With soft conditions in the autumn, there has been record low scoring. The tournament record is 18-under 270 by Jordan Spieth and Tiger Woods.