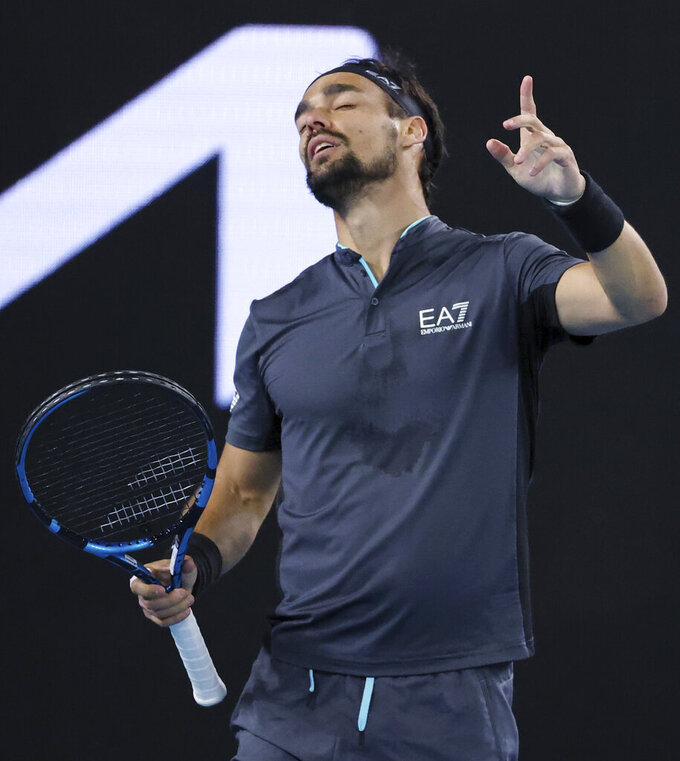 Australian Open organizers say the player from Greece’s ATP Cup team who tested positive for COVID-19 on arrival in South Africa had returned a negative result the day he left Melbourne.

Michail Pervolarakis played in the Greek team with Stefanos Tsitsipas last week in one of the six tuneup tournaments for the Australian Open.

The No. 463-ranked Pervolarakis lost both singles matches he contested at the ATP Cup and didn’t play in the Australian Open.

Pervolarakis said in an Instagram post Saturday that he was in quarantine in a city southwest of Johannesburg after a “24+ hour travel day.”

In the post he said “I am completely asymptomatic at the moment and will have to quarantine in an isolation facility in Potchefstroom.”

The Australian Associated Press reported that Australian Open organizers were aware of Pervolarakis’ positive test but remained confident the tournament is coronavirus free.

About 1,200 people who traveled to Australia for the tournament went into a 14-day hotel quarantine on arrival and were tested daily.

Melbourne started a five-day lockdown on Saturday after COVID-19 cases emerged from a hotel that was not part of the tennis quarantine program. That means no fans are allowed into Melbourne Park.

Rafael Nadal extended his winning streak against fellow left-handers to 16 with a 7-5, 6-2, 7-5 victory over Cameron Norrie that earned him a place in the Australian Open’s fourth round.

Nadal is chasing a men’s record 21st major title but entered the tournament with back stiffness and without any competitive matches in 2021. He reached the fourth round at Melbourne Park for the 14th time in 16 trips.

The No. 2-seeded Nadal had a solid outing against the No. 69-ranked Norrie. He had only one double-fault and was broken just once. Uncharacteristically, he did have more unforced errors (35) than winners (33).

Nadal said: “First matches in a lot of time. I’ve had three matches that I hope will help me for what’s coming.”

Nadal will next play No. 16 Fabio Fognini. The veteran Italian had a straight-set win over Australia’s last hope in the men’s draw, 21st-seeded Alex de Minaur.

Ash Barty has taken another step toward winning her home major. The top-seeded Australian beat Ekaterina Alexandrova of Russia 6-2, 6-4 to reach the fourth round of the Australian Open for the third straight year.

Barty said she'd never played at tour-level without a crowd before Saturday’s match in Margaret Court Arena. She said in her on-court interview she liked the sound of striking the ball in the empty stadium. She added, “It feels a little bit like practice, so we’re pretty used to it.”

Barty next faces American Shelby Rogers for a chance to reach the quarterfinals.

Rublev and Medevedev both went unbeaten in the 12-team ATP Cup last week to clinch the title for Russia.

The seventh-seeded Rublev will meet Casper Ruud of Norway in the fourth round.

No. 5 seed Stefanos Tsitsipas beat Mikael Ymer of Sweden 6-4, 6-1, 6-1 in the third round. It was a much more straight-forward outing than his five-set marathon against Thanasi Kokkinakis in the second round.

Elise Mertens continued her winning start to 2021 with a 6-2, 6-1 victory over 11th-seeded Belinda Bencic to reach the fourth round of the Australian Open.

The No. 18-seeded Mertens won a tuneup tournament at Melbourne Park in the week between players coming out of mandatory quarantine in Australia and when the year’s first major tournament started.

The 2018 Australian Open semifinalist will take a seven-match winning streak into her fourth-rounder against No. 25 Karolina Muchova.

Fourth-seeded Daniil Medvedev achieved a career first as he advanced to the fourth round of the Australian Open, finally winning a match that went to five sets.

The win stretched Medvedev’s winning streak to 17 matches, a stretch that includes the title at the 2020 season-ending ATP Finals.

Unseeded American Mackenzie McDonald has matched his best Grand Slam result by reaching the round of 16 at the Australian Open. He advanced when he beat Lloyd Harris 7-6 (7), 6-1, 6-4.

McDonald is a former top-60 player, but his ranking fell to No. 272 last year after he was sidelined for seven months by a hamstring injury. His ranking is back up to No. 192.

Unseeded American Jessica Pegula has advanced to the fourth round at a Grand Slam tournament for the first time by beating Kristina Mladenovic 6-2, 6-1 at the Australian Open.

Pegula, who is ranked 61st, lost the first six points but then began to dominate with her versatile game. She hit 21 winners to just 13 unforced errors and won eight points at the net.

The previous best showing at a Grand Slam by the 26-year-old native of Buffalo, New York, was a run to the third round at last year’s U.S. Open. Pegula will next play No. 5-seeded Elina Svitolina, who beat No. 26 Yulia Putintseva, 6-4, 6-0.

Day six is underway at the Australian Open, this time without fans.

The Victoria state government on Friday announced a five-day lockdown in response to a COVID-19 outbreak at a hotel. Up to 30,000 fans daily — 50% of capacity — had been admitted for earlier sessions.

Top-seeded Ash Barty of Australia was to play a night match Saturday against No. 29 Ekaterina Alexandrova. Three American women were on the schedule — No. 22 Jennifer Brady and two unseeded players, Jessica Pegula and Shelby Rogers

No. 2-seeded Rafael Nadal was to continue his quest for a men’s-record 21st major title Saturday night against Cameron Norrie. Other men in third-round action Saturday included No. 4 Daniil Medvedev, No. 5 Stefanos Tsitsipas, No. 7 Andrey Rublev, No. 9 Matteo Berrettini and the last American on the men’s side, unseeded Mackenzie McDonald.