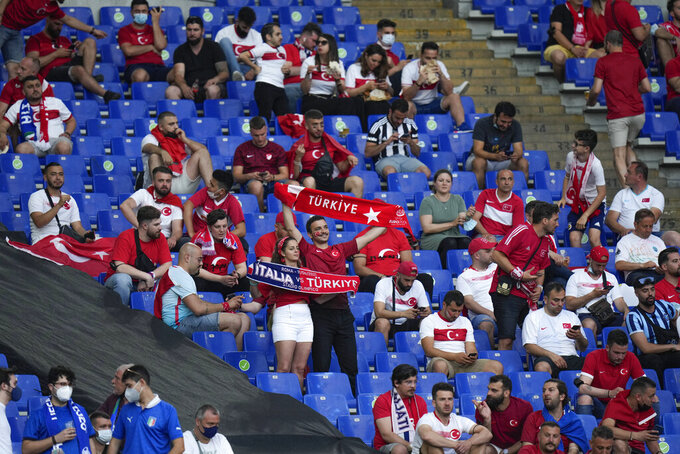 Turkish fans wait for the kick-off of the Euro 2020, group A soccer match between Italy and Turkey, at the Rome Olympic stadium, Friday, June 11, 2021. (AP Photo/Alessandra Tarantino, Pool)

The Latest on soccer's European Championship:

A flurry of second-half goals gave Italy a 3-0 win over Turkey in the opening match of the European Championship.

Ciro Immobile kicked in a rebound from close range and Lorenzo Insigne added another following a poor clearance. Both came after an own-goal from Turkey defender Merih Demiral had given Italy the lead.

The Italians dominated from the start but were denied in the first half by a superb save from Turkey goalkeeper Uğurcan Çakır and a decision by the referee not to award a penalty for an apparent handball.

The tournament began a year late because of the coronavirus pandemic and is still being called Euro 2020.

The Stadio Olimpico was only 25% full because of coronavirus measures and fans sat in small groups safely distanced from one another. The crowd of about 16,000 was still the largest gathering in Italy for a year and a half.

Wales and Switzerland play in another Group A match on Saturday in Baku, Azerbaijan.

Spain defender Diego Llorente has returned to the national team’s European Championship squad after being cleared from what officials consider to be an erroneous positive test result for COVID-19.

The Leeds player tested positive for the coronavirus on Tuesday and was isolated from the rest of the team. But four consecutive tests since then have all come back negative.

Spain is still without captain Sergio Busquets. He tested positive for the virus on Sunday and was put in isolation for at least 10 days. The team says he is feeling fine and it hopes that the Barcelona midfielder can return to playing during the tournament.

The entire squad was administered vaccines before Llorente returned.

The opening match of the coronavirus-delayed European Championship has started.

Italy and Turkey are playing their Group A match at the Stadio Olimpico in Rome.

There are about 16,000 fans in the stadium. Attendances for most matches at the 24-team tournament in 11 cities around the continent have been cut because of restrictions related to the pandemic.

Bocelli sang as the fireworks went off in the background and a female dancer attached to large helium balloons floated above the field.

The performance was followed by a virtual performance by U2 stars Bono and The Edge with DJ Martin Garrix.

The Stadio Olimpico is almost at the maximum capacity of 16,000 allowed for the opening match of the European Championship.

Most of the Turkey fans are sitting in the northern end of the stadium where Lazio supporters usually gather. Italy fans are mainly in the southern end where Roma fans generally sit.

There are also fans of both teams mixed throughout the stadium.

Finland striker Teemu Pukki says his recent ankle injury shouldn’t prevent him from playing the full game against Denmark on Saturday at the European Championship.

The status of the Norwich forward’s right ankle has been of national concern after he damaged ligaments in early May and missed the end of the season in England. He played less than 30 minutes as a substitute in Finland’s last warm-up game. The Finns lost to Estonia 1-0.

But he sounded upbeat ahead of the country’s major tournament debut in Group B in Copenhagen.

Pukki says he has been training normally for the past week “and I haven’t had any issues with the ankle.”

Finland’s hopes at the tournament rest largely on Pukki. He scored 10 goals in 10 games in qualifying.

Fans are starting to enter the Stadio Olimpico for the European Championship’s opening match between Turkey and Italy.

There seemed to be almost as many Turkey fans as Italy supporters a couple of hours before kickoff.

Fans entering the stadium are required to bring documentation showing they have been vaccinated against the coronavirus or tested negative in the 48 hours before the match or already had the disease.

Kevin De Bruyne has not traveled to St. Petersburg with the Belgium squad for Saturday’s European Championship game against Russia.

The Manchester City playmaker only linked up with the team on Monday after having a minor operation on the fractured nose and eye socket he sustained during the Champions League final against Chelsea on May 29.

Belgium coach Roberto Martinez says De Bruyne hasn’t yet trained with the group and was still following an individual program to “get him back to really being able to move freely.”

Martinez says he expects De Bruyne to join full training with the squad when Belgium’s players return to the training camp in Tubize after the group game against Russia.

Belgium’s second game is against Denmark in Copenhagen on Thursday.

Italy doesn’t allow non-essential travel from Turkey but fans from the country’s diaspora in Europe have been descending on Rome for the opening match of the European Championship.

Tukey will face Italy at the Stadio Olimpico in Group A of Euro 2020.

Metin Karagulle was cruising toward the Colosseum with a group of Turkey fans on electric scooters.

He says “we came all the way here together from Switzerland and we hope it is fair play that wins.”

Abanoz says it will be “something really big for all the Turkish people who are coming here to Rome to watch the game.”

Fans in Turkey will be able to travel to Azerbaijan for the team’s other group matches. The Turks will face Wales and Switzerland in Baku and fans with tickets will be able to attend if they have proof of a negative COVID-19 test.

Scotland’s players will take a knee at the European Championship before the game against England in London but will stand ahead of matches in Glasgow against the Czech Republic and Croatia.

The England team has been doing the anti-racism gesture since last year.

Scotland captain Andy Roberton says “we have collectively decided to again take the knee as a team for the fixture against England at Wembley Stadium.”

The match will be played on June 18.

The gesture has been booed by a section of England fans but the team will continue to take a knee at Euro 2020. England’s first game of the tournament will be on Sunday against Croatia.

Spain’s squad for the European Championship has been vaccinated against the coronavirus after two players had to be isolated following positive tests for COVID-19.

The national team says medics from Spain’s Armed Forces administered the shots at the team’s training facility near Madrid.

Spain will play Sweden in Seville on Monday in its opening Euro 2020 match. Preparations for the tournament were thrown off this week after captain Sergio Busquets and defender Diego Llorente both tested positive.

Llorente’s subsequent tests have come back negative so his initial positive result may have been erroneous. The team says he may be able to return soon.

Busquets tested positive on Sunday and is under a minimum 10-day isolation. But the team says he is feeling fine and that it hopes he will be back during the tournament.

Russia winger Andrey Mostovoy has become the first player to be cut from a team at this year's European Championship because of the coronavirus.

The team says on Twitter that “in connection with an unfavorable result of PCR testing” for the virus Mostovoy has been replaced with defender Roman Evgeniev.

The announcement comes a day before Russia plays Belgium in St. Petersburg in its opening Euro 2020 match.

Mostovoy made his debut for Russia last year and played eight of the team’s last 11 games. He has played mostly as a substitute. Evgeniev’s only appearance for his country was in a 5-0 loss to Serbia last year.

The biggest soccer tournament of the coronavirus-era is about to get started.

The first match of the European Championship will kick off at 1900 GMT in Rome when Italy plays Turkey in Group A. And there will be about 16,000 fans in the stadium.

Euro 2020 was supposed to start last year on June 12. The tournament was postponed for almost exactly one year because of the coronavirus pandemic. The final is now set for July 11 at Wembley Stadium in London.

Much of the schedule for the postponed tournament remains the same as last year but some changes in venues have been made. The 51 matches will be played in 11 cities around the continent. Rome and London will be joined by Amsterdam, Baku, Bucharest, Budapest, Copenhagen, Glasgow, Munich, Seville and St. Petersburg.