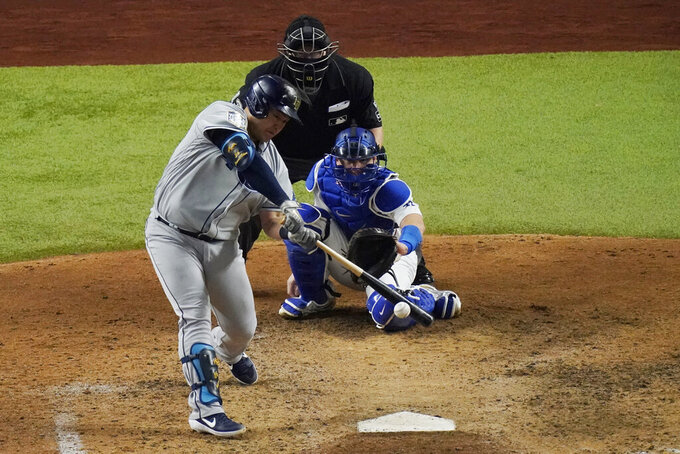 ARLINGTON, Texas (AP) — The Latest on Game 2 of the World Series (all times local):

Brandon Lowe hit two home runs to break out of an extended postseason slump and the Tampa Bay Rays held off the Los Angeles Dodgers 6-4, tying the World Series at one game apiece.

Down 5-0, the Dodgers closed within 6-4 on Corey Seager’s solo homer in the eighth. Aaron Loup relieved and struck out Cody Bellinger with a runner on base to prevent further damage.

After a day off, Game 3 will be Friday night at neutral site Globe Life Field, home of the Texas Rangers. Charlie Morton starts for the Rays against Walker Buehler in a matchup of pitchers who have both excelled in October outings.

Corey Seager hit a leadoff drive in the eighth inning for his seventh homer this postseason, and the Los Angeles Dodgers trimmed Tampa Bay’s lead to 6-4 heading to the ninth in Game 2 of the World Series.

Tampa Bay is looking to even the Fall Classic after Los Angeles won 8-3 in the opener. Brandon Lowe homered twice in Game 2, and Wendle had three RBIs heading into the ninth.

Now a battle of the bullpens, the Rays are firmly in control of Game 2 and lead Los Angeles 6-3 after seven innings.

Alex Wood, the Dodgers’ sixth pitcher, allowed a long single to Yandy Díaz and intentionally walked Randy Arozarena in the top of the seventh, but he stranded them both by striking out pinch-hitter Mike Brosseau.

Wood was pitching for the first time in a week. He and Dylan Floro are the only Los Angeles pitchers who haven’t been charged with at least one run in Game 2.

The Rays turned to righty Pete Fairbanks, the hardest thrower in their vaunted bullpen. He retired the side on six pitches, including a pop-up of Mookie Betts to end the inning.

Joey Wendle added a sacrifice fly to his two-run double to help the Tampa Bay Rays take a 6-3 lead over the Los Angeles Dodgers into the seventh inning.

Will Smith hit a solo homer for the Dodgers in the bottom of the sixth, cutting their deficit to three. Smith connected off reliever Nick Anderson, who gave up only one home run in the regular season while compiling a 0.55 ERA.

A fan in the left-field stands caught Smith’s home run on the fly, then tossed his glove in excitement onto the field near Rays left fielder Randy Arozarena. When cameras focused in on the fan again, he had his glove back and was showing off the ball.

Wendle, who began the night batting .227 in the postseason with two RBIs and a paltry .542 OPS, had a two-run double in the fourth and a sac fly in the sixth. Ji-Man Choi opened the inning with a single off Joe Kelly and went to third on Manuel Margot’s single to left field.

Rays manager Kevin Cash and a trainer checked on Margot at first base for a possible injury, but Margot said he was fine and stayed in the game. Wendle followed with a well-struck drive to left-center that was caught by Chris Taylor.

Kelly got two strikeouts with a runner on second to keep it 6-2.

Brandon Lowe has broken out of his slump with two homers and three RBIs for the Rays, who are trying to tie the best-of-seven Series at one game apiece.

Brandon Lowe homered twice and Joey Wendle had a key two-run double, helping the Tampa Bay Rays to a 5-2 lead over the Los Angeles Dodgers heading into the sixth inning of Game 2 of the World Series.

Tampa Bay ace Blake Snell was working on a shutout before Chris Taylor belted a two-run homer with two outs in the fifth for the Dodgers’ first hit. Mookie Betts then walked and Corey Seager singled before Snell was pulled by manager Kevin Cash.

Nick Anderson came in and escaped the threat, fanning Justin Turner for the final out.

Showing off a dazzling slider, Snell struck out nine and walked four.

Lowe hit a solo homer off rookie Tony Gonsolin in the first. He also connected for a two-run shot in the fifth, sending a drive to left against Dustin May that bounced off the top of the wall and over.

May also surrendered Wendle’s double in the fourth that drove in Ji-Man Choi and Manuel Margot for a 3-0 lead.

The 2018 AL Cy Young Award winner hasn’t allowed a hit and has eight strikeouts, including punchouts of Max Muncy and Will Smith during a 1-2-3 fourth. Snell has only thrown 63 pitches and could pitch deep into the game after being pulled in the fifth inning of his previous start in the AL Championship Series -- an aggressive hook by manager Kevin Cash that left Snell disgruntled. The left-hander hasn’t completed six innings in a game since July 21, 2019.

Los Angeles has used four pitchers through four innings, most by a team in a World Series game since 1990, when Oakland used four to that point in Game 3. Dodgers manager Dave Roberts has made a trio of mid-inning pitching changes.

Joey Wendle lined a two-run double to the wall in right-center off LA right-hander Dustin May in the top of the inning, scoring Ji-Man Choi and Manuel Margot. Choi reached after second baseman Kiké Hernández bobbled his potential double play ball, which might have gotten left-hander Victor González out of the inning. Instead, May relieved, allowed a single to Margot and Wendle’s double.

Blake Snell has struck out six through three hitless innings and the Tampa Bay Rays have a 1-0 lead over the Los Angeles Dodgers on a homer by slumping Brandon Lowe in the first.

Snell’s fastball looks crisp and his off-speed stuff is sharp. The 2018 AL Cy Young Award winner worked around two walks in the second and has thrown 42 pitches. He struck out Chris Taylor and NLCS MVP Corey Seager in the third, sandwiched around a routine groundout by Mookie Betts.

The NL champion Dodgers have used three pitchers already in a bullpen game: Tony Gonsolin, Dylan Floro and left-hander Víctor González, who entered with two outs in the top of a 1-2-3 third and needed only one pitch to retire Austin Meadows on a popup that Seager ran down from his shortstop spot.

Los Angeles manager Dave Roberts has already gone to his bullpen in the second inning of Game 2 of the World Series.

Rookie starter Tony Gonsolin didn’t figure to last long in a bullpen game for the Dodgers, and the 26-year-old right-hander was replaced by righty Dylan Floro after Manuel Margot led off with a walk, stole second and went to third on Joey Wendle’s flyout to center.

Gonsolin’s outing was the shortest in the World Series since San Francisco’s Jake Peavy allowed five runs in 1 1/3 innings of a 10-0 loss to Kansas City in Game 6 in 2014.

Floro kept the Rays from adding to their 1-0 lead. Margot was thrown out at home trying to score on Willy Adames’ sharp grounder to shortstop Corey Seager, who was playing in and easily beat Margot with the throw.

Adames tried to steal with two outs and was initially called safe by second base umpire Marvin Hudson. The call was overturned on review, drawing a roar from the pandemic-reduced, pro-Dodgers crowd and ending the inning. The replay showed Seager’s glove corralling Will Smith’s one-hop throw and tagging Adames’ left shoulder just before his left hand touched the bag.

Rays ace Blake Snell walked two of the first three hitters in the second inning after the lefty cruised in a 10-pitch first. But AJ Pollock popped out, and Kiké Hernández struck out.

Brandon Lowe hit a home run in the first inning to give the Tampa Bay Rays a 1-0 lead, the first time they have been ahead in this World Series.

There was a lot of Dodger blue among the roughly 11,000 fans, the maximum being allowed in Globe Life Field because of COVID-19.

Chants of “Let’s Go Dodgers!” broke out in the top of the first, but those quieted significantly when Lowe — batting .107 this postseason — went the opposite way to left-center for his one-out homer that made it 1-0.

After that, the smaller group of Rays fans in attendance could be heard chanting “Ji-Man Choi!” when their first baseman came up before striking out to end the inning against LA rookie right-hander Tony Gonsolin.

The Los Angeles Dodgers try to take a 2-0 World Series lead against the Tampa Bay Rays.

Forty-five of the 56 teams winning the first two games went on to the title, including 18 of the last 19. The exception was the 1996 Atlanta Braves, who won the first two game at Yankee Stadium, then lost four in a row.

Not wanting to use ace Walker Buehler after a seven-game NL Championship Series that had games on seven straight days, the Dodgers started reliever Tony Gonsolin, who threw 41 pitches over two innings in Sunday night’s 4-3 win over the Braves in Game 7.

The Rays added two left-handed batters to their starting lineup, raising their total to five: Austin Meadows at the designated hitter leading off and first baseman Ji-Man Choi as the cleaup hitter.

Kiké Hernández started at second base for the Dodgers after entering the opening 8-3 win as a pinch-hitter. Chris Taylor shifted from second base to left field, Will Smith moved from DH to catcher in place of Austin Barnes and AJ Pollock was the DH.

The Los Angeles Dodgers have certainly settled into the new ballpark deep in the heart of Texas.

Game 2 of the World Series will be the Dodgers’ 15th game at the $1.2 billion Globe Life Field. That is already half as many as the 30 games the Texas Rangers have played in their new home, which opened during the pandemic-shortened season.

Dodgers manager Dave Roberts said before Wednesday night’s game that all the experience there has made it feel more like a home field and is definitely an advantage.

Los Angeles, which had the best record in the majors during the regular season, has been in the home clubhouse and home dugout for more than two weeks. That run began with a three-game sweep of San Diego in the National League Division Series, then a seven-game National League Championship Series win over Atlanta before facing Tampa Bay in the World Series

The Dodgers were on the other side for a three-game series during the regular season in late August against the Rangers.

Austin Meadows is leading off as the designated hitter for Tampa Bay and first baseman Ji-Man Choi is in the cleanup spot for the Rays in Game 2 of the World Series against the Los Angeles Dodgers.

With rookie right-hander Tony Gonsolin on the mound for the Dodgers on Wednesday night, the left-handed hitters Meadows and Choi were in the lineup after not starting the series opener against lefty Clayton Kershaw. The Rays had five left-handers in the batting order.

Kiké Hernández, who entered Tuesday’s 8-3 Dodgers win as a pinch-hitter after Glasnow was out of the game, is getting the Game 2 start at second base. Chris Taylor moves to left field, with AJ Pollock the DH and Will Smith the catcher after being the DH in Game 1.