The Latest: Masters 1st round halted with 44 on the course 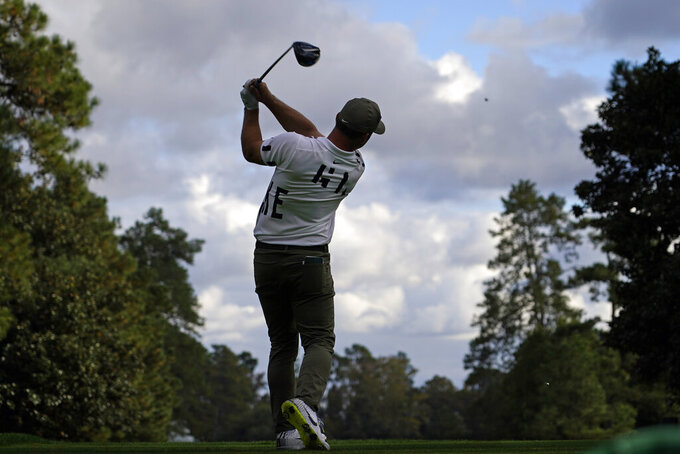 Paul Casey, of England, tees off on the ninth hole during the first round of the Masters golf tournament Thursday, Nov. 12, 2020, in Augusta, Ga. (AP Photo/Charlie Riedel)

Play has stopped for the day at the Masters, with Paul Casey in the lead and almost half the field unable to complete the first round because of a three-hour weather delay in the morning.

Casey shot a 7-under 65 and sat two strokes ahead of Webb Simpson, Xander Schauffele. Justin Thomas also was 5 under, but he only completed 10 holes. Defending champion Tiger Woods shot 68.

Play stopped after only about a half hour Thursday morning when lighting was spotted in the area. With the delay, 44 players will return Friday morning to complete the first 18 holes.

Tiger Woods has always been a notoriously slow starter at Augusta National, even while winning five green jackets. Not this year.

The defending champion shot a bogey-free, 4-under 68 in the opening round of the Masters, leaving him three shots off the lead and very much in contention for a record-tying sixth title.

It was a big surprise, considering the lackluster form Woods had shown coming into this pandemic-delayed tournament.

Then again, Woods usually plays well at Augusta no matter the circumstances. Nineteen months ago, he rallied on the final day to win his 15th major title.

“It’s just experience. It’s just understanding how to play this golf course,” Woods said. “I have a sense of ease when I come here.”

It’s the first time Woods has played the opening round at Augusta without a bogey, and only the second time he has started the tournament by breaking 70. He matched a 68 in the opening round of the 2010 Masters.

Also, it’s the first bogey-free round for Woods in a major since the 2009 PGA Championship at Hazeltine.

“I drove it well, I hit my irons well and I putted well,” Woods said. “I did everything well today.”

What a difference a year — well, actually 19 months — makes for Paul Casey.

The 43-year-old Englishman is leading the Masters after shooting a 7-under 65 in the opening round.

In 2019, Casey shot 81 and 73 to badly miss the cut. But he turned things around in his return to Augusta National, which was delayed for seven months by the coronavirus pandemic.

Starting on the back side, Casey made five birdies and rolled in an eagle at the par-5 second hole to match his lowest score ever at the Masters. He headed into the clubhouse with a two-shot lead over Webb Simpson and Xander Schauffele.

Casey has never won a major title, but he's usually part of the mix at Augusta. He's had five top-10 finishes, with his best showing being a tie for fourth in 2016.

“I've not played particularly great golf since the whole pandemic hit,” Casey said. "I put in a lot of hard work in a short amount of time and it paid off today with the score I shot.”

“There is a vibe that Augusta National has,” he said. “The aura — there's something you can't measure that just adds to the excitement.”

Larry Mize got into red numbers early. More surprising is a late string of birdies that gave him a 2-under 70.

Not bad for a 62-year-old former champion. It was the first time in 11 years that Mize broke par at Augusta National. He shot 67 in 2009 and tied for 30th that year.

His performance Thursday was indication of how the downpour that halted play for nearly three hours in the morning has left Augusta National soft and vulnerable to low scoring.

Paul Casey was 7 under with two holes remaining. Webb Simpson opened with a 5-under 67, while Hideki Matsuyama finished with a 68.

Tiger Woods is off to a strong start in defense of his Masters championship.

Starting on the back nine, Woods birdied both par 5s and added another on the par-3 16th to make the turn with a 3-under 33.

He made another birdie at No. 1, dropping his score to 4 under. He is two strokes behind leader Paul Casey in a storm-delayed opening round.

Woods has been a notoriously slow starter at Augusta National, even while winning five green jackets. He has broken 70 only once in the opening round, shooting 68 in 2010.

Two-time Masters runner-up Lee Westwood made the turn in the first round at 5 under and tied for the lead.

The 47-year-old Englishman had five birdies on the front nine, dropping strokes on Nos. 8 and 9 to move to the top of the leaderboard. Webb Simpson, who started on the back nine, joined him there moments later when he followed a birdie at No. 1 with an eagle on the second hole.

Westwood is looking for his first major title. He has six top-10 finishes at Augusta National, including a second-place finish in 2010 and a tie for second in 2016.

Simpson won the U.S. Open in 2012. His best finish in the Masters was fifth, last year.

Bryson DeChambeau spoke just a bit too soon about the Masters.

The U.S. Open champion raised eyebrows this week when he said he thinks of the historic Augusta National course as a par 67. Par is actually 72, but because of his strength DeChambeau can reach the par 5s in two strokes and drive the green on some of the par 4s.

DeChambeau wound up in the pine straw, behind a tree to the right of the fairway, with his drive. Then he put his second shot into the bushes to the left of the green. After hitting a provisional ball into Rae’s Creek, he took a drop on the original ball for a penalty, then duffed the next shot. He finally reached the green in five but two-putted for a double-bogey 7.

Sixty-two-year-old Larry Mize is co-leading the Masters very early into the opening round.

Mize is in front at 2-under par through four holes at Augusta National. The 1987 champion started the day with a bogey on the first hole, then birdied the next three.

The pandemic-delayed tournament teed off at 7 a.m. and was promptly shut down for about three hours when lightning was spotted in the area. A handful of morning groups have yet to tee off, along with the entire afternoon portion of the field.

Play has resumed at Augusta National after a delay of nearly three hours because of rain and lightning in the area.

Only a handful of players managed to tee off for the opening round before an approaching storm prompted an evacuation of the course. No one completed more than one hole.

Because of the move to November and the tight window of daylight hours, play began off both sets of tees.

After such a lengthy delay, it seems unlikely that the entire first round will be completed Thursday.

Fortunately, the forecast for the rest of the weekend is much more promising: sunny skies with temperatures in the 70s.

Jack Nicklaus says he is done talking about his endorsement of President Donald Trump.

The six-time Masters champion posted a message of support for the Republican candidate on social media shortly before the election. He also said he had already voted for Trump, who wound up losing the Nov. 3 election to former Vice President Joe Biden.

Nicklaus was at Augusta National on Thursday to open the Masters with a ceremonial tee shot alongside fellow Hall of Famer Gary Player.

Asked about his endorsement of Trump, Nicklaus said, “I think I’ve said enough about that. I don’t think this is a place for politics.”

Turns out there is some normalcy to this Masters: Rain.

About a half-hour after Jack Nicklaus and Gary Player hit honorary tee shots before the smallest crowd ever, a rumble could be heard from Amen Corner. It wasn't a roar, but an approaching storm. The course was evacuated because of lightning in the area at about 7:35 a.m.

Because of the move to November and the tight window of daylight hours, play began off both sets of tees.

And with no spectators, only about 500 people — Augusta National members and family, a few wives of players, media and tournament officials — gathered around the first tee to watch Nicklaus and Player hit their drives. Nicklaus had his wife, Barbara, dressed in the white coveralls for caddies.

Most jarring was the sound of a drone — a first for the Masters. Club Chairman Fred Ridley said two drones would be used for the week.

Also peculiar was 1988 champion Sandy Lyle wearing suspenders. And when he hit his tee shot off the 10th for the earliest start and with fog clinging to the fairways, Lyle turned and said, “Where did it go?”

Nine players have completed one hole. No one made birdie. Chinese amateur Yuxin Lin made double bogey on No. 10.