The Latest: Minnesotan charged with attacks over mask demand 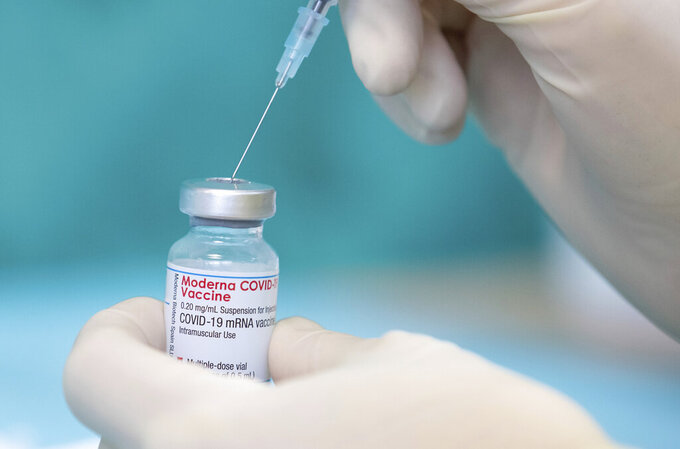 A nurse draws up the vaccine of the manufacturer Moderna against the coronavirus with a syringe in a posed situation a the vaccination centre in Bielefeld, Germany, Friday, April 16, 2021. (Friso Gentsch/dpa via AP)

After a slow-speed chase, officers surrounded his truck with their squad cars, but he refused to get out. Officer Steven Sickmann got up on the truck’s running board and reached through the window. The complaint says Oeltjenbruns closed the window on the officer's arm, trapping him, and drove off, crashing into squad cars.

— Clammers keep digging through the pandemic, but find fewer shellfish

— Rule to extend mask mandate angers many in Oregon

ISLAMABAD — Authorities in Pakistan have decided to start vaccinating people aged 50 to 59 next week, hours after the country reported over 100 fatalities in a single day for the fifth consecutive day.

Saturday’s figures bring Pakistan’s death toll from the pandemic to 16,094, out of more than 750,000 total confirmed cases in the country of some 233 million people.

Pakistan has largely relied on donated or imported Chinese vaccines, which had been offered only to health workers and elderly people. But they have not responded in overwhelming numbers to the vaccination campaign, prompting officials to offer the vaccines to a younger cohort.

Pakistan hopes to receive 15 million COVID-19 vaccine doses through the UN-backed COVAX program by next month.

LAS CRUCES, N.M. -- A high school in New Mexico has returned to remote learning as the school district investigates an off-campus “secret prom.”

Officials said Friday that the event in Las Cruces violated state mandates intended to curb the spread of the coronavirus.

A school district statement said a complaint submitted to the governor’s office alleged that hundreds of Mayfield High School students may have attended the unsanctioned prom held April 10. A district spokeswoman said students who attended could face repercussions ranging from academic suspensions to being barred from attending school events such as graduation.

The district said Mayfield would be on remote learning through April 26.

ALBUQUERQUE, N.M. -- The number of new COVID-19 cases is ticking up again in New Mexico as the death toll reaches another milestone.

State health officials reported Friday that four more people have succumbed to the virus, pushing the total to 4,001 since the pandemic began last year.

While the death rate has declined dramatically since peaking in December, state officials continue to push for people to get vaccinated, saying doing so will lessen the chances of severe illness or death.

With 1,550 confirmed cases being reported over the past week, the seven-day average for new daily cases remains above the state’s target.