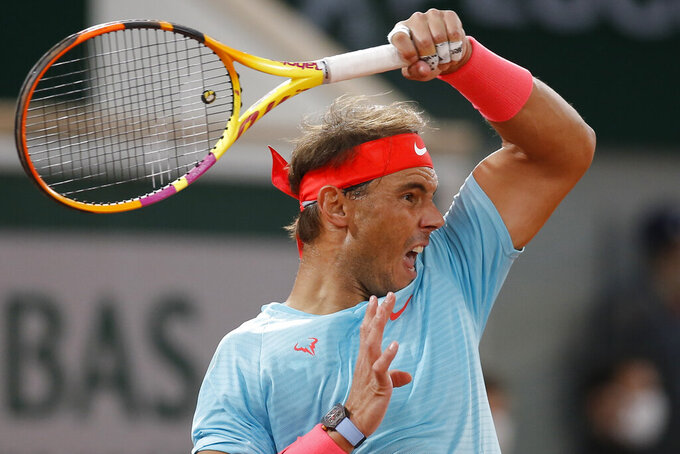 Nadal’s 6-0, 6-2, 7-5 victory over Novak Djokovic in the French Open final was also Nadal's 100th career match win at Roland Garros. The Spaniard improved to 100-2 at the tournament.

Nadal didn’t drop a set in this year's tournament. He served an ace on his first championship point.

It was Djokovic’s second loss this year. His only other defeat in 2020 came when he was defaulted from the U.S. Open last month for inadvertently hitting a line judge in the throat with a ball he smacked in anger during a fourth-round match against Pablo Carreño Busta.

Rafael Nadal leads Novak Djokovic 6-0, 6-2 in the French Open final and is one set away from a record-extending 13th title at Roland Garros.

Djokovic saved three break points before holding his serve in the opening game of the second set to finally get on the board.

Nadal then broke twice for a 4-1 lead in the second and held from there.

Nadal has not dropped a set in the tournament.

Rafael Nadal won the first 6-0 against Novak Djokovic in the French Open final.

Nadal saved three break points at 3-0 and served an ace on his first set point.

The French Open final between Rafael Nadal and Novak Djokovic is underway with the retractable roof closed on Court Philippe Chatrier.

It began to rain shortly before the match started.

Nadal is seeking a record-extending 13th trophy at Roland Garros and can match Roger Federer with his 20th Grand Slam title.

It’s the 56th meeting between Nadal and Djokovic. That’s the most meetings between two men in the sport’s professional era. Djokovic leads 29-26 overall. Nadal leads 6-1 at Roland Garros.

It is Babos and Mladenovic's fourth Grand Slam doubles title together. As well as winning at Roland Garros last year, they have also won twice at the Australian Open, in 2018 and 2020.

As well as four titles won with Babos, Mladenovic also won in the doubles at Roland Garros in 2016 with French countrywoman Caroline Garcia.

Regardless of whether Rafael Nadal beats Novak Djokovic in Sunday's final to win a 13th French Open, the tournament director believes that the record of 12 titles already held by the Spaniard will never be equalled.

Guy Forget said Nadal's record of 12 finals played, 12 finals won at Roland Garros before playing Djokovic “is beyond comprehension” and “the biggest achievement, sporting achievement, (that) any sport will ever see.”

“To win it 12 times, I don't know, and possibly a 13th time, I don't think that record will ever be beaten again,” Forget said.

“It's just beyond anything that anyone could have imagined, you know, 10 years ago.”

Roland Garros organizers say they've not made a profit from this year's pandemic-hit edition of the French Open that was pushed back from spring to autumn, deprived of 97% of its ticket sales and most of its spectators and is wrapping Sunday with the men's final of Novak Djokovic vs. Rafael Nadal.

As for next year, organizers are still planning to restore the Grand Slam clay-court tournament to its usual May-June slot but admit they have no visibility on whether the pandemic will allow that to happen.

“We have no crystal ball,” said Bernard Giudicelli, the French tennis federation president. "We are advancing into the unknown.”

Organizers said that staging this year's September-October edition in the midst of the pandemic, with only 1,000 spectators allowed per day and just 3% of the usual amount of tickets sold, caused a hit of 80 million to 100 million euros ($95 million to $118 million) to the tournament's revenues and left it earning about what it cost to hold.

Giudicelli insisted that holding the tournament in such conditions was still a “winning” choice and that it would have been “unthinkable” for 2020 to have passed without a French Open.