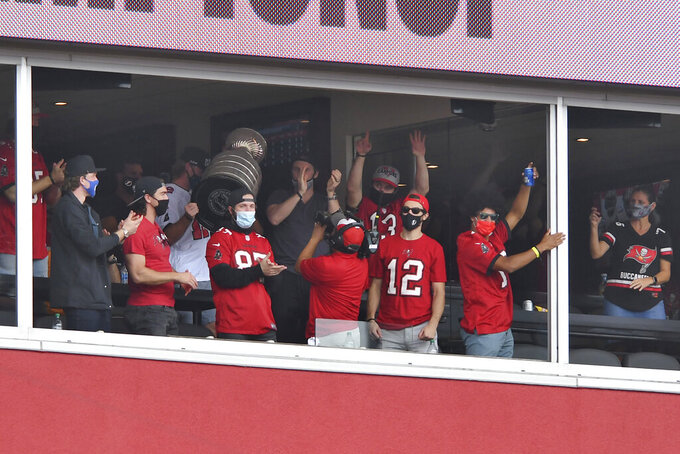 Members of the Tampa Bay Lightning NHL hockey team hold up the Stanley Cup during the first half of an NFL football game between the Tampa Bay Buccaneers and the Los Angeles Chargers Sunday, Oct. 4, 2020, in Tampa, Fla. The Lightning defeated the Dallas Stars earlier this week to win the cup. (AP Photo/Jason Behnken)

Finally there’s been a game dominated by defense this weekend but it was also marred by a post-game fight.

After the first nine games of the NFL’s Week 4 slate averaged 61.2 points, the Los Angeles Rams grinded out a 17-9 victory over the New York Giants in a game marred by the fight at midfield afterward between Rams cornerback Jalen Ramsey and Giants receiver Golden Tate.

Jared Goff hit Cooper Kupp for a 55-yard touchdown with about seven minutes left to play.

Ramsey and Tate scuffled at midfield after the final whistle after a game filled with trash-talking between the two Nashville-area natives.

Ramsey has two young children with Tate’s sister, and Tate was publicly upset last year when the couple went through a nasty public breakup.

Bills quarterback Josh Allen’s 1-yard sneak that gave Buffalo a 23-16 lead over Las Vegas early in the fourth quarter. It was his third TD of the day.

That sneak marks Allen’s third rushing touchdown of the season and 15th overall.

Only Peyton Manning and Russell Wilson have ever tallied more through four games.

Manning had 16 TDs in the first month in 2013 while directing the Denver Broncos' record-breaking offense and Wilson tied the mark earlier Sunday with a pair of touchdown throws in Seattle’s 31-23 victory over the Dolphins.

Buffalo Bills quarterback Josh Allen is back guiding the Bills offense after injuring his left shoulder late in the first half at Las Vegas.

Allen was hurt when he scrambled and got off an awkward pass before landing on his left hand.

Allen was taken into the locker room after a tackle and returned to the bench, where he threw some passes along the sideline during he 2-minute commercial break.

After Derek Carr threw his 150th touchdown pass, tying the Raiders’ franchise record, Allen returned to the field with 13 seconds left but only to take a kneel-down before the Bills trotted off with a 17-13 halftime lead.

Allen’s two first-half touchdown passes gives him 13 so far this season, surpassing Ryan Fitzpatrick (12) for most total TDs by a Bills QB in the team’s first four games.

Bills cornerback Josh Norman has made his debut with Buffalo in taking over after starter Levi Wallace hurt his left ankle in the first quarter at Las Vegas.

Norman missed the first three weeks of the season with a left hamstring injury before being activated off injured reserve on Saturday. The Bills signed the ninth-year player in free agency in March after he was cut by Washington.

Buffalo Bills quarterback Josh Allen headed to the locker room after falling on his left wrist. He came back to the bench after a few minutes.

Allen was injured in the second quarter of Buffalo's game at Las Vegas. The Bills lead the Raiders 17-6.

Allen is off to a terrific start for the unbeaten Bills this season and he's 15 of 20 for 152 yards and two touchdowns Sunday.

The Rams are allowing Joe Judge’s winless New York Giants to hang around at SoFi Stadium.

Los Angeles led 10-6 at halftime even though New York managed just 67 yards of offense in the first half. A fumble by Rams tight end Gerald Everett set up the Giants’ first field goal, and they added another at the halftime gun after the Rams allowed a 13-play, 56-yard drive by an offense that managed just 11 total yards before that.

The Rams have four sacks, but they’ve made three straight drives without a touchdown. Jared Goff is 13 of 16, but none of his completions went longer than 17 yards.

The Rams got off to a strong start against the struggling Giants, but a turnover is keeping New York in the game.

Los Angeles led the Giants 7-0 after a first quarter dominated by a 12-play, 65-yard drive by the Rams culminating in tight end Gerald Everett’s first career rushing touchdown. The Rams’ offense didn’t have a negative-yardage play in the quarter, while the LA defense pushed the Giants back minus-2 net yards on their first two drives.

But Everett fumbled after a reception on the opening play of Los Angeles’ next drive, and the Giants cashed in for a field goal 9 seconds into the second quarter.

The high-scoring start to the 2020 NFL season continued Sunday with several games featuring lots of points and very little defense.

The Broncos kicked off Week 4 with a 37-28 win over the Jets. Sunday’s games included the Browns outlasting the Cowboys 49-38 and the Buccaneers beating the Chargers 38-31.

None of the weekend’s games has featured fewer than 48 combined points, and that was the Ravens’ 31-17 win over Washington.

And the Seahawks beat the Dolphins 31-23 to become the first 4-0 team this season.

The Seattle Seahawks are the NFL’s first four-win team. They defeated the Miami Dolphins 31-23 Sunday.

The Bears and Bills can join the Seahawks. They're playing late games Sunday. The Bills are at Las Vegas and the Bears are hosting Indianapolis.

Seven teams brought a 3-0 record into Week 4 but three of them saw their games postponed over coronavirus infections.

The Tennessee Titans were supposed to play the Pittsburgh Steelers in a matchup of unbeatens but the Titans’ COVID-19 outbreak that now stands at 20 positive cases forced the NFL to push back that game until Oct. 25.

Cam Newton’s virus infection and another by a Kansas City practice squad quarterback forced the league to delay the Patriots-Chiefs game to Monday night. The Chiefs are 3-0.

The Stanley Cup is taking in the action at the Chargers-Buccaneers game in Tampa. Several members of the NHL champion Tampa Bay Lightning, including captain Steven Stamkos, defenseman Ryan McDonagh and goaltender Andrei Vasilevskiy are attending the game in a suite at Raymond James Stadium.

Another double-digit lead has quickly evaporated for the Detroit Lions.

Drew Brees guided New Orleans to four unanswered touchdowns, and the Saints took a 28-14 lead into halftime after spotting Detroit an early 14-0 lead.

The Lions lost their first two games this season, blowing double-digit advantages against Chicago and Green Bay, but they were coming off a road win against Arizona prior to this game against the injury-riddled Saints.

The Saints’ 21-0 spurt wasn’t even the best second quarter in Week 4. The Cleveland Browns used a 24-0 second-quarter outburst to take a 31-14 halftime lead at Dallas.

Minnesota safety Harrison Smith has been ejected from the Vikings' game at Houston.

Jordan Akins grabbed a 26-yard reception late in the second quarter and was being tackled by Eric Kendricks when Smith made a flying helmet-to-helmet hit on Akins.

Akins dropped to the ground and put both of his hands to his head before slowly getting up and walking off the field. He left the game with a concussion.

Smith was assessed a personal foul for leading with his helmet on the tackle and was ejected from the game.

Cam Newton says he’ll use his time off from football while battling the coronavirus to quote -- “get healthy and self reflect on the other amazing things that I should be grateful for.”

Those infections prompted the NFL to push the Patriots-Chiefs game back a day to Monday night.

Landry’s 37-yard scoring toss to Odell Beckham Jr. on a trick play opened the scoring against the Dallas Cowboys.

The seventh-year player has played all 100 games in his career. Landry came into the game leading the Browns with 12 catches. Now he leads them in passing touchdowns by a receiver.

The 37-yard TD toss was the longest by a receiver since Beckham’s 49-yarder to Russell Shepard with the New York Giants almost two years ago.

Cleveland running back Nick Chubb has left the game against Dallas with a right knee injury after his leg was rolled up on by a pair of opposing linemen engaged on a pass rush in the backfield.

Chubb stayed down briefly before limping off the field on his own. He went to the locker room, and his return was listed as questionable.

Before the injury, Chubb had 43 yards on just six carries, pushing him past 300 yards for the season. He entered the game as the NFL’s fourth-leading rusher.

Elsewhere, Chargers tight end Austin Ekeler injured his left hamstring against the Buccaneers, who got a scare when wide receiver Mike Evans was taken to the locker room for an apparent right foot injury. Evans returned the next series.

Brandon McManus suddenly has some Super Bowl 50 company in Denver.

But the injury-riddled Broncos this weekend signed free agent defensive linemen Sylvester Williams and Darius Kilgo to their practice squad this weekend.

Williams was the Broncos first-round pick in 2013.

The Broncos have made use of their practice squad, calling up players every week so far. and coach Vic Fangio said the newcomers will get to play as Denver tries to navigate a rash of injuries.

After beating the Jets37-28 on Thursday night, the Broncos face the Patriots next week.

Some NFL teams are continuing to skip the national anthem altogether while other teams have a spattering of players kneeling during the “Star-Spangled Banner.”

In Charlotte, Panthers quarterback Teddy Bridgewater and a handful of other Carolina players knelt during the national anthem, while the Arizona Cardinals remained in the locker room.

Seven Seahawks sat and four knelt during the national anthem in Miami. The Dolphins stayed in their locker room.

In Detroit, about a dozen Lions were in the tunnel while quarterback Matthew Stafford and several other teammates took a knee at their goalline as the New Orleans Saints stood on their sideline.

There’s been a big uptick in players protesting social injustices this season following a summer of unrest across the globe that was sparked by the death of George Floyd while in police custody in Minneapolis.

The NFL will have a rare Monday night double-header after moving this weekend’s marquee matchup back a day over coronavirus concerns.

New England and Kansas City were scheduled to square off today. But Patriots quarterback Cam Newton and Chiefs practice squad quarterback Jordan Ta’amu were added to the COVID-19 reserve list this weekend.

Further testing showed none of their teammates were infected with the virus.

So, Monday night the Patriots’ game at Kansas City airing on CBS will start at 7:05. The original Monday night game pitting Atlanta and Green Bay is bumped back 45 minutes and will now kick off at 8:50 on ESPN.

An outbreak of COVID-19 on the Tennessee Titans earlier forced the NFL to postpone the today’s Titans-Steelers game to Oct. 25.