The Latest: UK health secretary quits in wake of scandal 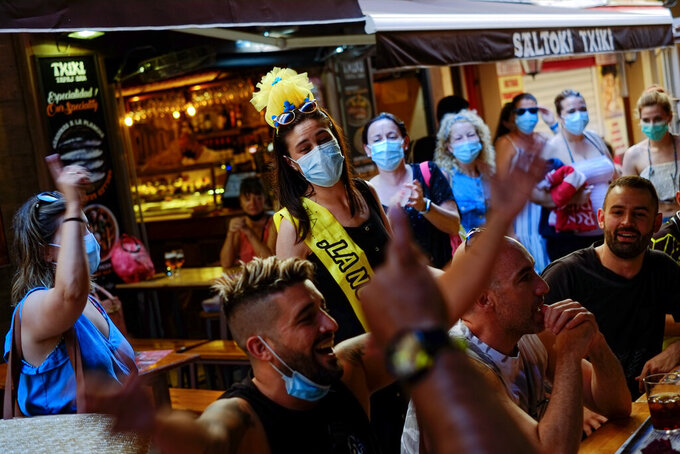 People enjoy a summer's day, in Benidorm, south-east Spain, Saturday, June 26, 2021. Almost a year after face masks became mandatory indoors and outdoors in Spain, people from Saturday are no longer required to wear them outside as long as they can stay at least 1.5 meters (5 feet) apart. (AP Photo/Alvaro Barrientos)

LONDON — U.K. Health Secretary Matt Hancock has resigned after breaking social distancing rules with an aide he was allegedly having an affair with.

The tabloid Sun newspaper had run images appearing to show the married Hancock and senior aide Gina Coladangelo kissing in an office at the Department of Health.

Hancock said in his letter of resignation to Prime Minister Boris Johnson that the government owes “it to people who have sacrificed so much in this pandemic to be honest when we have let them down.”

The Sun late Friday also published a video of the embrace, which had prompted the main opposition Labour Party to deem his position “hopelessly untenable.” Some Conservative lawmakers had also called on Hancock to quit because he wasn’t practicing what he has been preaching during the pandemic.

“The last thing I would want is for my private life to distract attention from the single-minded focus that is leading us out of this crisis,” Hancock said in his letter of resignation.

“I want to reiterate my apology for breaking the guidance, and apologize to my family and loved ones for putting them through this,” he said. “I also need (to) be with my children at this time.”

— As virus surges in Uganda, hospitals accused of profiteering

WASHINGTON -- Product information about the Moderna and Pfizer-BioNTech vaccines now warns about the increased risk for heart inflammation, a rare side effect of the shots.

Government health officials say, however, that the benefits of the vaccines against COVID-19 outweigh the risk posed by the side effect, which appears most common among people under 30.

The Food and Drug Administration said the risk particularly follows the second dose of the COVID-19 vaccines, and symptoms usually appear within a few days of vaccination. The fact sheets say people should seek immediate medical care if they have chest pain, shortness of breath, or a fast, fluttering or pounding heart after vaccination.

The FDA noted the change in fact sheets for patients and health care providers in a website post dated Friday. The action followed discussion of the issue Wednesday by a committee that advises the Centers for Disease Control and Prevention on vaccinations.

After that meeting, top government health officials and medical organizations issued an unusual joint statement saying that the side effect is “extremely rare” and usually mild in young people, and that many recover on their own or with minimal treatment.

LONDON — The U.K. has recorded its most new coronavirus infections since early February even as the National Health Service ran a “grab a jab” initiative to further drive up vaccination rates.

Government figures Saturday showed that another 18,270 people tested positive for the virus across the U.K, the highest daily number since Feb. 5.

Nearly 100,000 people have tested positive over the past week. That’s a near 50% increase compared to the week before and that’s raised questions over whether lockdown restrictions will end as planned.

The latest spike came as hundreds of walk-in vaccination sites including at stadiums and shopping centers opened in England over the weekend. It’s a bid to boost vaccine numbers particularly among younger age groups.

Customers at the City Winery’s flagship restaurant in New York must show proof of a COVID-19 vaccination to get in. But that’s not required at most other dining establishments in the city. And it’s not necessary at other City Winery sites around the U.S. Company CEO Michael Dorf says customers there wouldn’t accept it.

Many businesses across the U.S. have been reluctant to demand proof of vaccination from customers. And the public and the politicians in many places have made it clear they don’t care for the idea.

The Centers for Disease Control and Prevention still recommends masks when dining or gathering indoors for those who aren’t fully vaccinated. But few states require it, and most businesses rely on voluntary compliance — even in places with low vaccination rates where COVID-19 cases are climbing.

MOSCOW — Russia has reported its highest daily COVID-19 death toll of the year as the country grapples with a sharp spike in infections that has brought new restrictions in some regions.

The national coronavirus task force said Saturday that 619 people died over the past day, the most since Dec. 24. There were were 21,665 new infection cases, nearly 1,300 more than on the previous day and more than double the 9,500 reported on June 1.

More than a third of the new infections were in Moscow. The city on Monday is to begin a system under which restaurant service will be limited to people who can show they’ve been vaccinated or had a recent negative coronavirus test.

Eighteen regions made vaccinations mandatory this month for employees in certain sectors.

And concern is growing over the alleged exploitation of patients by private hospitals accused of demanding payment up front and hiking fees.

Uganda is among African countries seeing a dramatic rise in the number of infections amid a severe vaccine shortage. The country has vaccinated under 1% of its 44 million people.

One observer says that without a national health insurance scheme, COVID-19 has highlighted that health care in Uganda is “commoditized, available to the highest bidder.”

HELSINKI — Finnish health authorities have detected a spike in coronavirus cases that has been traced to soccer fans returning from neighboring Russia following European Championship matches in St. Petersburg.

The Finnish Institute for Health and Welfare has urged “all passengers who have traveled from St. Petersburg to Finland by any bus company to apply for a coronavirus test.” Finland played two of its Euro 2020 group games in St. Petersburg.

At least 2,000 Finns are estimated to have traveled to the city for those matches. The Finnish health institute’s director says more than 120 virus cases have so far been detected from passengers returning from St. Petersburg.

MEXICO CITY — Mexico says it will reopen two temporary wards to handle a resurgence of COVID-19 cases after months of closing temporary hospital spaces as the coronavirus pandemic receded.

The two temporary 30- and 40-bed wards will be opened in covered areas in parking lots of hospitals in the state of Baja California Sur.

Mexico announced Friday that coronavirus cases have rebounded nationwide by 14% compared to last week, after months of declines. Hospital occupancy nationwide remains at about 17% of capacity, but in some states it has risen to worrisome levels.

Mexico has recorded over 232,300 test-confirmed COVID-19 deaths, but the government estimates the real toll is around 360,000.