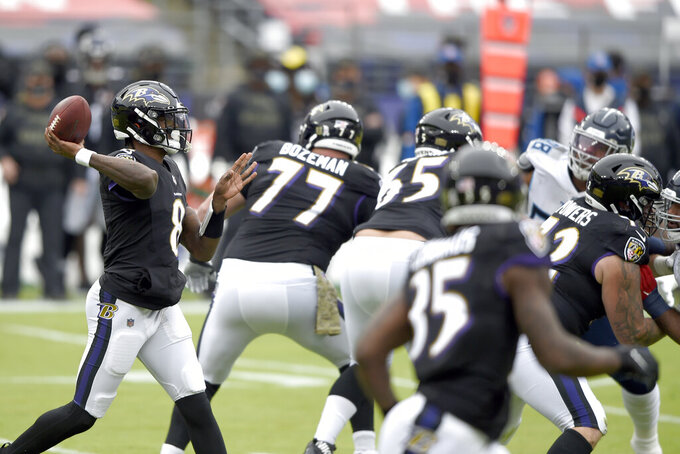 Baltimore Ravens quarterback Lamar Jackson throws a pass against the Tennessee Titans during the first half of an NFL football game, Sunday, Nov. 22, 2020, in Baltimore. (AP Photo/Gail Burton)

Wake Forest is pausing all football team activities until at least Wednesday because of recent positive COVID-19 tests and contact tracing.

The announcement came shortly after the Atlantic Coast Conference said the Demon Deacons’ home game against No. 10 Miami for next Saturday has been postponed. It also followed the cancellation of last weekend’s game against Duke in a long-running instate series, with that decision due to positive tests, quarantines and injuries.

In a Zoom call Saturday evening, athletics director John Currie said the program had a “handful” of positive tests and later referenced “four or five cases over the last four or five days.”

“Our guys are resilient and still want to play football,” Currie said. “And we’ll be looking forward to getting back out there.”

Wake Forest last played Nov. 14 in a loss at North Carolina. The Demon Deacons’ next scheduled game is Dec. 12 against No. 2 Notre Dame, a game postponed from September due to coronavirus issues within the Fighting Irish program.

Wake Forest is scheduled to close the season at Louisville on Dec. 19.

The Atlantic Coast Conference is considering options to find No. 10 Miami a game for next weekend, a person with knowledge of the matter said Saturday after the Hurricanes’ planned Dec. 5 game at Wake Forest was postponed because of coronavirus-related issues within the Demon Deacons’ program.

The ACC would have to decide by the early part of the week if there is a way to get the Hurricanes on next weekend’s schedule, according to a person familiar with the talks who spoke with The Associated Press on condition of anonymity because neither the Hurricanes nor the conference discussed the issue publicly.

The Hurricanes (7-1) have not played since winning at Virginia Tech on Nov. 14. For now, their next scheduled game is Dec. 12 against North Carolina.

The Bulldogs were scheduled to face Eastern Illinois on Sunday but called it off after one positive COVID test. When a second test also came back positive, athletic department officials announced it would not Northern Kentucky on Dec. 6 or Kansas State on Dec. 11.

School officials have not identified who has COVID, only that it came from someone in their Tier 1 group -- meaning it’s a player, coach or someone on the support staff.

They said the individual is asymptomatic, is in isolation and those deemed “close contacts” have been instructed to quarantine for 14 days. The Bulldogs (1-0) also have paused all team activities until Dec. 10. Butler is scheduled to host its next game, against Big East foe St. John’s, on Dec. 14.

The New Orleans Saints placed starting left tackle Terron Armstead on the COVID-19 list on Saturday, leaving him ineligible for Sunday’s game against the Broncos in Denver.

Players can be moved to a team’s COVID-19 list because of a positive test or because of known exposure to someone who has contracted the coronavirus.

The Saints also ruled out return specialist Deonte Harris, who had been listed as questionable a day earlier because of neck injury that kept him out of practice this past week.

The Saints, who recently had been carrying fewer than the maximum 53 players on the active roster, promoted three players from the practice squad: receiver Austin Carr, offensive lineman Will Clapp and defensive tackle Ryan Glasgow.

The San Francisco 49ers and other teams may need to find a temporary new home after Santa Clara County has banned all contact sports from holding games and practices for the next three weeks.

County officials issued the new directives on Saturday in response to rising cases of the coronavirus in the area. The rules go into effect on Monday and will remain for three weeks.

The 49ers have home games scheduled for Dec. 7 against Buffalo and Dec. 13 against Washington at Levi’s Stadium in Santa Clara. The team also practices at that site in the county. The team had immediate comment on the new rules.

The NHL hasn’t announced a date for the start of training camp but the Sharks have said they would look into alternate sites if needed.

Stanford and San Jose State also have several sports in season. The Cardinal have one scheduled home football game left on Dec. 12 against Oregon State.

The Spartans have home football games on Dec. 5 against Hawaii and Dec. 11 against Nevada. San Jose State practiced before the season a few hundred miles away at Humboldt State because of restrictions in Santa Clara County.

The Pittsburgh Steelers placed running back James Conner on the COVID-19 list on Saturday, joining three teammates already on the list as well as over a dozen Baltimore Ravens, casting further doubt on the playing a rescheduled game currently set for Tuesday.

The Steelers also announced special teams coordinator Danny Smith will not coach on Tuesday due to what the team described as an “illness.” Quarterbacks coach Matt Canada will also be unavailable due to an illness.

The announcement came the same day six more Ravens joined the COVID-19 list, an outbreak that seems to put Tuesday’s game in Pittsburgh in serious jeopardy. The game was originally scheduled for Thanksgiving night before being pushed to Sunday afternoon and then Tuesday night.

The Baltimore Ravens have placed six more players on the COVID-19 list, including outside linebacker Jaylon Ferguson and right tackle D.J. Fluker.

The moves further deplete an already thin roster ahead of Tuesday night’s game at Pittsburgh. The game was initially scheduled for Thanksgiving night before being bumped to Sunday and then Tuesday because of the Ravens' COVID-19 outbreak.

Defensive lineman Broderick Washington was also placed on the COVID-19 list Saturday, along with offensive lineman Will Holden. Two others, defensive backs Khalil Dorsey and Tavon Young, were on injured reserve before joining the list.

Ferguson has played every game this season at outside linebacker and Fluker was coming off three straight starts at right tackle.

The Ravens already had several starters on the COVID-19 list, including quarterback Lamar Jackson and running backs Mark Ingram and J.K. Dobbins.

Also on Saturday, the Ravens added receiver Dez Bryant to the 53-man roster and signed defensive back Pierre Desir to the practice squad.

The team said Saturday that Wilson will miss the game at Atlanta. Senior offensive assistant John Morton will handle Wilson’s duties on Sunday against the Falcons.

The Raiders currently have three players on the COVID-19 list: running back Theo Riddick, tackle Trent Brown and defensive back Lamarcus Joyner.

Fangio said Saturday there were no new COVID-19 cases and the team resumed on-field preparations for its game against the New Orleans Saints on Sunday.

Ohio State officials say they’re not sure when the team can practice again because of the outbreak of COVID-19 cases that forced cancellation of Saturday’s game at Illinois.

Dr. Jim Borchers, the team physician, said the decision to cancel Saturday’s game came on Friday as the numbers increased. He said the program did not meet the threshold for cases that would have forced a seven-day pause of team activities.

The third-ranked Buckeyes are scheduled to play at Michigan State next Saturday.

The Mountain West Conference canceled Saturday’s game between Boise State and San Jose State because of an “upward trend of COVID-19 cases and contact tracing” in the Broncos program.

The cancellation came a few hours before kickoff. The game was to have featured two of the three unbeaten teams in conference play. It could have been a key decider in the race for a spot in the conference championship game.

The conference said the game would be declared a no contest and there is no plan to reschedule.

The Indianapolis Colts will be without running back Jonathan Taylor on Sunday after the rookie was put on the Reserve/COVID-19 list.

He is one of three Indy starters sitting out because of COVID when Indianapolis as Indy hosts Tennessee for the AFC South lead.