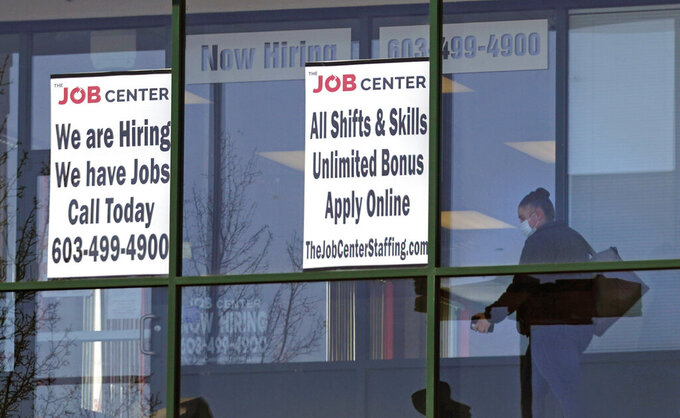 FILE - In this March 2, 2021, file photo, a woman, wearing a protective mask due to the coronavirus, walks past the signs of an employment agency, in Manchester, N.H. A new report finds that Latinas have left the workforce at rates higher than any other demographic and also have had some of the highest unemployment rates throughout the pandemic. (AP Photo/Charles Krupa, File)

PHOENIX (AP) — Teresa Marez spent 14 years building a strong clientele base as a hair stylist in San Antonio. When her son, who is autistic, had to switch to virtual learning because of the pandemic, she quit her job to help him.

It’s been 10 months, and the clients are all gone.

Marez is one of many Latinas who have been out of work since last year. Latinas have left the workforce at rates higher than any other demographic and have had some of the highest unemployment rates throughout the pandemic, according to a report by the UCLA Latino Policy and Politics Initiative, a Latino-focused think tank, provided to The Associated Press before its release on Wednesday.

That could spell trouble not just for a post-pandemic economic recovery but for the long-term stability of the country as baby boomers continue to retire and women in general are feeling compelled to leave work. And women like Marez, who has used much of her savings, are missing out on years of economic gains.

Before the pandemic, Latinas were projected to increase their numbers in the workforce by nearly 26% from 2019 to 2029 — a higher rate than any other group, the report found. It’s unclear if or how that projection will now change.

Marez isn’t sure what she’s going to do next.

Marez is thinking about going back to school to study nutrition and Spanish, but she's still working out a plan.

The UCLA study found that Latinas experienced the highest unemployment rate — 20% — of any demographic in April 2020, right after all of the business shutdowns began. By the end of 2020, when businesses were starting to reopen, Latinas and Black women still had nearly double the unemployment rate of their white counterparts, the study found.

Also troubling: the rate at which Latinas dropped from the workforce altogether, which the government usually considers to be the case when someone hasn’t actively looked for work in four weeks.

Participation in the labor force for Latinas aged 25 to 54 fell from 71% pre-pandemic to just below 67% in May 2021, according to the latest available data by the U.S. Bureau of Labor Statistics. That translates to 465,000 fewer Latinas working or seeking work.

Kassandra Hernández, a lead researcher on the UCLA report, said this is crucial to how the economy recovers from the pandemic.

“If we don’t recognize the complexities or the nuances of these narratives, of what’s happening with Latinas, we might actually be set back,” Hernández said.

Simply put: The American workforce needs Latinas to fill the many jobs that are slowly starting to come back, and those that will be left behind by retiring baby boomers.

Sylvia Allegretto, a labor economist at the University of California, Berkeley, said the U.S. economy already faces challenges from slowing birthrates, an aging workforce and declining immigration. Retirements among older Americans have also increased. A growing workforce is a key driver of economic growth.

“The long-term trend is we don’t have enough workers,” she said. “If you want to make sure you have a vibrant, growing economy, you need more people.”

But Allegretto said businesses also need to offer higher pay and better benefits so that more of those who were laid off or quit jobs during the pandemic can re-enter the workforce. That may take more time as much of the economy is still reopening from the pandemic shutdown. California just lifted all its business restrictions Tuesday, she noted.

Latinas face many hurdles. Research has shown Latinas are more likely than all other U.S. mothers to stay home with children instead of work. They also tend to do much more work at home than the men in their lives, spending twice as much time on household activities and nearly three times more time caring for household members than Latinos.

Latinas are overrepresented in low-wage jobs in the hospitality and broader service industries, stifling their upward mobility.

Hernández said women need access to child care, better pay and educational opportunities to help them overcome not just the disparities in career opportunities but the setbacks that the pandemic brought.

The pandemic forced many Latinas to leave work to care not just for their children but also for extended family — “the tios or abuelos or vecinos — you name it,” said Xochitl Oseguera, the vice president of MamásConPoder, the Spanish-language community that's part of MomsRising, a grassroots organization that works to improve women’s economic security.

Latinos were disproportionately affected by the pandemic. They were more than twice as likely to die from COVID-19 as whites, according to the Centers for Disease Control and Prevention. Their vaccination rates are much lower, too, so while many Americans feel the coronavirus is behind them, the pandemic lives in Latino communities.

Oseguera works with Latinas in different industries and hears firsthand why so many haven't returned to the workforce.

“They’re worried about going back and getting sick,” Oseguera said. “My hope is also that those jobs really reconsider the way that we have been working with essential workers to not only have a secure environment but also have access to paid family leave, paid sick leave, access to fair pay, so that we can really recover from the last year of not being part of the workforce.”

For Ciara Fernandez Faber, going back to work also depends on the work-life balance she needs to care for her toddler. Faber, who lives in Denver, left her job as an attorney when her son's preschool closed. Her husband is a doctor, and it wasn't an option for him to stay home with him.

“To my experience, like, it doesn’t matter what profession it is, it just seems like across the board it’s impacted Latina women more. I don’t know if it’s like values that we place on work-life balance or child care issues. I don’t know,” Faber said.

Galván covers issues impacting Latinos in the U.S. for the AP’s Race and Ethnicity team. Follow her on Twitter: https://www.twitter.com/astridgalvan