Laura Pausini is ready to sing at the Oscars 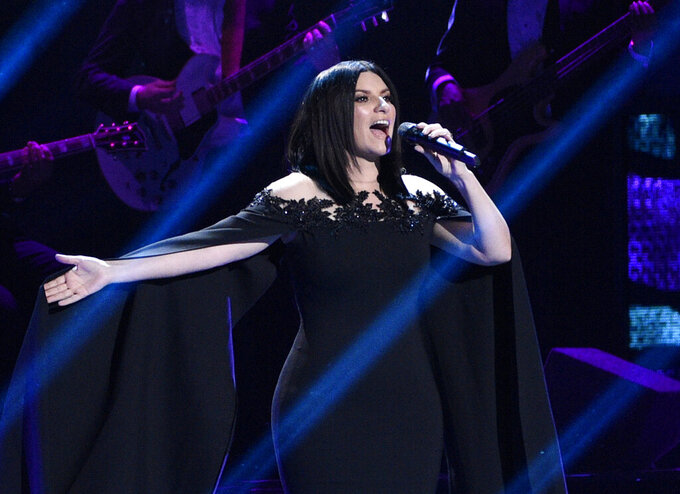 FILE - Laura Pausini performs "Lado Derecho del Corazon" at the 17th annual Latin Grammy Awards in Las Vegas on Nov. 17, 2016. Pausini will perform the Oscar nominated song "Io Si," (Seen) which she co-wrote with Diane Warren for the film "The Life Ahead." The Oscars will be broadcast on Sunday. (Photo by Chris Pizzello/Invision/AP, File)

NEW YORK (AP) — Laura Pausini was so emotionally affected by the pandemic last year that she even thought she'd never sing again. This Sunday she will do it at Hollywood's biggest event — the Academy Awards — where she will deliver a pre-show performance of the nominated song “Io sì (Seen)” from the movie “The Life Ahead.”

Co-written by Pausini and American songwriter Diane Warren, it has already received the Golden Globe and could become the first song entirely in Italian to win an Oscar.

“Honestly, I never thought or dreamed of being included in a list of awards so great and so close to the world of movies, because I never thought of having such collaboration — even though I had a song in a film with Kevin Costner and Robin Wright," Pausini told The Associated Press in reference to "One More Time," from the 1999's movie "Message in a Bottle.”

“This time it's different ... I got the call to be part of this project last July when we were still locked up in Italy, in the pandemic. I was a little bit, I don’t know how to explain it, but I thought I wasn’t going to sing anymore," she said. “So being able to sing in such an important film with a message of fraternity, of inclusion, of feeling protected by someone at a time in my life when I didn’t feel protected at all — this news was a shining light.”

Pausini spoke with The Associated Press on Thursday afternoon from Los Angeles, where she arrived two days earlier for the ceremony.

Despite being a music star with more than 70 million records sold in her almost three decades career, the Grammy and Latin Grammy winner said that when she heard about her Golden Globe and Oscar nominations she thought: “I don’t know if I deserve all this.

“I felt, and still feel, very small in front of all this greatness,” she added.

This week, while she quarantines for a few days in a rented house, she said she is proud to represent her country at the Oscars.

“It had happened with Andrea Bocelli, who is a great friend, that he sang a part in Italian while Celine Dion sang in English,” she recalled in reference to the 1999 nominated song “The Prayer”, from the movie “Quest for Camelot.”

“But for the audience to hear a song completely in Italian and the fact that a song in Italian is nominated makes me super happy," she said. I can’t wait to perform it!”

Multiple Italian musicians have won the Oscar for best original score, including Ennio Morricone, Nino Rota, Giorgio Moroder, Nicola Piovani and Dario Marianelli. But only one, Moroder, received the award for best song as co-author of “Flashdance ... What a Feeling,” from 1983's “Flashdance,” and “Take My Breath Away” from 1986's “Top Gun”.

While it is Pausini's first nomination to the Academy Awards and she already feels “like a winner,” it is Warren's 12th and the Italian singer hopes she finally wins.

“As a result, I will win too, but I think more about her happiness. This Sunday would be her father’s birthday ... and it would be very nice" for her to win, she said.” Her father, like mine with me, was the first to believe in her.”

As for who she would like to meet at the gala, Pausini mentioned “Sound of Metal” star Riz Ahmed, whom she described as “a truly incredible actor.”

Her childhood friends, nonetheless, keep asking her if she already met Brad Pitt.

“It would be very nice to see him and tell him that my classmates from school want an autograph, but I would never have the strength to ask,” she said laughing. “I would be very embarrassed.”

The 93rd Academy Awards will be aired live on Sunday at 8:00 pm EDT on ABC. Pausini's performance will be part of a pre-show that begins at 6:30 p.m. EDT.