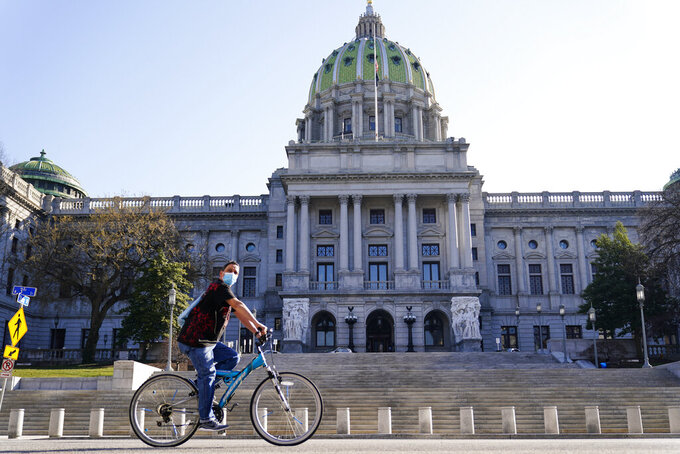 FILE - A cyclist rides past the Pennsylvania Capitol in Harrisburg, Pa., in this March 22, 2021, file photo. Pennsylvania state lawmakers are returning to session Monday, June 7, 2021 with a big June agenda and sharp differences over the future of the state's finances, schools, energy sector and election procedures. (AP Photo/Matt Rourke, File)

HARRISBURG, Pa. (AP) — Pennsylvania state lawmakers are returning to session Monday with a big June agenda and sharp differences over the future of the state's finances, schools, energy sector and election procedures.

With four weeks to wrap up work for an on-time budget, the Republican-controlled Legislature will have lots of distractions: the month is packed with lawmakers’ fundraisers and impending votes on hot-button social issues.

Republican lawmakers are also under pressure from Donald Trump to pursue a “forensic audit” of the 2020 presidential election. And the Capitol is still under a mask mandate for employees, a reminder of the pandemic that disrupted the ebb and flow of lawmaking for a year and which has driven deeper partisan divides.

Gov. Tom Wolf, a Democrat, goes into June with a top priority of securing a "historic" amount of new money for public schools.

He has reported some good fiscal news: a huge surplus since tax collections rebounded far better than expected from the pandemic's impact. Meanwhile, sitting in a state bank account is $7.3 billion of federal money from the American Rescue Plan that President Joe Biden signed in March.

Senate Majority Leader Kim Ward, R-Westmoreland, said the Republican-controlled Senate's focus is wrapping up the budget, as well as funding for public and private education, broadband and transportation.

“We’re not used to this, but we have money, we have plenty of money,” said Ward.

Meanwhile, Republicans are sorting through which elements of Wolf’s coronavirus disaster declaration to keep in place, and which to end right away. They also want Wolf to drop his effort, through regulation, to impose a price on greenhouse gas emissions from power plants, starting next year.

Central to the budget debate is the current year's surplus, which is expected to exceed $3 billion.

However, the state also used nearly $4 billion in one-time cash — much of it federal coronavirus aid — to prop up this year's $36.5 billion budget. They may need to find cash to replace much of it, as well as to cover roughly $800 million in cost-overruns.

The surplus has put aside Wolf's talk of a broad overhaul of the personal income tax, proposed in February.

But Wolf still wants more than $1 billion in new aid to public schools, almost a 20% increase. That would ensure Pennsylvania begins using its six-year-old school-funding formula in a meaningful way for the first time, without cutting funding to districts that have benefited disproportionately in the past from state aid.

“The economy is full steam ahead and we have the money to do this responsibly," Wolf's chief of staff, Mike Brunelle, said. "The governor believes that now is the time to move ahead with this historic priority.”

The proposal has strong support from Democratic lawmakers.

The formula, in part, was meant to help boost aid to Pennsylvania's poorest school districts, many of which serve big populations of African American and Latino children.

Republicans are advancing their own schools plan, which revolves around charter and private schools.

A two-bill package that passed the Senate Education Committee on Monday would give a panel dominated by lawmakers’ appointees the authority to approve charter schools — taking that power away from local school boards — and ramping up taxpayer-financing of private schools through tax credits and vouchers.

That has drawn swift opposition from Democrats and public school advocates, including the Pennsylvania School Boards Association.

Another big task before Wolf and lawmakers is to sort out how to use the billions in federal relief. That aid comes with restrictions on how it can be used, but also a long timeline, through 2024.

House and Senate Democrats have each issued a plan on how to spend the money, aiming to distribute much of it now in grants for improvements to broadband, school technology and buildings, housing programs, local governments, frontline workers and businesses.

Republicans have not floated a plan, although they have talked about spending it conservatively to bring long-term stability to state finances.