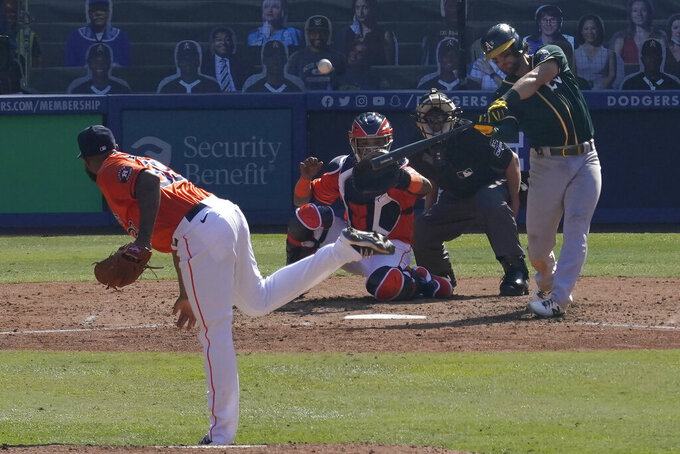 Maybe it’s the Southern California air or the atmosphere indoors in Texas, but the ball is really flying this postseason.

With Randy Arozarena, Chad Pinder, Travis d’Arnaud and others powering up, there have been 82 home runs in 28 playoff games this year through Wednesday. That average of 2.93 homers per postseason game tops the regular-season mark of 2.57. Teams outhomering their opponents are 19-1 in the postseason.

The Athletics and Astros combined to connect seven times as the A’s avoided a sweep with a 9-7 win. Houston will make another attempt to advance to its fourth consecutive ALCS in Game 4 on Thursday at Dodger Stadium.

The Atlanta Braves try to reach the NL Championship Series for the first time since the days of Chipper Jones, the Big Three and Bobby Cox when they face the Marlins in Game 3.

Kyle Wright will make his postseason debut when he starts against Miami rookie Sixto Sanchez as Atlanta aims to sweep the best-of-five NL Division Series.

The last time the Braves made it to the NLCS was 2001 with Greg Maddux, Tom Glavine and John Smoltz on the mound.

Ian Anderson, Max Fried and the current Atlanta staff has put on a Hall of Fame performance so far, throwing three shutouts in four games during this postseason.

Miami is on the cusp of losing a playoff series for the first time in franchise history after entering this round 7-0 all-time in the postseason.

Even with Giancarlo Stanton setting postseason records for power, the New York Yankees face elimination in Game 4 of their AL Division Series against rival Tampa Bay.

Stanton went deep again Wednesday night in an 8-4 loss, becoming the first player with a home run in each of his team’s first five games of a single postseason. The slugger has six homers and 13 RBIs in those five games. Daniel Murphy holds the major league mark with home runs in six straight playoff games for the Mets in 2015.

Petco Park in San Diego has yielded 16 home runs in the first three games of the series — nine by the Rays, who need one win to reach the AL Championship Series for the second time (2008).

Left-hander Jordan Montgomery makes his postseason debut for the Yankees. He went 2-3 with a 5.11 ERA in 10 regular-season starts this year and was knocked out in the first inning by Tampa Bay on Sept. 2.

Cody Bellinger and the NL West champion Dodgers can sweep San Diego in Game 3 and advance to the NL Championship Series for the fourth time in five seasons.

Los Angeles barely held on for a 6-5 victory Wednesday night in a tense ninth inning when Joe Kelly retired Eric Hosmer on a game-ending grounder with the bases loaded. But the Dodgers now have questions about their closer after Kenley Jansen's velocity diminished during a shaky outing. Jansen gave up two runs and was pulled for Kelly with two outs.

“I’m going to think through it," manager Dave Roberts said. "It was just a lot for (Jansen), 30 pitches to get two outs. I know that he’s disappointed as well. I’ll keep thinking through it.”

Cleveland manager Terry Francona is hoping his serious health concerns are behind him.

The 61-year-old skipper revealed Wednesday that he underwent several surgeries and required an extended stay in intensive care at the Cleveland Clinic this season while dealing with medical issues that sidelined him for all but 14 games.

After initially undergoing surgery for a gastrointestinal issue that had bothered him for nearly a year, Francona thought he was recovering when some blood-clotting issues led to more operations and four days in the ICU.

“It was kind of a rough time,” he said. “For a couple weeks there I was not just away from the game, I was away from everything. It was getting a little hairy there.”

ESPN, ESPN2 and ABC averaged 1,836,000 viewers for its 16 broadcasts in Major League Baseball’s expanded wild-card round, drawing far more viewers for 16 games but an average down vastly from the single-knockout contest in previous years.

The most-watched game was the New York Yankees’ opening 12-3 win over Cleveland on Sept. 29, which averaged 2,642,000 despite taking place partly opposite a presidential debate.

The round was expanded to eight best-of-three series due to the shortened season caused by the coronavirus pandemic, and games were scheduled from noon EDT until 10 p.m. EDT over a four-day span. The Rays-Blue Jays series was on TBS.