LEADING OFF: Mariners hit by virus, Mikolas back with Cards 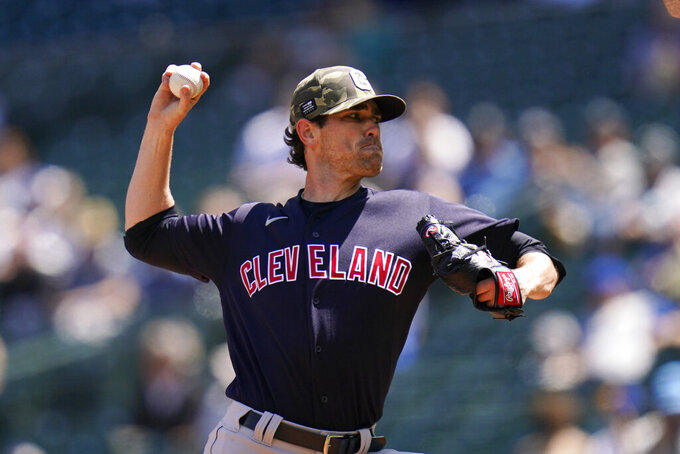 Cleveland Indians starting pitcher Shane Bieber throws against the Seattle Mariners in the first inning of a baseball game Sunday, May 16, 2021, in Seattle. (AP Photo/Elaine Thompson)

By The Associated Press (AP) — A look at what’s happening around the majors today:

Fernando Tatis Jr. and the Padres try for their eighth win in a row when they host the virus-stricken Seattle Mariners.

The Mariners lost their fourth straight Friday night, 16-1 at San Diego. Before the game, they put four relievers on the COVID-19 injured list after reporting a positive test within the team.

The Mariners did not identify who tested positive. Placed on the IL were right-handers Robert Dugger, Will Vest and Drew Steckenrider and left-hander Anthony Misiewicz.

In corresponding roster moves, lefty Aaron Fletcher and right-handers Wyatt Mills and Yohan Ramírez were recalled from Triple-A Tacoma. The trio of relievers all pitched Friday night were tagged for a total of eight runs in four innings.

Miles Mikolas returns to the majors for the first time since starting the opener of the 2019 NL Championship Series for St. Louis. He'll start for the NL Central leaders when they play the Cubs at Busch Stadium.

The 32-year-old Cardinals right-hander missed last season after surgery to repair a flexor tendon in his pitching arm. He has been on the injured list this year with a sore right shoulder.

Mikolas went 1-1 with a 3.65 ERA and 11 strikeouts and two walks in 12 1/3 innings during three injury rehabilitation outings with Triple-A Memphis.

Tampa Bay has won eight in row and looks to extend its streak with another unusual road game.

The Rays kept rolling Friday night when Francisco Mejía hit a grand slam in the 12th inning to beat Toronto 9-7. Tampa Bay has hit three or more homers in five straight games, one shy of the major league record set by the 1987 Baltimore Orioles.

Tampa Bay’s home stadium, Tropicana Field, is about 25 miles from TD Ballpark in Dunedin, where the Blue Jays are playing their third and final homestand at their spring training facility before relocating to Buffalo, New York. It means the Tampa Bay players can stay home during the four-game series.

The Blue Jays are not allowed to play in Toronto due to COVID-19 travel restrictions in Canada.

Gerrit Cole (5-2, 2.03 ERA) is on the mound for a Yankee Stadium matinee against AL MVP José Abreu and the Chicago White Sox, who arrived in town with the best record in the American League.

“Obviously, this is a tremendous offensive club,” Cole said. “It’s going to be a challenge for us. We’ll get a good measuring stick of I guess where we’re at.”

The $324 million right-hander is coming off a 5-2 loss Monday at Texas, where he allowed a season-high five earned runs in five innings. His 85 strikeouts are the most by a Yankees pitcher through the first nine starts of a season, according to the Elias Sports Bureau.

Indians ace Shane Bieber (4-3, 3.17) starts at home against Minnesota after lasting a season-low 4 2/3 innings in a 3-2 loss at Seattle in his previous start.

Buehler now faces the Giants on the road. He is 4-0 in seven games against San Francisco.