LEADING OFF: No-hit streak, Davis down, Cueto vs Reds 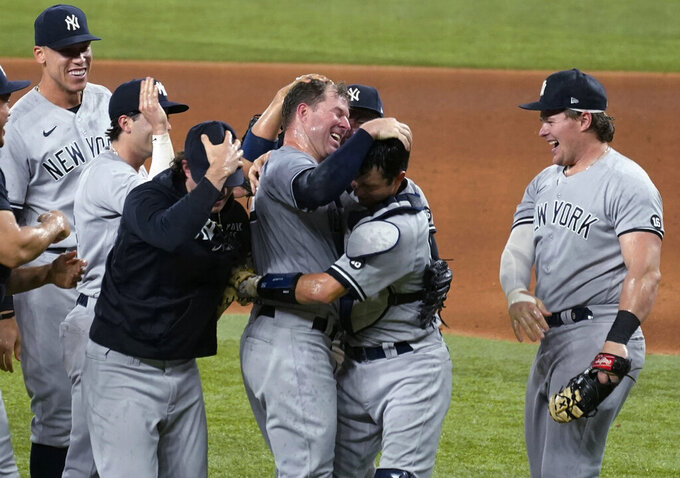 New York Yankees starting pitcher Corey Kluber, third from right, celebrates with catcher Kyle Higashioka, second from right, and the rest of the team after throwing a no-hitter against the Texas Rangers in a baseball game in Arlington, Texas, Wednesday, May 19, 2021. (AP Photo/Tony Gutierrez)

After no-hitters on consecutive nights by Detroit right-hander Spencer Turnbull and Yankees newcomer Corey Kluber, is there a pitcher on the docket who can make it three days in a row?

Kluber fired the sixth no-hitter in the majors already this year, leading New York over the Texas Rangers 2-0 on Wednesday. That marks the most this early in a season — seven in one year is the modern-era record — and four have come in a 15-day span.

The two-time Cy Young Award winner came within a four-pitch walk to Charlie Culberson in the third inning of throwing a perfect game.

It was the first time there were no-hitters on consecutive days since 1969, when Cincinnati’s Jim Maloney threw one on April 30 and Houston’s Don Wilson on May 1. There were two no-hitters on June 29, 1990, by the Los Angeles Dodgers’ Fernando Valenzuela and Oakland’s Dave Stewart.

Kluber (4-2) struck out nine during the 12th no-hitter in Yankees history, the 11th in the regular season and the first since David Cone’s perfect game against Montreal on July 18, 1999. It was New York’s first on the road since Allie Reynolds at Cleveland on July 12, 1951.

The four no-hitters in May are the most in a month since June 1990. It is also the first time three teams have been no-hit twice in one season, with the Rangers joining Cleveland and Seattle.