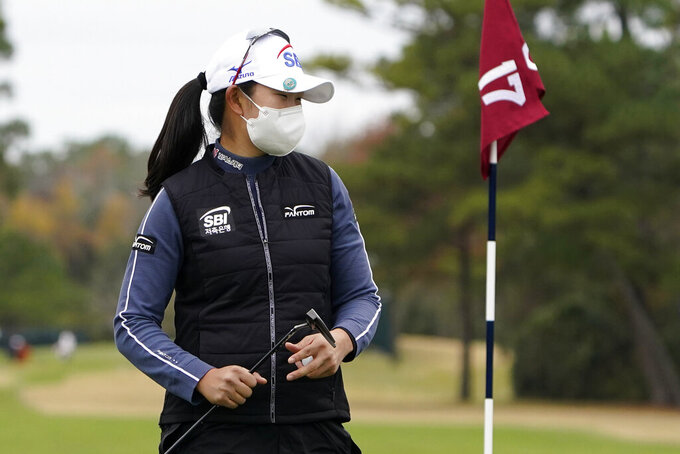 A Lim Kim, of South Korea, reacts after making a birdie on the 17th hole during the final round of the U.S. Women's Open golf tournament, Monday, Dec. 14, 2020, in Houston. (AP Photo/Eric Gay) 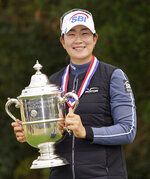 HOUSTON (AP) — The Bermuda grass of south Texas was unlike anything A Lim Kim had ever seen. The U.S. Women's Open, with its reputation as the toughest test, was a major she had never played.

What didn't change in a frigid final round at Champions Golf Club was how to keep score. And when the 25-year-old from South Korea saw she was trailing and running out of holes, she started attacking flags.

Kim birdied her final three holes and tied the record for the largest comeback in a U.S. Women's Open, rallying from five shots behind with the a 4-under 67 to win the biggest event in women's golf.

“Still can’t really soak in that I’m the champion,” she said, minutes after being soaked in champagne on a day with temperatures in the 40s.

She won by one shot over Jin Young Ko, the top-ranked player in women's golf, and Amy Olson, who played her heart out while coping with the grief of her father-in-law's unexpected death Saturday night in South Dakota.

“I felt very weak and helpless the last couple days, and probably today on the golf course,” Olson said, fighting back tears after a 72. “I really believe the Lord just carried me through. It just makes you realize how much bigger life is than golf. But pleased with my finish overall and my performance.”

Kim's spectacular finish made it tough for anyone to catch her. Two shots behind Olson, she hit 5-iron to 4 feet on the par-3 16th hole to get to 1-under. Then she hit 8-iron that rolled out to just inside 2 feet on the 17th for a tap-in birdie and a share of the lead. She capped it off with a pitching wedge to just inside 10 feet.

Behind her mask — fitting that the final major champion of this pandemic-disrupted year in golf was wearing one — the thrill was evident. So was the fist pump, a rare show of emotion for Kim.

“I’ve been eyeing the leaderboard throughout the round and I knew how many shots I was back,” she said through a translator. “That’s probably the reason why I tried to hit more aggressive, tried to attack the pins.”

Kim started the final round, delayed to Monday because of rain, in a tie for ninth. No one had ever started in a position that far back and won the U.S. Women's Open. She became the seventh player to rally from five shots behind in the final round, and the first since Annika Sorenstam at The Broadmoor in 1995.

Olson held her own amid her heavy heart. Winless in seven years on the LPGA Tour, she had a two-shot lead on the back nine after 54-hole leader Hinako Shibuno faltered. But she couldn’t do anything about Kim’s late charge, and Olson fell back when her hybrid on the par-3 16th bounded over the green and into thick, brown rough, leading to bogey.

She birdied the final hole for a 72 after Kim had already secured the title.

Olson was singing Josh Groban's “You Raise Me Up” to keep her in the right frame of mind. She couldn't think of many shots she wanted back after three early bogeys. The cold weather, the mud-splotched golf balls and the U.S. Women's Open test helped keep her mind from wandering.

“I knew I had to stay very mentally disciplined just to get through the day,” Olson said. “I allowed myself to think about what I'm grateful for, and I've got a long list.”

Ko, the No. 1 player who only recently returned from South Korea where she rode out the COVID-19 pandemic, also birdied the 18th when it was too late to catch Kim.

Ko closed with a 68, one of only six players to break par in the final round.

Kim finished at 3-under 281 and won $1 million. She added to South Korean dominance of this major, the ninth winner in the last 13 years.

Shibuno was trying to win in her first try at a second major, having won the Women's British Open last year in her first tournament outside Japan. Her short game only carried her for so long, however, and she fell out of the lead by starting the back nine with consecutive bogeys.

Shibuno birdied the 18th hole for a 74 and finished two behind. Only four players finished under par.

A two-time winner on the Korean LPGA, Kim got into the U.S. Women's Open off the world ranking when the pandemic kept the USGA from conducting open qualifying. She had slipped to No. 94, the lowest-ranked player to win the Open since the women's world ranking began in 2006.

She is the second non-LPGA member to win a major this year, joining Sophia Popov at the Women's British Open. She also is the third South Korean to win a major. Second-ranked Sei Young Kim won the Women's PGA and Mirim Lee won the ANA Inspiration — also at No. 94 in the world.

Texas senior Kaitlyn Papp birdied the 18th for a 74 to finish at 3-over 287, six shots behind in a tie for ninth, to be the low amateur.